Home News Students from Overseas Seek the Path in Jiba

Students from Overseas Seek the Path in Jiba 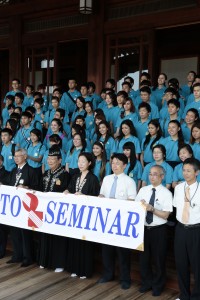 The Oyasato Seminar was held once again this summer in the Home of the Parent. The Portuguese Course, the Chinese Course, and English Courses I and III began on July 10, and the Korean Course began on August 5. The seminar is an annual summer event giving young people from overseas (high-school-age bracket) an opportunity to gather in Jiba and spend about two weeks learning and implementing Oyasama’s teachings. This year’s seminar drew 86 students from the following 11 countries and regions: Australia, Brazil, Canada, Hawaii, Hong Kong, Saipan, South Korea, Taiwan, Uganda, the U.K., and the U.S. mainland. There were also a total of 80 staff members including lecturers and counselors from overseas.

At the opening ceremony, Overseas Department Vice Head Michitaro Masuno delivered an address, in which he said, “I hope this seminar will help you feel the warmth of the everliving Oyasama during your stay in Jiba, understand the essence of the path that your parents and forebears have followed, and savor the joy of helping others.” After the ceremony, participants and staff members performed a prayer service in the South Worship Hall.

The Oyasato Seminar was originally started in 1984 to help nurture successors of the path living overseas. In recent years, increasing numbers of students have been encouraged to take part in the seminar by their parents, who previously completed the seminar. Some of the participants are first-generation followers who came to know the teachings through their friends or acquaintances. 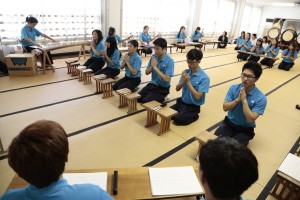 The program can be roughly divided into two parts, the first half of which took place in the Home of the Parent. Students in English Course I, the Chinese Course, and the Portuguese Course attended lectures on the basic teachings as well as practice sessions for the dance and the musical instruments for the service.

Michelle Parker, a 16-year-old student who belongs to San Diego Church in the United States, participated in this year’s English Course I after receiving encouragement from her sister, who completed the seminar last year. “Although I’ve had some opportunities to listen to the teachings of the path from my church head minister and my parents, I have never had formal lectures before. It is a very good opportunity for me to think about what a Tenrikyo-based life is.” 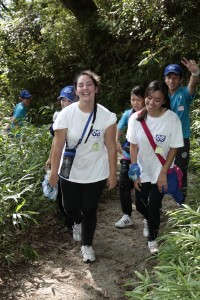 As the culmination of the first half of the program, students in English Course I, the Chinese Course, and the Portuguese Course crossed the Jusan Pass on the afternoon of July 16. In the intense summer heat, students walked back to Jiba while encouraging one another.

Meanwhile, students of English Course III, which is designed for those who have completed Course I in Jiba and Course II held regionally, spent four days with members of the Precincts Section of Church Headquarters standing guard in 24-hour shifts and engaging in hinokishin activities in the Sanctuary precincts on a day shift.

In the second half of the seminar, the four courses went to Aichi, Ishikawa, Hyogo, and Okayama prefectures, respectively, to engage in spreading the name of God, giving roadside speeches, and doing door-to-door missionary work with local missionaries. Most of the students in English Course III received the truth of the Sazuke on July 18. On the next day, the students of English Course III went to Aichi Prefecture to engage in missionary work. 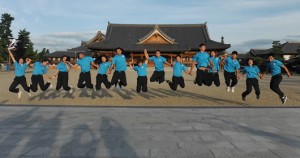 Julia Hamae Yuge, a 17-year-old student who belongs to Heritage Church in Los Angeles, said: “I made a resolution to administer the Sazuke ten times during this four-day missionary work. I had an opportunity to administer the Sazuke to the first person I met on the first day of this missionary work. That was when I made this resolution, thinking that God is encouraging me.” She had administered the Sazuke nine times by the morning of the last day. After performing a prayer service at 9:00 a.m. on the last day, July 22, students of English Course III and some missionaries went out and engaged in door-to-door missionary work in Nagoya with the temperature exceeding 36˚C (96°F). On this day, Julia administered the Sazuke three times, thus fulfilling her resolution. “Through this seminar,” she said, “I had invaluable experiences and got energy to keep going. I would like to continue to administer the Sazuke to those who are suffering from illnesses in order to become a Yoboku who can help others be saved.” 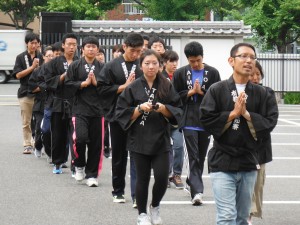 The Chinese Course as well as English Courses I and III came to an end on July 25, the Portuguese Course finished on July 27, and the Korean Course ended on August 17. All students received the certificate of completion from Overseas Department Head Yoichiro Miyamori.