Sponsored by the Education and Nurture Department, the Head Ministers Seminar in Oyasato was held from June 27 to 29. This seminar is designed for those with three to five years of experience in serving as head ministers or their spouses. Offering various activities, this seminar aims to help them reaffirm their role and engage in salvation work ever more vigorously. The seminar—which took place about halfway through the first year of the “three years, one thousand days” season leading up to the 130th Anniversary of Oyasama—drew a total of 239 head ministers and their spouses. In his opening address, Education and Nurture Department Head Yoshiyuki Nakano encouraged the participants by saying, “I hope that, during the seminar, you will find as many clues as possible that help you conduct the anniversary-related activities.”

A variety of activities were offered during the seminar under the theme “The Mind of Saving Others.” One of the activities was a group discussion where the participants divided into 32 groups to discuss the importance of listening. One of the participants was Rev. Manami Onuma—51-year-old head minister of Numadate Branch Church in Yokote, Akita. Four years ago, she lost her husband, then head minister of the church. After encountering the knot of her husband’s passing away for rebirth, she became the head minister. With the conviction that nothing could be brought about without taking actions, she resolved to hand out 800 copies of Ningen Ikiiki Tsushin (“Message That Makes Humans Vibrant”) every month. She said: “I was wondering what was important for engaging in salvation work. My hope was to grasp its fundamentals. I would like to keep my mind humble and work with people in need, so that I can establish a trusting relationship with them.”

During the two-day seminar, a total of 13 section meetings were organized under the themes “Nourish the Mind of Saving Others” and “Prepare Our Minds to Conduct Salvation Work.” Among the section meetings, 11 were run by lecturers who shared their experiences of studying and implementing the teachings to save others. They spoke on such topics as “Church with Warmth That Attracts Parents and Children” and “Working with Those Who Suffer from Schizophrenia.” Rev. Yoshihiko Uetani—55-year-old head minister of Masukagami Branch Church in Nagaokakyo, Kyoto—said: “Someone in my immediate circle is suffering from schizophrenia, so I have been searching for a way to work with that person. Besides performing prayer services, I will make sure I am always there for the person as I try to help save that person, taking one day at a time.” Following each section meeting, there was a group discussion that allowed the participants to reflect on the section meetings they had attended and share their ideas on how to apply what they learned to their salvation work. 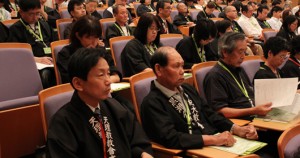 On the last day of the seminar, Director-in-Chief of Administrative Affairs Yoshitaro Ueda delivered an address, in which he explained the spirit of Instruction Three and called upon the participants to perform the activities for the anniversary of Oyasama in high spirits. Rev. Michinori Yoshida is 32 years old and in his fifth year as head minister of Hokutatsu Branch Church in Tsubetsu, Hokkaido. He said: “Now is a season for salvation. I have been shown God’s miraculous workings more often while engaging in helping save others who are suffering from illness or other troubles. The seminar provided a good opportunity for me to reaffirm my commitment to the path as a head minister. Making the most of what I have learned during the seminar, I would like to make further efforts to perform salvation work.”