Sponsored by Tenri University and the School of Oriental and African Studies (SOAS), the University of London, an exhibition is being held under the title “1000 Years of the Art of Japanese Books: Treasures from Tenri Central Library” at Brunei Gallery of SOAS from April 18 to June 22, 2013. This exhibition commemorates the academic exchange agreement concluded between these universities in 2011 and is also a part of cultural events that celebrate the 400th anniversary of Japan-U.K. relations. A total of 41 Japanese antiquarian books, manuscripts and documents held by Tenri Central Library are being exhibited and drew some 3,500 people in the first two weeks, which is a record for the gallery.

SOAS was founded in 1916 as one of the schools of the federal University of London. The school has a library that holds more than a million books in over 4,000 languages and two museums that collect valuable materials. Brunei Gallery, which is the venue of the exhibition, is housed in one of these museums.

The 41 items exhibited include Hyakumanto Darani (One Million Pagodas and Dharani Prayers), which is the world’s oldest traceable printed matter whose production date is clearly identified; manuscripts of The Tales of Ise and The Tale of Genji; and handwritten manuscripts by famous writers of the modern era.

Regarding the exhibition, Professor Andrew Gerstle, head of the Department of Japan and Korea, says, “The exhibition is an excellent selection of Japan’s cultural treasures that shows the wide range of Japan’s history of books and the various formats and styles over the many centuries.” 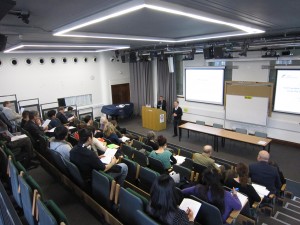 On April 30, a reception was held to commemorate the exhibition and was attended by approximately 100 people including officials from Tenri University and SOAS, as well as those from universities and libraries in the U.K. and museums in France. Speaking at the reception, Tenri University President Masahiko Iburi touched upon the history of how Tenri Central Library was established and expressed his hope that the exhibition would help deepen understanding of Japan and cultivate a sense of affinity with Japan, thereby strengthening the ties between Japan and the U.K. He then voiced his expectations for the further development of exchanges between Tenri University and SOAS.

Some commemorative events are taking place along with the exhibition. Tenri University Professor Hideo Yamanaka and Vice President Tadayoshi Ohashi gave lectures on April 19 and 30, respectively, and shared stories about the antiquarian books from their specialized perspective. Tenrikyo volunteers have also been holding workshops that were organized to introduce some aspects of Japanese culture such as Japanese calligraphy, tea ceremony, origami, and gagaku music, all of which added color to the exhibition. 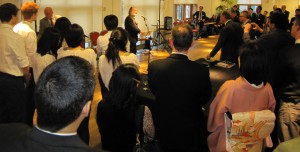 Dr. Laura Moretti, a lecturer at the University of Cambridge, has visited Tenri twice. Pointing out that Tenri Central Library holds plenty of valuable documents, she said that without the library it might be impossible to advance the research of Japanese culture. She commented that this time, many antiquarian documents having crossed the sea, she was deeply moved to be able to see them in the U.K.

Mr. Hamish Todd, a curator at the British Library, was greatly impressed with the quality and value of each of Tenri Central Library’s antiquarian documents. Admiring and regarding the library’s management and arrangement of these documents as meeting world standards, he said that the exhibition is truly significant as it offers visitors a panoramic view of the entire 1,000 year-history of Japanese antiquarian documents.

Professor Paul Webley, who serves as director of SOAS, expressed his gratitude to the officials from Tenri for the opportunity to hold the exhibition, which he said was particularly suitable for commemorating the 400th anniversary of Japan-U.K. relations. He hoped that the exhibition would further promote exchange between the universities.