On April 25, Tenri Yotokuin Children’s Home conducted a ceremony—honored by the presence of the Shinbashira and Women’s Association President Harue Nakayama—to commemorate its 100th anniversary with an attendance of 1,452 people concerned with social welfare.

After opening remarks were made by Mr. Hiroshi­ Miyazaki, director of the children’s home, the Shinbashira took the podium to deliver an address. He started with words of appreciation for the participants’ daily contributions to the cause of human welfare. He then made clear that the purpose of opening the facility was to embrace children from challenging family environments and fulfill parental roles in nurturing them to become fine adults. He went on to speak about how the first Shinbashira, Shinnosuke Nakayama, at the time of the opening of the facility, indicated its mission and the attitude appropriate for its nurturers in the following verse: “Loving children of others in the same way you love your own, please nurture them accordingly, the people of this path.” 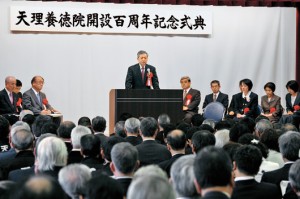 Then the Shinbashira described the efforts of the first president of the Women’s Association, Tamae Nakayama, who, as the first director of the facility, strove to build its foundation. He also noted that the first Shinbashira’s intention had been maintained as the fundamental principle of the facility throughout its history. Even though its name and management body changed over time, those involved in managing the facility, he said, “have always focused on how to implement and embody the principle that has been passed down to them.”

Turning his attention to the present, he said, “Mirroring the current state of society—which is said to be more and more chaotic—Yotokuin seems to have to deal with complicated issues that it did not face before.” Noting that the children’s home is now looking after more and more children who are from non-Tenrikyo families, he acknowledged that “it is far from easy to gain trust and understanding from the parents who do not share the same religious background.” As a way to address the weakening ties between parents and children in society, he said, “I want you nurturers to cultivate solid faith and conviction that will help you interact with children.”

He went on to say, “We are taught that we ought to be able to provide a convincing insight into the truth of the teachings through the way we lead our lives.” As far as the children’s home is concerned, he continued, “not only must you become good childcarers who can be trusted to fulfill parental roles, but you also need to conduct yourselves appropriately as the children of the path, Oyasama’s children. What this means is that you should be focused on thinking and behaving in accord with Oyasama’s Divine Model.”

He added, “It is also important for you to acquire and cherish the spirit of single-heartedness with God as your predecessors did.” After noting that the facility is now well-equipped and well-established and can provide a broader range of activities, he said, “If you wish to receive blessings that enable buds to sprout from knots, you must return your thoughts to the origin and take fresh strides as you engage in social welfare.” He concluded his address by saying: “On the auspicious occasion of the 100th anniversary, I would like to ask you to continue to make steady and united efforts based on the facility’s founding spirit. In response to your efforts, God will give you blessings enabling buds to sprout from knots in such a way that the facility can measure up to the expectations of the general public and set an example for Tenrikyo’s other social welfare activities.”

Billing this year as the 100th anniversary year for Tenrikyo’s social welfare activities, the Social Welfare Foundation Tenri—the management body of the children’s home—and the Social Welfare Section of the Mission Department are organizing various commemorative events throughout the year.