On March 28, this year’s Students’ Spring Pilgrimage to Jiba, cosponsored by the Students Association and the Students Advisory Committee, was held in the Home of the Parent under the theme “Spreading the Parent’s intention to our fellow students in the world: Let’s embark on the path in unity of mind!” Honored by the presence of the Shinbashira and his wife, the convention held in the Inner Courtyard of Church Headquarters was attended by approximately 4,900 high school- and college-age students from all parts of the country.

Chapters at each diocese and directly supervised church had worked hard to prepare for the event, including visiting churches and contacting members to promote participation. Kyoto Diocese, for instance, not only made a promotional video for the event but also posted it on YouTube, a video-sharing website, so that more students could watch it.

At 8:00 a.m., the participants began to file into the Inner Courtyard, carrying placards and banners of their dioceses or directly supervised churches. The convention began at 9:20 a.m. when the Shinbashira and Mrs. Nakayama arrived in the Inner Courtyard, which was covered with the participants’ umbrellas of different colors. After singing the Eight Verses of the Yorozuyo, Students Association Chairperson Koki Jinno made opening remarks, in which he said, “Bearing in mind the Shinbashira’s words, which will serve as our association’s guideline this year, let’s walk the path together toward the realization of the Joyous Life World.” 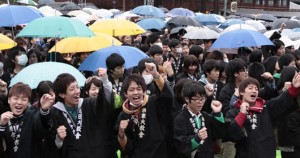 The Shinbashira then took the podium to deliver his address. Noting that the 130th Anniversary of Oyasama will be observed in three years, he said all of us followers of this path are now working to prepare for the anniversary with our minds united as one. He stressed the importance of holding Oyasama’s 50-year Divine Model close to our hearts, saying, “Perceiving Her footsteps as something distant and far removed from us falls short of Oyasama’s expectations.” Quoting a passage from a Divine Direction that teaches, “Because of My love for you, My children, the Parent shortened Her life by twenty-five years to step out and save the world from now” (Osashizu, January 26, lunar calendar), the Shinbashira explained Oyasama’s parental love with which She consistently encouraged people to implement the Service until She withdrew from physical life. He then clarified the meaning of observing an anniversary of Oyasama by saying, “It is to respond to Her parental love for children, the love with which Oyasama withdrew from physical life.” The Shinbashira told the members that it is necessary to strive to understand the true intention of Oyasama in Her Divine Model and asked them to carefully consider the fact that we might end up making Oyasama sad if we misunderstand Her intention while focusing only on outward form or getting caught up in our own thinking.

The Shinbashira next said that, while it is true that the members are at an age where they are responsible for themselves because it is taught that we are provided for by God according to the state of our own mind from the age of fifteen, it is important to talk to people who have more experience and knowledge and to discuss things with them. He urged the members to make proactive efforts as students over the next three years leading up to the 130th Anniversary of Oyasama while going through various experiences and learning many things. “I want you to find out what you can do for the path and carry it out,” he said.

To conclude his address, the Shinbashira referred to the importance of administering the Sazuke and expressed his hope that the members will thoroughly study the path that was laid by Oyasama and make efforts to cultivate their faith by taking advantage of their youth.

This was followed by speeches given by two association members who talked about their joy of faith and the gratitude they feel toward fellow members. Seishiro Sugita, who had been appointed to serve as the association chairperson starting on April 1, then made a pledge on behalf of all association members.

After the convention, members participated in activities organized by their respective directly supervised churches to strengthen their bonds. Also, 431 students, including 118 first-timers, attended the Besseki lectures in the afternoon.