Missionaries from various age-groups and backgrounds live together at missionary houses while devoting themselves to sprinkling the fragrance of the teachings and engaging in salvation work for one year. On March 29 and 30, a preliminary seminar for new residents of missionary houses was held in the Home of the Parent. This year, a total of 87 new missionaries (66 men and 21 women), ranging in age from 19 to 67, will spend the next 12 months at one of 15 missionary houses located across Japan. The number of new residents, both for men and women, exceeds that of the previous year.
On the 30th, following Church Headquarters’ morning service, the new missionaries assembled in Foundress’ Hall No. 3 to listen to a talk given by the Shinbashira. He started by explaining that the purpose of a missionary house is to provide an environment which allows its residents to concentrate solely on spreading the teachings, saying, “Starting today, your job is to sprinkle the fragrance of the teachings every day.” He urged the new residents to spend the year in a way that would benefit them when they continue to engage in the tasks of the path in the future.
Next, the Shinbashira explained at length the appropriate attitude to maintain in sprinkling the fragrance and engaging in salvation work. He emphasized the importance of giving serious thought to learning how to explain the teachings so that people will listen to them and understand the teachings. He said, “The significance of living in a missionary house lies in internalizing the teachings through studying and practicing them.”
Before closing, the Shinbashira encouraged the listeners by saying, “I would like all of you to make good use of the time you will spend at your respective missionary house so that, at the end of the year, people around you as well as you yourselves will recognize that you have taken a step or two closer to spiritual maturity.”

Rev. Umeo Izutsu, chief of the Mission Department’s Mission I Section, said: “In the lead-up to Oyasama’s 130th Anniversary, many people applied to enter the missionary houses. I would like you new residents to proactively seek people who are suffering from illnesses or other troubles, cultivate the mind of helping others be saved through administering the Sazuke, and walk the path of making progress in your spiritual growth by working hard and learning from one another.” 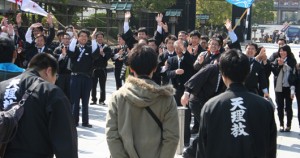 On March 27, before this preliminary seminar, a gathering was conducted at Moya 38 for the 75 people who had just finished spending the last year at the 14 missionary houses. Their accomplishments for the year included returning to Jiba 300 times (including pilgrimage groups), bringing 1,730 people to Jiba, administering the Sazuke 47,962 times, having 87 people attend the Besseki lecture for the first time and 150 people attend a subsequent Besseki lecture, and leading five people to receive the truth of the Sazuke, two people to enroll in Shuyoka (the three-month Spiritual Development Course), and 72 people to attend the Basics Course.