The February Monthly Service of Tenrikyo Church Headquarters was conducted on the 26th, with the Shinbashira presiding as chief officiant.

With a severe chill lingering over several days, it was spring in name only at the Home of the Parent. On the morning of the Service, the cold weather eased as gentle rays of sunshine shined down on the Sanctuary precincts.

After expressing appreciation for God the Parent’s boundless blessings, the Shinbashira said in the Service prayer, “We Service performers as well as church head ministers and Yoboku will make a befitting and decisive response to Oyasama’s parental love in this seasonable time of the first year of our pre-anniversary activities and, with an awareness of our mission to sprinkle the fragrance of the teachings and engage in salvation work in unity of mind and single-heartedness with God, we are determined to strongly advance our efforts for the salvation of one and all.” 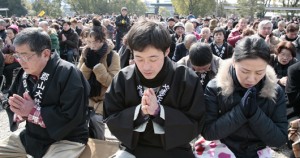 Honbu-in Mantaro Yoshikawa then delivered the sermon. He mentioned we are almost at the end of the second month of the first year of the “three years, one thousand days” period leading up to the 130th Anniversary of Oyasama. He then went on to talk about how in last year’s Autumn Grand Service sermon the Shinbashira talked about the importance of performing the Service in unity of mind and single-heartedness with God as well as how the emphasis in Instruction Three is on salvation work.

Rev. Yoshikawa went on to say that it was important to perform the Service while seeking to save others and that salvation work begins with a prayer. He then pointed out that building merit, sowing seeds of sincerity, and making a resolution were vital when we pray. He said, “We must receive the truth of Jiba, pray for the settling of the world and the salvation of others, and perform the Service with seriousness so that God the Parent and Oyasama can accept our prayers.”

He then touched on the topic of service performers who are assigned to play the musical instruments at regional churches, saying: “Each performer must complete his or her assigned role without making any errors while paying attention to the whole, striving for harmony, and aiming to perform the service in unity of mind. One must not allow one’s habits and temperament to affect one’s performance.” Explaining that the assigned dancers base the movements of their entire body on the rhythm provided by the musical instruments, Rev. Yoshikawa said: “When players of the musical instruments watch the movements of all the dancers, it becomes easier for them to play in rhythm. This is an example of what it is to respect and help one another. When all the performers can perform in unison, it helps the service performance become even more spirited.”

Rev. Yoshikawa then talked about his experience as an instructor at a musical instruments workshop in South Korea 30 years ago. Followers spoke passionately of their conviction that they could connect their hearts with Jiba through the service. He also recalled how one of the followers leaned on God and partook of the sacred rice during the service practice, which led to a sudden reduction of a high fever. He said this led him to spiritually reexamine himself and renew his attitude.

He went on to say that the Service and engaging in missionary work are like the two wheels of a cart on the path of world salvation and mentioned that a “Yoboku’s Gathering” will be held in Jiba for Yoboku and followers who belong directly to Church Headquarters. He described how he visited a Tenrikyo family whom he had not seen for some time and discovered that there was an unthinkable misunderstanding on their part. After Rev. Yoshikawa talked with them and cleared the misunderstanding, the family members agreed to take part in the Yoboku’s Gathering together. He said that this led him to realize that the principle of the season was at work and felt the importance of paying attention to and taking proactive steps to visit those around him.

In conclusion, Rev. Yoshikawa said: “The Shinbashira, who stands at the forefront of the path of single-hearted salvation, announced Instruction Three to all Yoboku and followers so that we can make decisive efforts to grow spiritually and conduct our activities in unity of mind in anticipation of the 130th Anniversary of Oyasama. Let us follow him and make firm efforts to ‘add flesh’ to his intention. . . . Let us aim to fulfill our resolutions in our respective roles and positions and pledge together to do all that we can over these ‘three years, one thousand days.’”