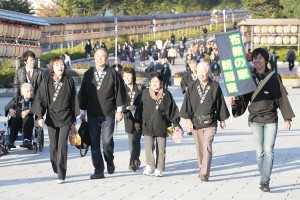 On October 26, the Autumn Grand Service took place at Church Headquarters’ Main Sanctuary in commemoration of the Teaching’s day of origin with the Shinbashira presiding as chief officiant. About 85,000 followers returned to Jiba in adoration of Oyasama both from across the country and from overseas. After the completion of the Kagura Service and the Dance with Hand Movements, the Shinbashira delivered the sermon, in which he announced Instruction Three as guidelines for activities leading up to the 130th Anniversary of Oyasama to be conducted on January 26, 2016. Taking to heart the Shinbashira’s words “During this pre-anniversary season, I would like as many Yoboku as possible to grow to a point where they can implement salvation work,” followers pledged to take great strides along the path of single-hearted salvation with renewed minds. 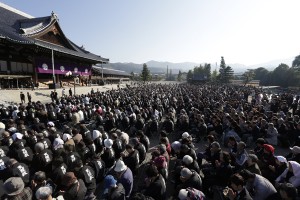 Shortly after 8:00 a.m. the Shinbashira and other Service performers paid their respects at the Foundress’ Sanctuary and the Memorial Hall before proceeding to the Main Sanctuary. The Shinbashira then read the Service prayer, in which he first expressed gratitude for God’s parental guidance and care. He went on to say: “Today, I would like to announce Instruction Three in the hope of helping unite our minds in preparation for the 130th Anniversary of Oyasama. . . . We humbly ask You to accept our resolve to multiply our efforts in salvation work while seeing the current season as an important juncture. As we proceed on the path of single-hearted salvation by implementing the Service and the Sazuke, we also ask with reverence for Your marvelous blessings that can help purify our minds and enhance our sincerity ever further and for Your guidance that can bring us even one step closer to the Joyous Life World where the truth of heaven shines.” 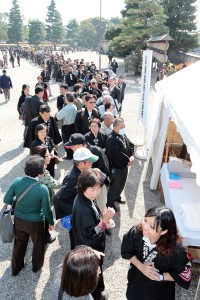 The Shinbashira then took the lectern to deliver the sermon, in which he emphasized the importance of replacing one’s self-centered mind with a mind of saving others. Referring to several anecdotes of Oyasama, he said: “We can see that Oyasama tells people who seek salvation to help others be saved and instructs those who wish to make repayment for their salvation to work for the salvation of others.” His topic shifted to the 130th Anniversary of Oyasama, the purpose of which he said is to bring joy to Oyasama by showing Her a new level of spiritual growth attained through decisive and united efforts in anniversary-related activities. After reading Instruction Three to the congregation, he ended his sermon by saying, “Regardless of how things are in the world at large, we need to fulfill our mission in order to reconstruct the world as the Joyous Life World.”