Five delegates of Tenrikyo attended the International Meeting of Prayer for Peace held in Sarajevo, the capital of Bosnia and Herzegovina, from September 9 to 11. Organized by the Community of Sant’Egidio—a lay Catholic group headquartered in Rome—in close collaboration with other religious groups, the meeting featured a total of 28 panel sessions on international and global concerns and prayers for world peace and drew about 250 religious leaders and government officials from many parts of the world. The Tenrikyo representatives included Honbu-in Ichiro Yokoyama, Europe Centre Head Yoshihisa Hasegawa, and Dai-Roma Mission Station Head Hideo Yamaguchi.

The meeting followed on from the World Day of Prayer for Peace convened in 1986 by the late Pope John Paul II, who invited religious leaders from across the world to gather in Assisi, a Catholic holy site in Italy. From the next year on, the Community of Sant’Egidio took the initiative to hold the meeting in a different city in Europe every year. Tenrikyo has participated in the meeting almost every year. In addition, because of local followers’ connection with the community, Tenrikyo has been asked to offer help behind the scenes. This year, a follower living in Italy and two staff members of the Overseas Department were involved in the event as interpreters.

Dialogue under the Theme “Living Together Is the Future”

Bosnia and Herzegovina is a multi-ethnic and multi-religious country with three major ethnic groups, namely Bosniaks, who are predominantly Muslim; Serbs, who are mainly Orthodox Christian; and Croats, who are primarily Catholic. In commemoration of the 20th anniversary of the onset of Bosnia’s civil war, the meeting was entitled “Living Together Is the Future: Religions and Cultures in Dialogue.”

Honbu-in Yokoyama served as a panelist in a session on “The Spirit of Assisi in the East: Japanese Religions in Dialogue,”—held on the 10th—where the panel also included representatives from Tendai Buddhism and Rissho Kosei-kai. He started his speech by referring to the teaching of the Joyous Life, the purpose of God the Parent’s human creation, and explained in an easy-to-understand manner that the Tenrikyo faith, based on Oyasama’s Divine Model, aims at bringing happiness and peace to all human beings in the world.

As the chair of the board of directors of Tenri Yorozu-sodansho Foundation—management body of Ikoi-no-Ie Hospital—Rev. Yokoyama went on to speak about unique aspects of the hospital. He mentioned that Tenrikyo ministers serving at the hospital provide spiritual care for patients and offer prayers through the administration of the Sazuke while working in cooperation with doctors and nurses. “I think all religious people appreciate the importance of prayer, which is instrumental in helping patients recover from their illnesses,” he said, adding, “There is no discrimination or distinction in this regard between Tenrikyo followers and followers of other religions in our hospital.”

He continued: “I believe that religions exist in order to save and deliver people from their distresses and afflictions. People are seeking spiritual salvation through religions. Religions must not do anything that would hinder people’s progress toward salvation—or toward the Joyous Life in our terminology. Religions are to save people and offer prayers for them to be happy. It would be a great tragedy for the human race if religions became antagonistic to one another.”

He then concluded by saying: “The goal of human existence is to build a joyous and bright life in this world through mutual help. If we are to achieve this, it is necessary for religions, which are many, to promote dialogue and contribute to reducing conflict and antagonism and achieving world peace and humankind’s happiness.” In a question-and-answer session that followed, Honbu-in Yokoyama answered questions raised by the audience who asked about such things as relations between faith and medicine. 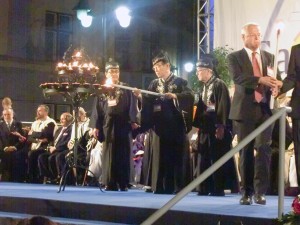 On the evening of the last day, participating religious groups were allocated separate venues to conduct their respective prayers for peace. The Tenrikyo delegation performed the seated service and the first half of the Dance with Hand Movements to the accompaniment of musical instruments.

At the closing ceremony, leaders from all participating religions lit “candles for peace” and signed an Appeal for Peace while praying for the realization of a war-free, peaceful world.