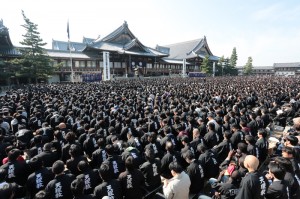 The day was a balmy autumn day in the Home of the Parent with the high surpassing 20°C (68°F). Under clear autumn skies, groups of association members bearing their chapter flags began assembling in the Inner Courtyard an hour and a half before the start of the convention. It did not take long before the 4,560 benches set up for the occasion were filled.

At 10:00 a.m., the Shinbashira, who is also the president of the association, Women’s Association President Harue Nakayama, and other distinguished guests entered the Inner Courtyard to the accompaniment of music provided by Tenri High School Brass Band. The convention commenced with a moment of worship. After the hoisting of the association flag and the opening declaration, all participants sang the Eight Verses of the Yorozuyo. Then, Association Headquarters Vice Chairman Masanori Shimamura read a progress report detailing activities the association had held since the previous convention.

When the Shinbashira took the podium to deliver his address, he mentioned that Instruction Three, which he had announced in his sermon at the Autumn Grand Service the previous day, was not meant to be simply read and memorized. He encouraged association members to make the anniversary more meaningful among themselves by conducting activities that increasingly fulfill the association guidelines, “Develop faith and spread the teachings in single-heartedness with God.”

He went on to say that sprinkling the fragrance and engaging in salvation work amounted to making repayment for God’s blessings. He then spoke of the importance of all Yoboku being aware of their mission to sow seeds of the Joyous Life in their respective communities.

After citing from the Ofudesaki and the Osashizu, the Shinbashira then declared that Yoboku are entrusted with the mission to save people throughout the world who have lost their spiritual guide and are anxious of the future. He pointed out that it was the mission and the source of joy for association members as Arakitoryo, pioneers of the path, to further expand the path they have inherited from their predecessors.

In closing, the Shinbashira said, “We have just begun our journey in this season leading up to the 130th Anniversary, determined to make a special effort to attain a level of spiritual growth that brings joy to the everliving Oyasama.” Stressing that the season of Oyasama’s anniversaries is a “seasonable time for salvation and spiritual growth,” he urged association members to take advantage of the season by settling the mind in single-heartedness with God, setting out on the path of spiritual growth to respond to Oyasama’s parental love, and promoting association activities in unity of mind with the enthusiasm and passion that befits their role as pioneers of the path.

Following the president’s address, Sakai Chapter Chairman Keijiro Nagashima made a pledge on behalf of all association members, saying: “[A]ll of us association members will continually ponder over single-heartedness with God in our daily lives and maintain our awareness of being pioneers of the path, who are to play leading roles, and our conviction that there is nothing to worry about as long as we rely on Oyasama. I pledge on behalf of all association members that we are determined to strive for world salvation so that Oyasama can see our further spiritual growth as we move toward the 130th Anniversary.”

To bring the convention to a close, all the members recited the “Guiding Principles of Arakitoryo” and joined together in singing the “Tenrikyo Young Men’s Association Song.” 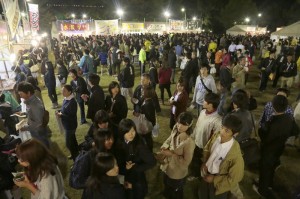 On the eve of the convention, many association members gathered for the “Convention-Eve Festivities” held after the evening service of October 26 on both sides of the South Gate. There were 62 booths offering a variety of regional foods at the festivity sites run by diocese and church chapters.

Stages were set up at the two sites, which provided performances by the Tenri Kyoko Gakuen High School Marching Band, dance troupes, street performers, and other entertainers.

The Shinbashira made rounds of the festivity sites, interacting with association members and offering his encouragement to staff overseeing the festivities.