This year marked the 80th year Tenrikyo Nioigake Day was observed. It was held between September 28 and 30 with the slogan, “Gratitude, moderation, mutual help—Let us convey the teachings to the world.” Nioigake Day first began as “Roadside Speech Day” in 1932. Tenrikyo Mission Department designates September as the month to emphasize and promote nioigake, or sprinkling the fragrance of the teachings. The three-day period between September 28 and 30 is further set aside for Yoboku to actively engage in missionary work and the 28th is also the day for church head ministers to give roadside speeches. This year, over 5 million copies of a pamphlet entitled “Practicing moderation will change the world” were issued.

Church head ministers led the way as followers engaged in door-to-door missionary work and spread God’s name. The Shinbashira observed followers giving roadside speeches in the four districts of Tenri, Shiki, Kashihara, and Sakurai within Nara Prefecture on the 28th.

Followers in Shinjuku District independently designated the full three days of Nioigake Day activities for making roadside speeches. They centered their activities at two train stations, where, in addition to making these roadside speeches, they spread the name of God and handed out pamphlets. One of these stations was Shinjuku Station, where 3 million commuters and tourists pass through each day to utilize the five railways that serve the station. 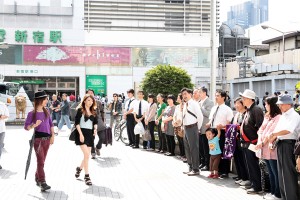 At 9:30 a.m. on the 30th, 20 people including a number of church head ministers gathered in the east exit plaza of Shinjuku Station. After singing the Eight Verses of the Yorozuyo, followers and ministers gave roadside speeches testifying to the joy of faith and the splendor of the teachings to passersby.

Rev. Seiichi Ishida, head of the missionary department of the district, says: “Given how very fluid the population is in the big city, keeping track where followers live is a key step toward maintaining the vitality of activities in our district. The hand-delivery of the Tenri Jiho newspaper helps strengthen bonds between followers and increase participation within the congregation.”

When the district held a convention in February, there were many followers who came because of connections made through the hand-delivery campaign. Haruhiko Kusakabe attended his first district convention this year. He said: “I usually do cleanup hinokishin in a nearby park. It is encouraging to know I have fellow followers I can work with nearby. I would like to take the spiritedness I gained through sprinkling the fragrance today and pour its energy into various other activities.”

Rev. Kazumichi Okino, head of Shinjuku District, said: “I keenly feel that bonds between followers are spreading through the hand-delivery campaign. It is my hope that we will deepen these bonds even further and across the generations by actively calling on younger members to participate while advancing local activities.”

In Toyohashi-nishi District, 43 people took part in door-to-door missionary activities on the 28th and 29th. On the 30th, the district held a convention commemorating the 80th anniversary of Nioigake Day. Members of the district made the decision in March to hold a convention this year to cap their nioigake activities.

Toyohashi-nishi District has held a monthly Nioigake Day for the last 12 years. The activity averages 10 participants each month. Rev. Takeshi Yoshioka, head of the missionary department of the district, says that there has been an increase in the number of Yoboku who sprinkle the fragrance on days other than the monthly Nioigake Day. 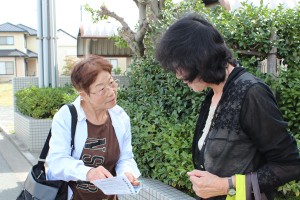 At 9:00 a.m. on the 29th, 27 followers gathered at Hoshi Branch Church to participate in a “Nioigake Drill Study Session” before going out to engage in door-to-door missionary work. After a warm-up, each participant presented their thoughts on waking up that morning and the prospect of going out to sprinkle the fragrance. They then held a discussion on practicing moderation before splitting up into pairs to engage in door-to-door missionary work.

The high temperature that day in Toyohashi City reached 26ºC (78.8ºF). Followers could be seen cheerfully pressing the intercoms of homes in the neighborhood. After an hour an a half of missionary work, followers came back to Hoshi Branch Church with refreshed looks on their faces. One follower had administered the Sazuke to a woman with pain in her leg.

The Nioigake Day Convention in Toyohashi-nishi District was held on Aishokoku Branch Church on the 30th. A practice service was conducted with 133 people attending.

Hiroko Nakabayashi, who is in the middle of attending the Besseki lectures, brought two non-followers with her to the convention. She said: “They said that they felt solace putting their hands together in prayer and expressed their wish to come to worship again. I would like to continue making these efforts, however small they may seem, to help as many people as possible to know about the splendor of the path.”

Head Minister Hiromichi Kawai of Aishokoku Branch Church, who is also head of Toyohashi-nishi District, said: “Although we were worried about the effects of Typhoon Jelawat, they turned out to be minimal. Participants were able to conduct the service in unity of mind. It is my hope that this convention provides a spark for more dynamic missionary activities and the deepening of bonds between Yoboku in our district as we begin heading toward the 130th Anniversary of Oyasama.”

Partially related to Nioigake Day was an overseas study tour presentation held at the Tenri Kyoko Gakuen High School auditorium on September 24. The study tour first began in 1991 to have students experience engaging in missionary work in a different culture. This year, a total of 17 students utilized their summer vacation to go on a study tour to either France and the U.K., Mexico, South Korea, Taiwan, or the U.S.

The study tour presentation gave students an opportunity to exchange photos and videos while speaking of their experiences on their study tours.

This year marked the first time a study tour was held in Europe. Four students spent 16 days in France and the U.K. The study tour group departed on August 5 and first visited France. After attending the monthly service of Europe Centre, they participated in various activities including picking up litter around the nearby train station. The group then went to the U.K. on the 13th. Students engaged in door-to-door missionary work and made roadside speeches in London’s Hyde Park.

Participant Kanami Higuchi said that her desire to do missionary work overseas became stronger through her participation in the study tour. She then stated her wish to pour her efforts into studying foreign languages.