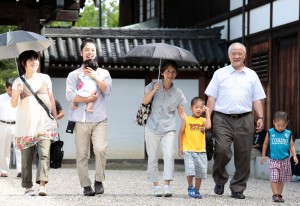 The August Monthly Service of Tenrikyo Church Headquarters was conducted on the 26th, with the Shinbashira presiding as chief officiant.

Shortly before 9:00 a.m., the Shinbashira left the Staff Quarters to proceed to the Main Sanctuary. On his way, he paid his respects at the Foundress’ Sanctuary and the Memorial Hall accompanied by other Service performers while gagaku music played.

In the Service prayer, the Shinbashira pledged on behalf of all followers, “We will devote our sincerity toward saving others and exert efforts to spread the truth of origin to every corner of the earth so that the construction of the world is not delayed.” He also prayed, “May the free and unlimited workings You provide us sweep away the evils of the world, heighten the sincerity in people’s minds, and allow us to make powerful strides toward the Joyous Life.”

The Home of the Parent was in the midst of a heat wave. The high temperature for the day was 34°C (93.2°F). Worshipers could be seen crowding around under the shade of trees and buildings to avoid the direct sunlight. Soft clouds hung overhead and the sun’s rays were tempered by a light breeze as worshipers sang the songs for the Service.

Rev. Maegawa mentioned that even though the second summer since last year’s earthquake in northeastern Japan was almost over, many people in affected areas are still living in straitened circumstances and that disaster relief hinokishin efforts are still being done on the diocese and church levels. He proposed the following questions: “Are there not many people who want to help or lend some form of support but cannot go to the affected areas? Isn’t there something they can do for those affected by the disaster?”

He went on to say that our present circumstances were built by the repeated efforts our predecessors made over the generations to express their indebtedness for God’s blessings. Then, citing from the Scriptures, The Doctrine of Tenrikyo, and Anecdotes of Oyasama, he spoke on the topic of “contribution and dedication.”

Rev. Maegawa explained that contribution and dedication did not merely mean making donations and going to church. Contribution and dedication amounted to “the sincere devotion and actions arising out of our desire for God the Parent to utilize us for the task of single-hearted salvation and to help save others even just a little bit as an expression of our indebtedness for God’s blessings after having settled the truth a thing lent, a thing borrowed in the mind and feeling grateful for being kept alive day after day.” He then spoke about a certain woman’s efforts toward contribution and dedication over many years and how her faith has been passed down to her grandchild and grandchild’s spouse.

After citing a verse from the Ofudesaki—“This universe is the body of God. Ponder this in all matters” (III:40 & 135)—Rev. Maegawa went on to say that we are kept alive in the bosom of God the Parent and in the embrace of heaven and earth. The natural phenomena of severe rain and great winds that occasionally appear, while a form of God’s strict instruction, are also God the Parent’s gifts. He then stressed that now was the time to renew the mind of gratitude, moderation, and mutual help.

As the lives of people affected by last year’s disaster remain grueling, Rev. Maegawa proposed that—in addition to making daily requests to God the Parent and Oyasama to have them recover as soon as possible—the followers daily implement the mind of gratitude, moderation, and mutual help so God the Parent may accept our minds and work in response. He closed his sermon saying, “Let us make powerful strides on this Model path that Oyasama went through and that is the basis for our salvation for now and forever.”