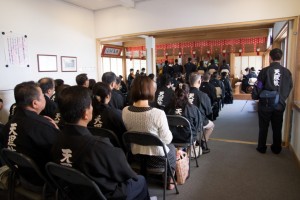 On August 19, Tenrikyo Mission Center in Singapore held the service commemorating its 40th anniversary in the presence of the Shinbashira Zenji Nakayama and his wife, Harue Nakayama. A total of 230 Yoboku and other followers from Singapore and nearby Malaysia attended.

Located on the equator in Southeast Asia, Singapore is a city-state that has seen rapid economic growth in recent years as a commercial hub connecting the world to other countries throughout Asia. The country is home to a diverse mix of ethnicities, including Chinese, Indian, and Malay. Regulations on religious activities are relatively strict, and missionary activities in public spaces such as spreading the name of God, roadside speeches, and door-to-door missionary work are banned.

In this sense, the Cultural Section of Tenrikyo Missionary Center in Singapore, founded in 1976, serves as an important place of contact between Tenrikyo and Singaporean society. The Cultural Section offers classes in Japanese language, karaoke, and cooking. These cultural activities help to build trust and steadily sprinkle the fragrance of the path in the community.

In preparation for the 40th anniversary, there was an effort to nurture human resources, particularly the youth of the community. The Mission Center in Singapore began to offer regular service practices and study sessions on the teachings on the weekends.

On August 19, a little past 8:00 a.m., taxis began arriving one after another in the quiet residential area where the mission center is located. A swirl of different languages such as Chinese and English could be heard as worshipers greeted one another.

Rev. Masaharu Matsuda, head of the center, then read the service prayer in Japanese and English. He prayed that God the Parent would become spirited at seeing the overflowing joy of followers gathered from Singapore and Malaysia. He then went on to state the congregation’s resolve to continue to make steady efforts to bring themselves closer to the Parent’s intention while heading toward the upcoming anniversary of Oyasama.

The Shinbashira then addressed the congregation. After offering his congratulations, he went on to say that the path began from one woman 174 years ago. Oyasama became the Shrine of Tsukihi in accordance with the intention of God the Parent to reveal the final teaching. Oyasama taught that all people in the world are God the Parent’s children and are therefore brothers and sisters. The world of the Joyous Life will be brought into reality when all brothers and sisters come together respecting and helping one another. Furthermore, Oyasama provided Her Model path that shows an example of how to live the Joyous Life. She also remains alive forever, watching over humankind with parental love.

The Shinbashira continued, “The growth of the path bears witness to the way the people saved by Oyasama were guided by the everliving Oyasama as they continued their tireless efforts in the cause of the path of single-hearted salvation by making a point of sprinkling the fragrance of the teachings and saving others.” After indicating that sprinkling the fragrance and engaging in salvation work were “actions that convey the intention of God the Parent to others” as well as actions that “help us make repayment for the blessings we receive,” he went on to say that one should not stop at just informing others of God the Parent’s intention but also devote oneself to guiding others so that they may live in accordance with the teachings and savor the delight of the Joyous Life.

Then, touching upon the unceasing conflict in the world at large, he emphasized, “We need to be convinced that, as long as we trust in Oyasama and continue making an honest and tireless effort to implement Her teachings, humankind can certainly be led to the state of the world envisaged in the teachings through the everliving Oyasama’s workings, although it may take a long time.”

In conclusion, the Shinbashira mentioned that the duty of followers to inform others of the intention of God the Parent and Oyasama as well as the efforts to help others to follow the path is the same irrespective of the language we speak or cultural customs we adhere to. He said: “I want to ask each of you to remember that your presence and work are indispensable to this path. Please give serious thought to the role and position that you have been given and take advantage of the 40th anniversary to make a renewed commitment to continue following the path.”

The Shinbashira then took part in the seated service as the core. This was later followed by the Eight Verses of the Yorozuyo and the Twelve Songs performed by Rev. Matsuda, Yoboku, and other followers of the congregation. The voices of followers singing The Songs for the Service in the worship hall and outside tents resounded in the clear Singaporean sky. 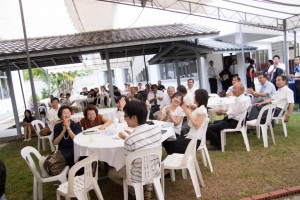 After the service, Rev. Matsuda thanked the Shinbashira and stated the congregation’s resolve to continue walking the path of faith, increase their membership, and nurture one another to bring joy to God the Parent and Oyasama.

After the service ceremonies, there was a commemorative picture taking and a post-service reception. The spontaneous applause that filled the reception area bespoke the congregation’s joy at celebrating their anniversary and welcoming the Shinbashira and Mrs. Harue Nakayama.

The Shinbashira and Mrs. Harue Nakayama visited followers’ homes in Malaysia the next day, the 20th.

The History of the Path in Singapore

The path in Singapore began when Taka Itakura immigrated there in 1916. Her efforts led to the establishment of Singapore Church in 1922, but the church had to be relocated to Japan in the aftermath of World War II.

The post-war missionary effort in Singapore made progress with Tenrikyo Young Men’s Association sending students to study there as one of its activities to commemorate its 50th anniversary in 1968. Tenrikyo Mission Center in Singapore was founded in 1972. The Cultural Section, which began offering cultural activities such as classes in the Japanese language and flower arrangement, was founded in 1976. Singapore at present has four mission stations, three fellowships, and 116 Yoboku.