The Children’s Pilgrimage to Jiba was canceled consecutively in 2020 and 2021 due to the COVID-19 pandemic, but the dedicatory performance was conducted in autumn in both years. This year, the Boys and Girls Association Headquarters decided to hold the dedicatory performance along with the “Fife and Drum Bands on Parade” on five weekends—that is to say, on a total of 10 days—from July 30 through August 28.

On the 30th, the first day, the dedicatory performance was held twice, once in the morning and once in the evening. Participating bands gathered on the east side of the area to the south of the Main Sanctuary. After rehearsing together, the members marched toward the area in front of the South Worship Hall to perform the theme song for the Children’s Pilgrimage to Jiba, “Thank you! Summer in Jiba!” (Arigato, natsu no Ojiba). On July 30 and 31, 51 bands comprising 761 members in total participated.

The route for the “Fife and Drum Bands on Parade,” held for the first time in three years, was from the site of the former South Gate to the area in front of the South Worship Hall.

After waiting for their turn at the designated area, the participating bands went to the starting point one by one in order of performance. When the name of each band and the title of the piece it would perform were announced, its members began to perform earnestly and enthusiastically while demonstrating the fruits of their daily efforts. After all the bands had finished their performances, the results were announced. On July 30 and 31, 30 bands comprising 583 members altogether participated in the parade. 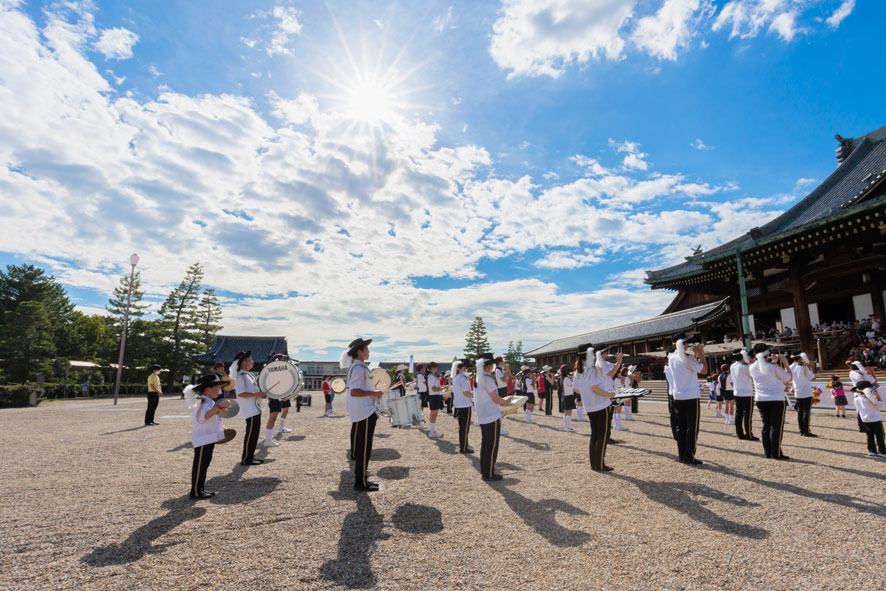