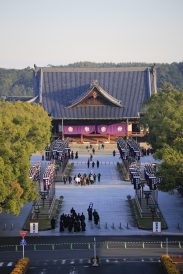 On October 26, the Autumn Grand Service was conducted at Tenrikyo Church Headquarters with Successor-Designate Daisuke Nakayama serving as chief officiant on behalf of the Shinbashira. The Grand Service commemorates the Teaching’s day of origin when God the Parent became openly revealed in the world in 1838 upon the arrival of the Promised Time. Along with the Service performers, a limited number of representatives, including designated heads of churches, attended the Autumn Grand Service.

As a measure to curb the spread of the novel coronavirus, Church Headquarters has been urging Yoboku and other followers to refrain from attending the Monthly and Grand Services. In the meantime, after the state of emergency was lifted, Church Headquarters arranged for all church head ministers to attend the Monthly or Grand Service in the Main Sanctuary at least once by the end of this year.

On that day, the Home of the Parent was blessed with clear autumn skies. Shortly before 8:00 a.m.—the hour at which Oyasama was settled as the Shrine of Tsukihi—Successor-Designate Daisuke Nakayama left the Staff Quarters with other Service performers for the Foundress’ Sanctuary and the Memorial Hall to pay their respects before proceeding to the Main Sanctuary. Rev. Nakayama then ascended the upper dais, where he delivered the Service prayer. The Shinbashira, also, paid his respects to God the Parent at the South Worship Hall together with the performers and worshipers.

In his Service prayer, Rev. Nakayama expressed gratitude to God the Parent—who became openly revealed through Oyasama as the Shrine upon the arrival of the Promised Time—for disclosing the origin of everything and guiding us along this path over a long period of time with unchanging parental love.

He then said: “Receiving the guidance of the everliving Oyasama, who is working now as ever, we are dedicating ourselves to the work of the path with our hearts filled with the joy of following the true path, however imperfect our efforts may be. Today being an auspicious day that marks the Teaching’s day of origin, we Service performers will now bring our minds into unity to perform the Kagura Service and the Dance with Hand Movements, thereby conducting the Autumn Grand Service.”

Continuing, he said: “Assembled before You are the Service performers and designated followers who are representing all other followers. I pray that You, God the Parent, will also become spirited by looking upon the way we become spirited in attending the Service, whereby we express our gratitude for Your boundless daily blessings and pledge to make repayment for the blessings. On this auspicious day, the day of the Autumn Grand Service, as we enhance our awareness of our role as Yoboku who are to embody the intention of the Parent behind the day of origin of the founding of the Teaching, we followers of the path rededicate ourselves to attaining further spiritual growth by pursuing the path in the course of our daily lives and to fulfilling our respective tasks as Yoboku with our minds brought into unity, regardless of any hardships or difficulties we may face.”

The prayer was followed by the joyous performance of the Kagura Service and the Dance with Hand Movements. Following the Service, Director-in-Chief of Religious Affairs Yoichiro Miyamori delivered the sermon.

Rev. Miyamori started his sermon by reflecting upon the way the Tenrikyo community followed the path this year until October, during which the spread of the coronavirus led to the cancellation of almost all of Tenrikyo’s events and activities, which our predecessors had made a point of holding.

He mentioned that as a result we were able to renew our awareness of the preciousness of being able to conduct them in the usual manner. He also pointed out that we might have mistakenly thought that we could fulfill our tasks of the path by merely engaging in such events and activities as usual and, thus, might have been complacent about our efforts.

Rev. Miyamori went on to say that the annual activities such as the Children’s Pilgrimage to Jiba, Tenrikyo Hinokishin Day, and Tenrikyo Nioigake Day were all begun out of our predecessors’ desire and irresistible enthusiasm to do whatever they could for the path and that a great deal of careful thinking had gone into those events. He then noted, “I feel that the COVID-19 pandemic is telling each one of us to set out on the next stage of our journey and think about ʻwhat we can do now,’ rather than getting caught up in ʻwhat we have to do’ and ʻhow we ought to be.’” Rev. Miyamori went on to speak about the importance of spontaneously and proactively pondering over what we could do now with a real commitment to following Oyasama’s Divine Model.

Rev. Miyamori continued by referring to the fact that the coronavirus situation became increasingly serious to the point where Church Headquarters had to close the Main Sanctuary, the Foundress’ Sanctuary, and the Memorial Hall except during the morning and evening services over Japan’s Golden Week holiday season (April 29 to May 6) as a measure to discourage people from traveling long distances. 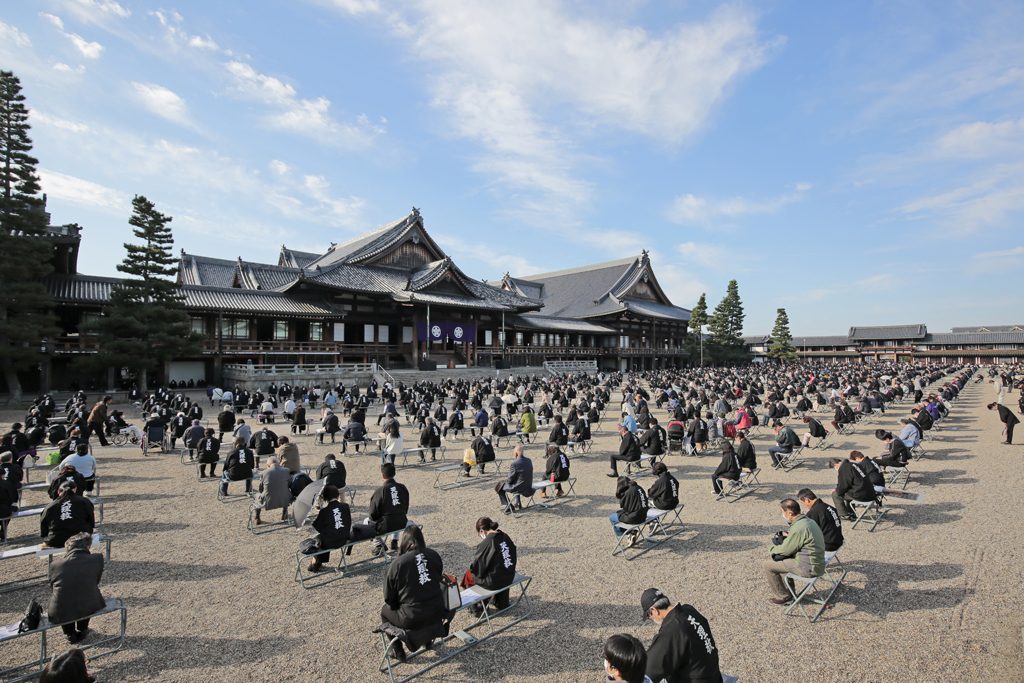 He then touched upon the historical fact that, from around 1882 till around 1884 when Tenrikyo was under the strict surveillance of the authorities, the early followers posted signs at the entrances to the Residence saying, “Worshipers are refused entry,” according to notes written by the first Shinbashira, Shinnosuke Nakayama. Rev. Miyamori then explained that despite the severe circumstances, their faith became increasingly strengthened, whereby they strove to push forward with salvation work. “Such attitudes and actions,” he stressed, “were manifestations of our predecessors’ faith.”

Furthermore, he said that even when the Tenrikyo community faced the suppressive measures resulting from the Home Ministry’s directive of 1896, a number of churches, mission centers, and mission stations were established.

Rev. Miyamori then mentioned that, just as we do now, our predecessors must have wondered what might lie ahead on their journeys but that their main question must have been something like “What kinds of marvelous blessings or wondrous guidance will be shown if I administer the Sazuke?” He went on to say, “Even when our predecessors experienced various troubles and physical problems, they put aside their worries about themselves or their families and worked for the salvation of others.” Rev. Miyamori encouraged the listeners to shift their focus from their own concerns and set out to help save others.

Toward the end of his sermon, Rev. Miyamori quoted a Divine Direction that says: “Without delight in your mind, you will not be able to work. Is there anyone who can work without it? Since all of you gathered here are saying, ʻHow delightful!’ spiritedness wells up within you, even if your plan to do this or that does not go as smoothly as you wish. . . . Everything will settle if you bring joy and satisfaction to others in all matters. . . . Because you find delight, you work. Because you work, things get accomplished. But work done out of a sense of obligation or duty will bring about no lasting truth” (Osashizu, October 21, 1900).

Then he explained, “Although, at the beginning, we may be faced with a situation where things do not go as we expect, I believe that taking delight leads to spiritedness welling up in our hearts.” Continuing, he said, “Bringing joy and satisfaction to others is the basis by which things can be settled.”

He concluded his sermon by saying: “We are now facing significant difficulties and challenges due to the pandemic. Particularly because we live in this difficult time, let all of us share ideas and make strenuous efforts to help save others in a way that can match our predecessors’ work while looking forward to the delight that lies ahead.”