The High School Division of the Students Training Course was held in the Home of the Parent from August 9 to 16. Seeking to deepen their faith and friendship with one another through staying together for a week, a total of 1,355 high school students from all parts of Japan took part in the course, which was supported by 639 staff members.

The students were divided into eight dormitories according to their sex, the number of times they had participated in the course, and their school year. At each dormitory, staff members created handmade decorations and warmly greeted each student with a big smile and the words “welcome home.” 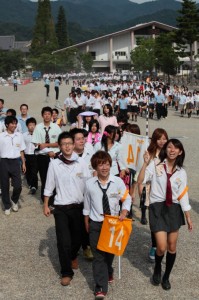 At the opening ceremony, Honbu-in Motoyoshi Tomimatsu gave an opening address, in which he said: “I believe a big goal of this program is for you to feel in your heart a message God the Parent has prepared for each of you. I want you to make this yearʼs course special with your fellow students and staff members by proactively engaging in various activities and taking a close look at your own heart.” After the ceremony, the participants performed a prayer service in the Main Sanctuary while looking forward to what was awaiting them during the program.

Next day, the course went into full swing. The students started each day with the morning service at the Main Sanctuary. They also attended classes led by their homeroom instructors and practiced the dance and musical instruments for the service. 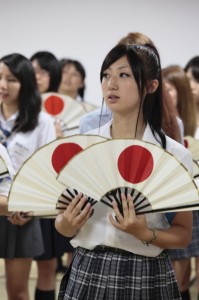 In view of the March 11 earthquake and tsunami, the Students Advisory Committee provided students in the affected areas with bus transportation services and other support, which made it possible for many to return to Jiba. Some of the staff members were from the affected areas and others had engaged in relief efforts as members of Tenrikyo Disaster Relief Hinokishin Corps.

During the period, there were more than a few occasions—including group discussions and lectures—where students and staff members shared with one another their experiences and thoughts concerning the disaster. An instructor whose church was devastated by the tsunami shared his experience with students in one of his lectures on the 11th, exactly five months after the quake struck. “A mother was covering her child, risking her life to protect the child,” he said while explaining what he saw on the streets in the aftermath of the disaster. He went on to say that he had managed to bring his mind into a positive state through seeing great numbers of Tenrikyo followers from all over the country dedicating themselves to relief hinokishin activities. The students listened earnestly to the story he was telling with emotion.

A first-time participant, Sawako Takahashi, shared her disaster experience with her group members during the “Discussion on Faith Experience,” which was conducted on the night of the 12th. She said: “Itʼs been a while since I was last able to cry, laugh, and express my honest feelings as freely as I can here. During this program, I have made precious Tenrikyo friends, performed the services at the Main Sanctuary, and listened to lectures on the teachings. . . . The fog in my heart cleared up before I realized it.” 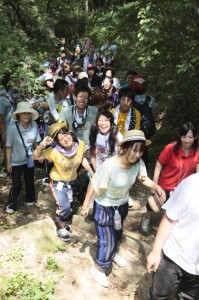 An event called “Path of Early Followers” was organized on the 12th for second-time participants, providing them with an opportunity to walk from Takayasu Grand Church in Osaka Prefecture back to Jiba, crossing the Jusan Pass.

On the 13th, third-time participants went to Nara City to spread the name of God by singing the Eight Verses of the Yorozuyo while walking down streets. Their energetic voices resonated in the city of Nara, which was crowded with tourists who came for an annual event held in the city. 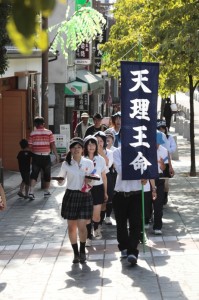 Yoshihiro Nishio, who had enthusiastically sung the Yorozuyo, said: “Encouraged by the presence of my fellow group members, I was able to sing loud. I have done it a few times in my hometown but I had never been more spirited in singing than this time. I think itʼs because this program gave me many opportunities to talk about the faith with my group members and reflect upon myself. I want to continue my step-by-step efforts toward spiritual maturity so that I can become a Yoboku who can sprinkle the fragrance of the teachings on people around me.”

On the 14th, all third-time participants assembled in Dining Hall 2 to perform the service dance, which was the highlight of their participation in the Students Training Course for three consecutive years. At 8:05 a.m., with the sharp sound of the signal block resonating in the dining hall, they started performing while singing the Mikagura-uta with three yearsʼ worth of gratitude in their heart. 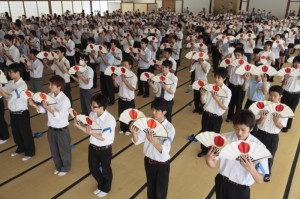 Yuka Yamashita said: “Two years ago, I was shown the huge knot of my motherʼs passing. In the Students Training Course I attended soon after that, I was able to open up to fellow students I had just met. They made me realize, ʻItʼs not just me who is struggling.ʼ Thanks to this program, I find myself willing to take the path seriously. When I was performing the service dance while looking back on the past three years, I felt choked with overflowing gratitude to my mother and family members.” 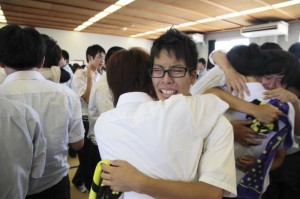 At check-out from their dormitories on the last day, many students and staff members exchanged warm hugs and handshakes with tears in their eyes while expressing words of appreciation to one another.