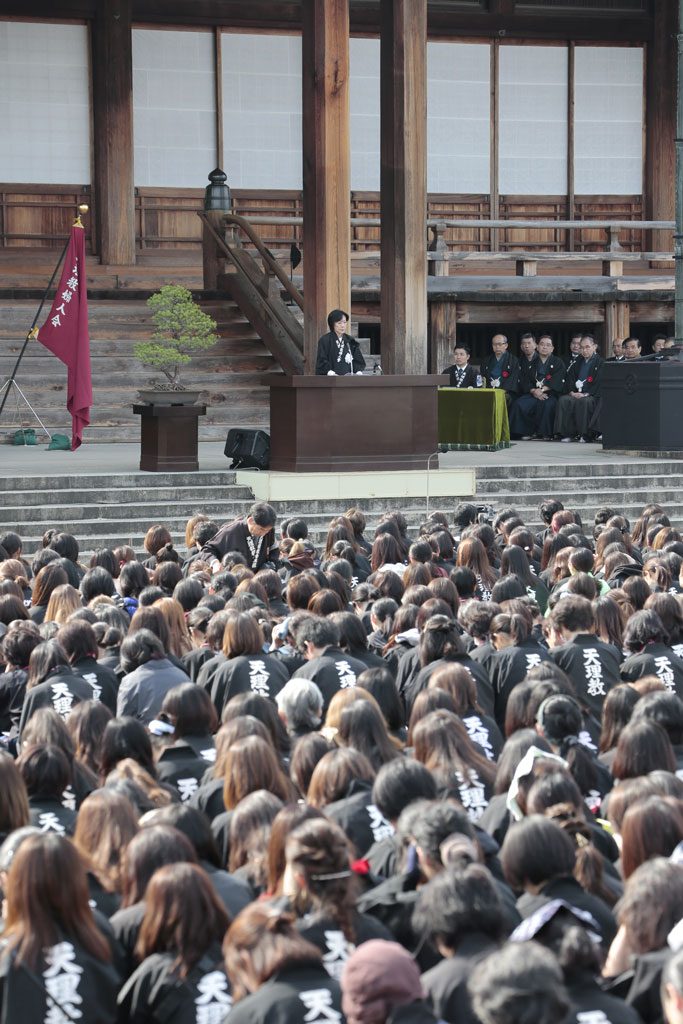 On November 3, the 29th Young Women’s Convention, organized by Tenrikyo Women’s Association Headquarters, was held in the Inner Courtyard of Church Headquarters under the theme “Spread the joy of faith: Let’s invite our friends and return to Jiba!” Over 11,000 young women attended the convention, including many from overseas, for whom the entire proceedings were interpreted into four languages.

This event was designed to provide an opportunity for young women between the ages of 16 and 25 to gather together in the Home of the Parent in order to show God the Parent and Oyasama the progress they had been making through their daily activities. In preparation for the convention, they had been assigned to learn and internalize the basic teachings as well as to seek the Parent’s intention by studying what the Shinbashira and Women’s Association President Harue Nakayama had taught at the previous conventions.

Following the opening remarks made by a representative of young women, President Nakayama took the podium to deliver her address. She began by expressing her appreciation to the congregation for their efforts to prepare for the convention and went on to say: “You may be beginners on the path or followers who have doubts about the path, but if you become convinced of some parts of the teachings of God the Parent, who is God of Origin, God in Truth, please put them into practice in your life. This will surely help you to lead a truly happy life as human beings.”

Explaining that God the Parent teaches us about the use of mind contrary to the Joyous Life through the metaphor of dust, she told the listeners: “If . . . we strive not to accumulate the eight dusts of the mind and not to let others accumulate dusts by respecting and helping one another, the world will be without any dispute or conflict and will become the Joyous Life World so desired by God the Parent. It will still take a long time to realize the Joyous Life World. Yet, I very much hope that we followers of the path will always take the initiative to purify and polish the mind.”

With regard to the purpose of founding the Women’s Association, she pointed out that it is to make progress in spiritual growth by serving as the hands and feet of Oyasama, who continues to work for world salvation, by engaging in salvation work while taking advantage of the virtues and qualities women are endowed with, and by holding discussions together. “You young women of the Tenrikyo faith are members of Tenrikyo Women’s Association. I sincerely hope that you will polish your mind by holding discussions and bringing understanding to one another through various activities that take advantage of your youth,” she said.

President Nakayama closed her address by asking the young members to proactively reach out to those close to them, to make redoubled efforts to increase the number of their fellow association members, and to take part in the 110th anniversary of the association on April 19 next year, inviting as many newcomers as possible.

Next, Director-in-Chief of Administrative Affairs Zensuke Nakata took the lectern. Referring to the fact that the Women’s Association is in the middle of working toward the association’s concrete goal “Toward the 110th anniversary of our association, let us work together to ensure that each member can be blessed with two new members,” he asked the listeners to encourage one another through the activities for young women and join their efforts to achieve that goal. He concluded his remarks by expressing the hope that they, as young Yoboku, would continue following the true path in high spirits. 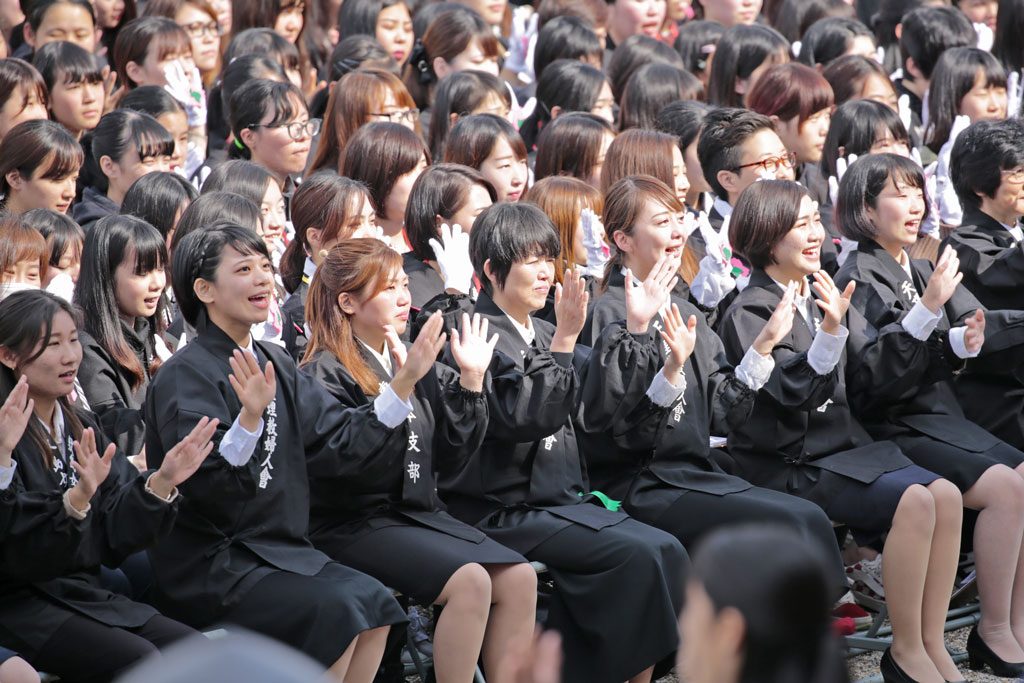 After the proceedings in the Inner Courtyard, they reassembled in the Main Sanctuary, where they performed the service in unison and made a pledge to strive for the 110th anniversary of the Women’s Association. 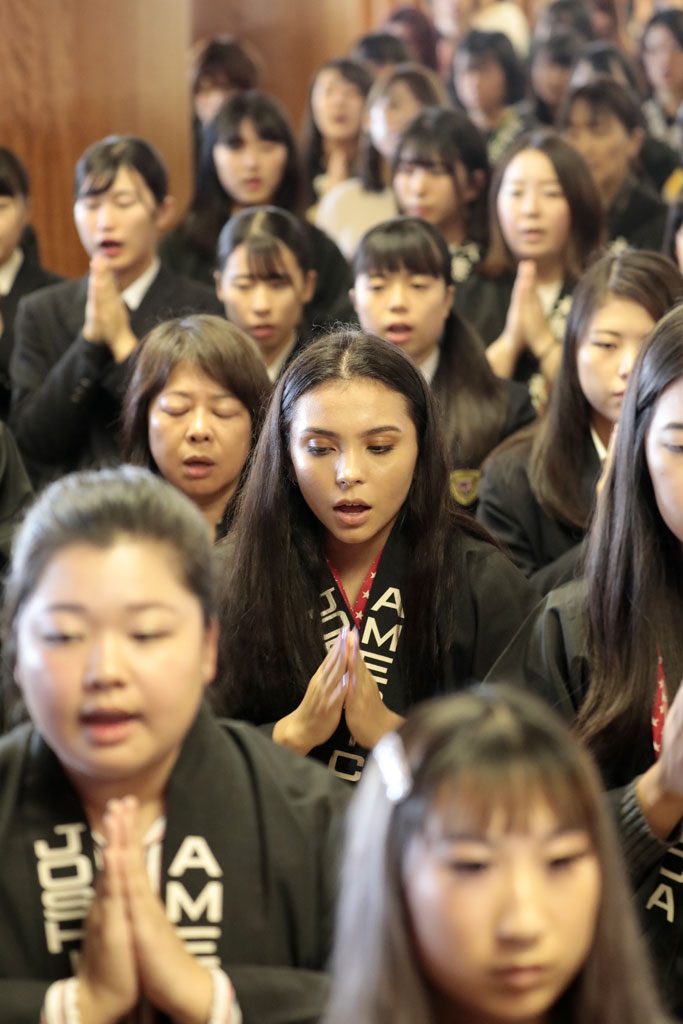 In the afternoon, as a commemorative event, Chapter Meetings were held in which the participants reflected on what they had learned from the addresses delivered by President Nakayama and Director-in-Chief Nakata at the convention so that they could work together to raise one another’s awareness of being association members.

On the previous evening, the Joyous Festival was held on both sides of the area to the south of the Main Sanctuary and at the Tea Service Center, featuring many food and craft booths as well as a variety of entertainment provided on stages.