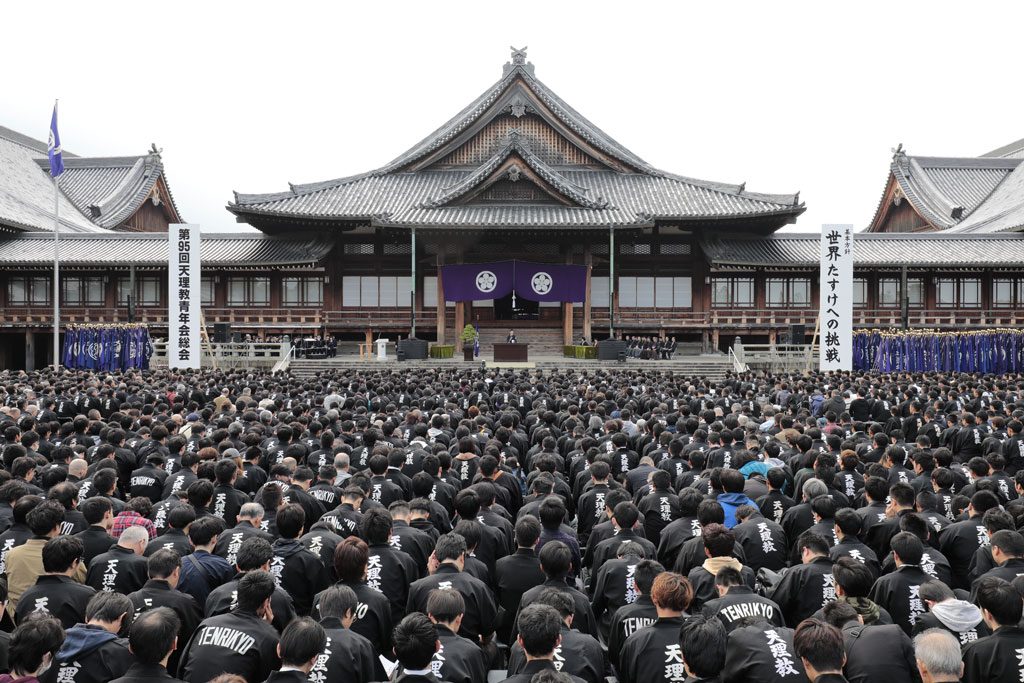 On October 27, the 95th Young Men’s Association Convention was held in the Inner Courtyard of Church Headquarters with roughly 16,000 participants including association members from overseas.

When the registration desks opened at 8:30 a.m., groups of association members began to assemble in the Inner Courtyard one after another, led by their flag-bearers.

At 10:00 a.m., Young Men’s Association President Daisuke Nakayama escorted Harue Nakayama, Nobue Nakayama, and other guests into the venue. A moment of worship was followed by the hoisting of the association flag, the opening declaration, and the singing of the Eight Verses of the Yorozuyo.

Next, President Nakayama took the podium to address the participants. At the outset, he referred to the association guideline, “Take on Challenges for World Salvation,” and explained, “By ‘world salvation,’ we mean to convey the teachings of Oyasama to those who are suffering and thereby save their mind in various contexts such as married life, family relationship, church, workplace, local community, Japan, and overseas countries.”

He then described his vision of the future, “In ten years’ time, Arakitoryo, pioneers of the path, will each be conveying the teachings of Oyasama and helping save the minds of people throughout the world while addressing social problems in their countries and communities.” He encouraged the members to promote association activities while giving thought to what they ought to do right now toward fulfilling this vision. He also urged them to engage in salvation work by taking advantage of their virtues. He pointed out, “The meaning of virtue here includes not only something we like or are good at but also the position or environment we are in as well as the experiences we have had.”

He then described some instances in which salvation work was made possible through people’s virtues. One of the examples was his own experience of helping save a young man he came to know through social media, who had been shutting himself in his room. President Nakayama said that he was able to take advantage of one of his virtues—namely, his bitter, personal experience in the past—and made the person feel better. After mentioning that our virtues may naturally be utilized as long as we engage in salvation work, he stated: “What is important is to take one step ahead toward the kind of world salvation that only you can do. As long as you take one step forward, God will endow you with someone suitable for you to help save and, through that person, God will let you realize something important for you.”

He went on to say, “I believe that the fragrance of the teachings is something that is sprinkled while we are engaging in any kind of salvation work we can do and are interacting with people.” After pointing out that we often tend to lose track of our purpose and that the means can thus often become the purpose, he stated: “[T]he realization of the Joyous Life World is the destination where God is hoping to take us. . . . What is important first of all is to ‘think on our own’ about the kind of salvation work we can do by making full use of our virtues and put it into action.”

President Nakayama then quoted some verses from the Ofudesaki and referred to Oyasama’s fifty-year Divine Model. He said that the first person to walk the path toward world salvation was Oyasama and that She remains everliving now and continues to walk in front of us along the path toward world salvation. He encouraged each and every member to take actions by saying: “Now is the time for all of us Yoboku, instruments of Oyasama, to take on challenges for the kind of salvation work we can do while looking out to the world and toward the future ahead of us. . . . [E]ven though we are not mature yet, we are young men who are endowed with guts and passion. When we are young, we would do well to take on big challenges even if they end in failure. We can give it a try again if our challenge results in failure. By repeating this process, we will be able to become stronger.”

President Nakayama concluded his address by saying, “Let us take one step forward from where we are right now toward world salvation and bring joy to the everliving Oyasama.”

Following the president’s address, Director-in-Chief of Administrative Affairs Zensuke Nakata delivered a congratulatory address. At the outset, Rev. Nakata quoted President Nakayama’s address delivered at last year’s convention commemorating the 100th anniversary of the Young Men’s Association: “Our 100th anniversary is a season for a ‘return to one, a new beginning.’ This day today is not a goal but the beginning of our new endeavor.” Urging all association members to reflect on the past one year, Rev. Nakata said, “I would like to ask you to ponder once again over what you should make of this season as you strive to take advantage of it and take a strong step forward toward the next 100 years by uniting the minds of the association members.”

Rev. Nakata then referred to the three guiding principles for Yoboku that were proposed by the second Shinbashira: “the spirit of single-heartedness with God,” “the attitude of hinokishin,” and “unity of mind.” After explaining the principles, he said, “It is my sincerest hope that you association members will first and foremost make one effort after another to internalize the three guiding principles as Yoboku, while at the same time conducting your association’s activities in high spirits based on the Guiding Principles of Arakitoryo, pioneers of the path.”

Furthermore, Rev. Nakata said, “Human beings are born with a capacity to believe.” He mentioned that most people believe without question that their parents are their true parents, and he went on to say: “A key to following the faith in the path is to believe without question that God the Parent is our true Parent and that the goal of human beings is to realize the Joyous Life. . . . To reconstruct the world as we know it today into the world of the Joyous Life, it is necessary to pay attention to people around us who are going through difficult situations and help them be saved. This is what we need to do as we implement the teachings of Tenrikyo.”

Lastly, Rev. Nakata stressed that Young Men’s Association activities should always be carried out with enthusiasm and with freedom from doubt. He concluded his address by encouraging further efforts of the association members, saying, “It is my hope that each and every one of you will develop your ambition and fulfill your respective roles in high spirits as you move forward toward the Joyous Life.”

To close the convention, the members recited the Guiding Principles of Arakitoryo and then joined together in singing the Tenrikyo Young Men’s Association Song.

The 23rd Committee Launched
At the monthly meeting held on October 27, Tenrikyo Young Men’s Association announced the installation of its 23rd committee as well as personnel changes as the 22nd committee’s term came to an end. Mr. Yuzo Yaoi was appointed as the new association chairman. 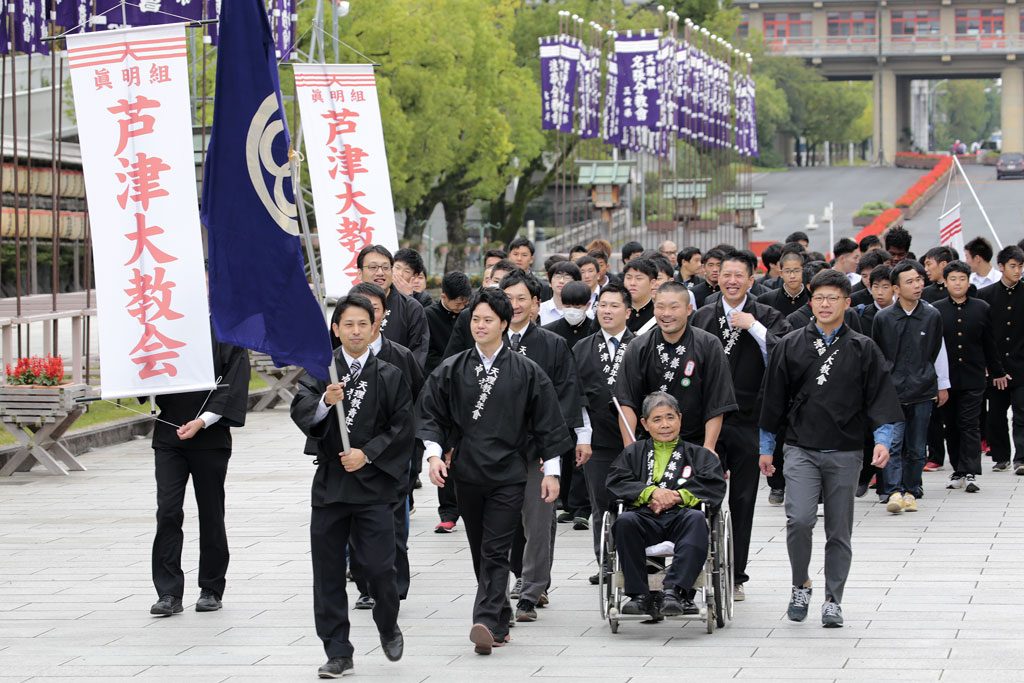