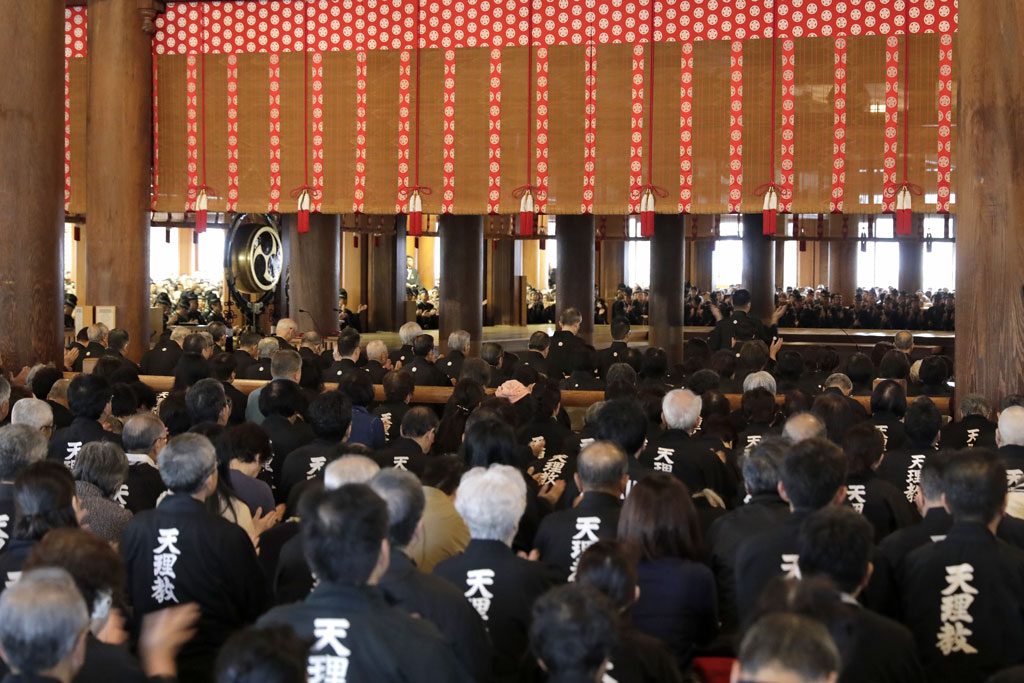 The Autumn Grand Service for the 182nd year of the Teaching was performed in the Main Sanctuary on October 26, commemorating the day of the founding of the Teaching in 1838—the day when Oyasama was settled as the Shrine of Tsukihi through the divine revelation in which God said, “At this time I have descended here to save all humankind.” The Service started at 8:00 a.m.—the hour around which Oyasama was settled as the Shrine of Tsukihi. The Service was attended by approximately 74,000 Yoboku and followers from both within and outside Japan, including those who came from regions that had been affected by Typhoon Hagibis.

Successor-Designate Daisuke Nakayama served as chief officiant on behalf of the Shinbashira. In the Service prayer, he mentioned how God the Parent became openly revealed in the world through Oyasama as the Shrine at the arrival of the appointed time and disclosed the truth of everything in detail. He then expressed gratitude for God the Parent’s warm parental love that has been guiding us along the path leading to the Joyous Life.

He then went on to say: “Though we may fall short, we are committed to making repayment for Your blessings by devoting ourselves to the tasks of the path with spirited minds. This day today marks the auspicious day commemorating the Teaching’s day of origin. We Service performers, therefore, will now conduct the Autumn Grand Service by joyously performing the Kagura Service and the Dance with Hand Movements.” He continued: “On this day today, all of us Service performers as well as church head ministers and other Yoboku will return our thoughts to the Teaching’s day of origin and ponder deeply over Your intention and urgent hastening embodied in natural disasters caused by the typhoon earlier this month in many parts of the country. We are determined to follow the path of the Divine Model and dedicate ourselves to the tasks of single-hearted salvation with the expectation of making further spiritual growth.”

The Kagura Service and the Dance with Hand Movements were then joyously performed. The worshipers, who had filled the four worship halls, the corridors, and other areas in the Sanctuary precincts, joined together in singing the Mikagura-uta, the songs for the Service, with their minds in unison. 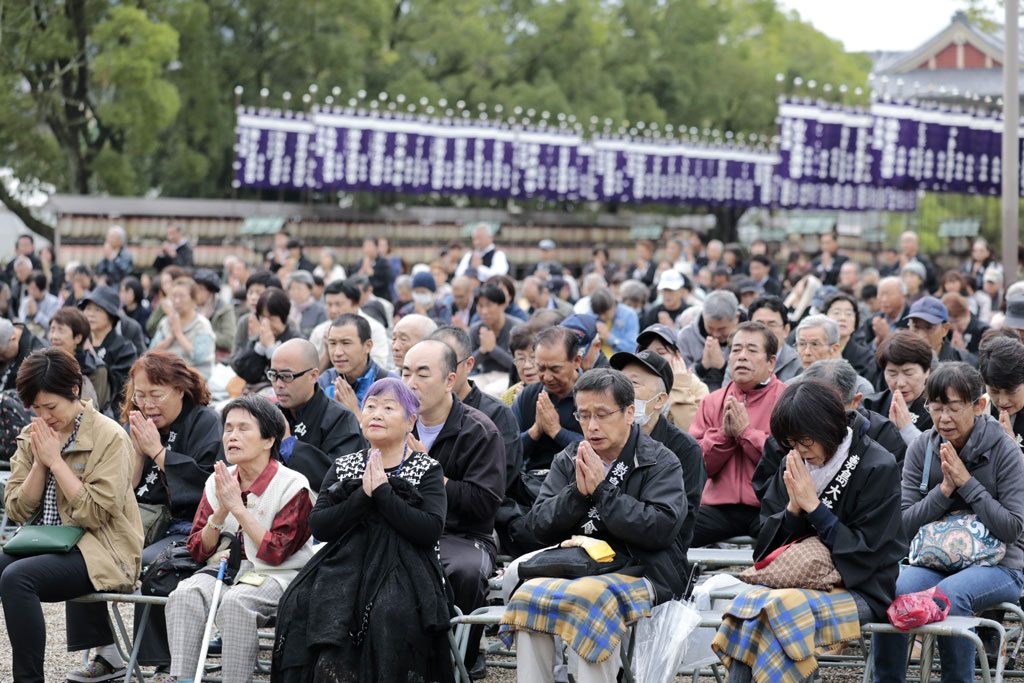 After the Service performance, Director-in-Chief of Religious Affairs Yoichiro Miyamori took the podium to deliver the sermon.

Rev. Miyamori began his sermon by expressing his sincere sympathies to those who were affected by Typhoon Hagibis and prayed for a speedy recovery from the disaster. He also expressed his heartfelt appreciation to those followers who were still sheltering in evacuation centers but made extraordinary efforts to return to Jiba to attend the Service.

He then went on to share his reflections upon the path of the Divine Model—the path of world salvation that Oyasama spent 50 years laying—focusing on three important junctures during the period between 1838 and 1875, namely, the passing of Her husband, Zenbei, in 1853, the construction of the Place for the Service in 1864, and the knot of the Yamamura Palace in 1874—so as to shed light on the spiritual basis for our life of faith. He spoke about how Oyasama strove for world salvation with a bigger picture in mind especially when She was faced with a knot of difficulty as well as how important it is to focus on what we can do rather than worrying about the cause of our sufferings or blaming them on someone else when we are faced with knots.

Moreover, he said, “[E]ach time we are faced with knots of difficulty and go back to square one, we are surely guided by God so that we can step up to the next level in our spiritual growth as long as we continue making efforts to grow spiritually.” He then went on to say, “Oyasama Herself went through a number of knots of great difficulties in high spirits, and She has guided us through any hardships toward the path of universal salvation so that we can grow spiritually along the path that leads to the completion of the Service.” Rev. Miyamori concluded his sermon by saying: “Just as we are told [in a Divine Direction], ‘You need not worry,’ let us rely on God the Parent and trust in the Divine Model of Oyasama as we perform the Service with bright and joyous minds and strive for the salvation of others by making them and ourselves spirited at all times!”

This year approximately 680 people from 25 overseas countries and regions returned to Jiba for the Autumn Grand Service. The prayer and sermon at the Grand Service were simultaneously interpreted into nine languages: English, Chinese (Mandarin), Taiwanese, Korean, Portuguese, Spanish, German, Thai, and Nepali. 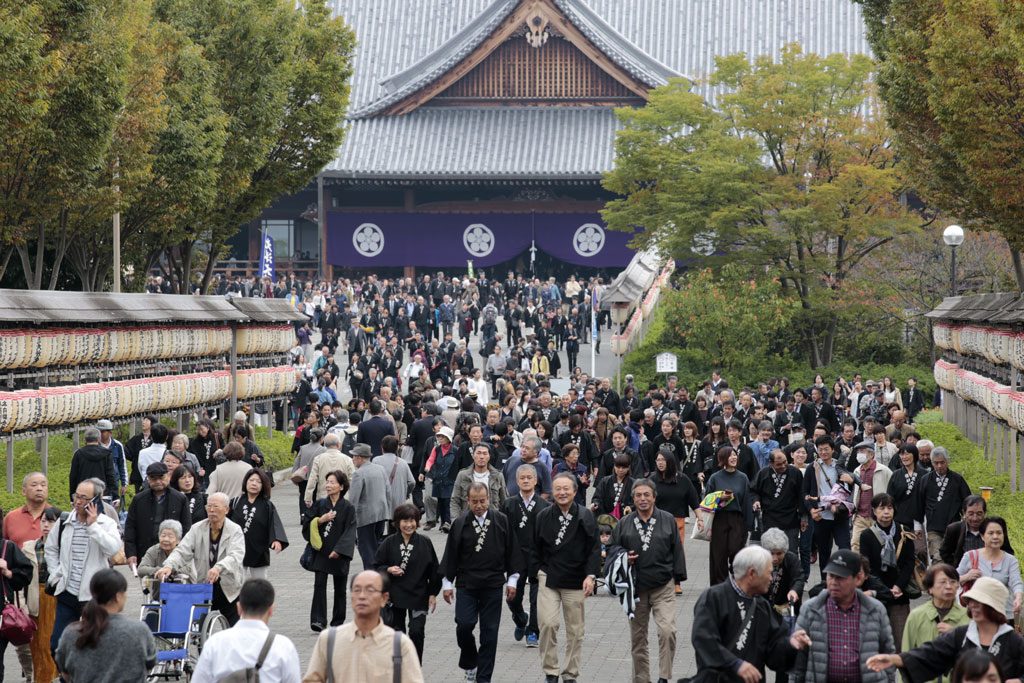