The Fifth Memorial Service for the Third Shinbashira Conducted 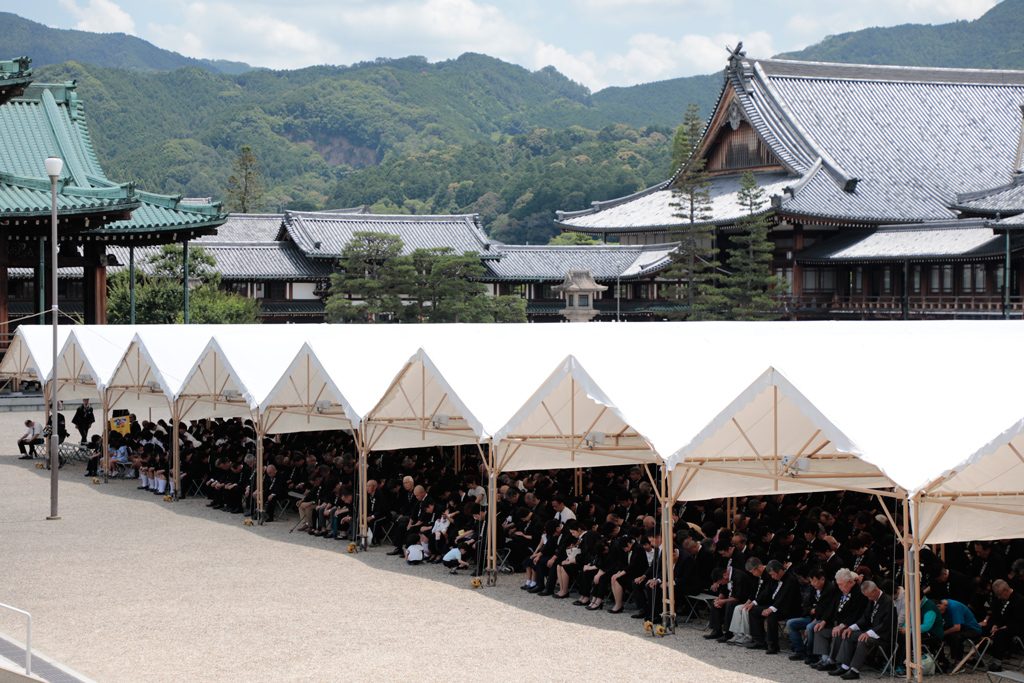 On June 24, the fifth memorial service for the third Shinbashira, Zenye Nakayama—who passed away for rebirth on the same day in 2014 at the age of 81—was duly conducted at Church Headquarters with Successor-Designate Daisuke Nakayama presiding as chief officiant. The service was attended by a great many people including family members, Church Headquarters’ officials, head ministers of directly supervised churches, diocese superintendents, head ministers of branch churches, Yoboku, and other followers.

Shortly before 10:00 a.m., Successor-Designate Nakayama left the Staff Quarters with other service performers for the Foundress’ Sanctuary and the Memorial Hall to pay respects before proceeding to the Main Sanctuary. After he read the service prayer on the upper dais, the Dance with Hand Movements was performed to the Eight Verses of the Yorozuyo and the Twelve Songs.

With the rainy season arriving later than in previous years, the Home of the Parent was blessed with dry, sunny weather that day. In the Inner Courtyard, 40 marquees were set up in front of the Memorial Hall, and the worshipers joined in singing the Songs for the Service in unity of mind.

Thereafter, Successor-Designate Nakayama changed into his kyofuku robe and proceeded to the Memorial Hall for a ceremony. He read a prayer in honor of the third Shinbashira, in which he said: “Serving as the president of the Young Men’s Association from a young age and as the first president of the Boys and Girls Association upon its establishment, you devoted yourself to nurturing young people and children of the path with a sincere heart. After succeeding to the position of the Shinbashira, you worked at the forefront of the Tenrikyo community as the core person of the path for about 30 years, during which you put your heart into developing the path. As for the enhancement of church substance, you made visits to many churches, exerting your full measure of sincerity to help the churches all over the world to flourish. Furthermore, even after retiring from the position of the Shinbashira, you put your mind to serving Oyasama as chief of Oyasama’s Affairs Section, and you also dedicated the rest of your life to caring for and guiding people by delivering the Besseki lectures and visiting regional churches.” Having honored the third Shinbashira’s virtues and sincerity, Successor-Designate Nakayama concluded the prayer by saying: “I pray that you continue to watch over Yoboku and followers, who have taken your instructions to heart and are striving to perform the tasks called for by each significant season. I also pray that your guidance will enable them to move forward on the path of single-hearted salvation.”

Prayers were then offered by family members as well as by representatives of Church Headquarters’ officials, of church head ministers, and of other followers. The ceremony came to an end with the words of appreciation delivered by Director-in-Chief of Religious Affairs Yoichiro Miyamori.