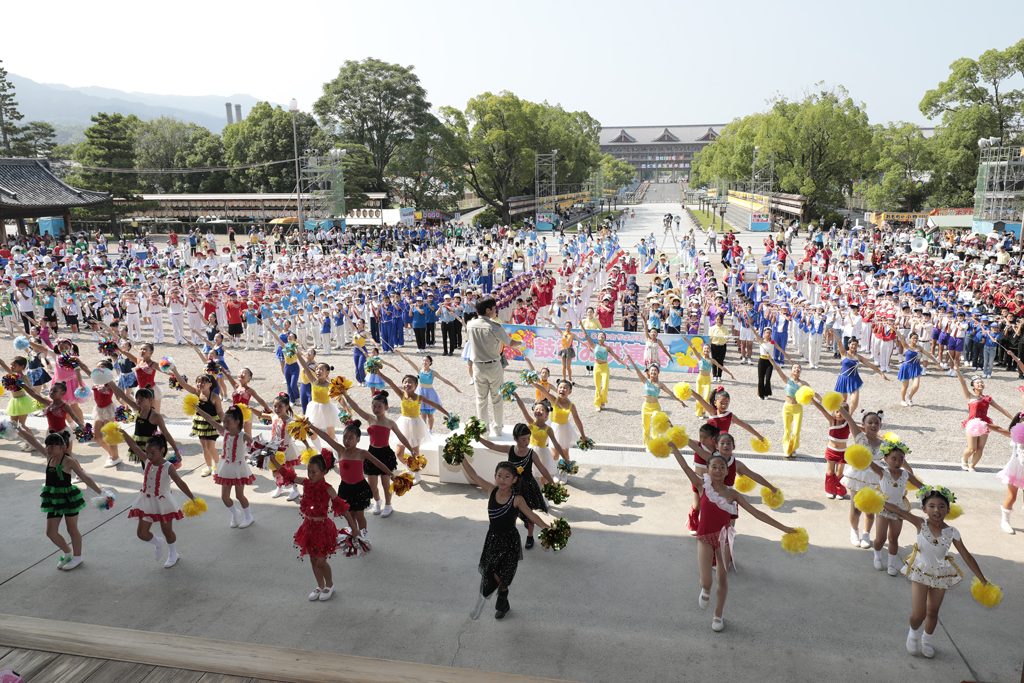 The annual Children’s Pilgrimage to Jiba was held between July 26 and August 4 in the Home of the Parent. This year’s theme was the same as last year: “Gratitude! In joy we are united, to the Home of the Parent!” For this summer festival, which features a nightly parade and many varied attractions and activities, a total of 232,206 children and adult leaders returned to Jiba from all over Japan and overseas. During this period, the children engaged in hinokishin, savored the joy of living, and made lifelong memories in Jiba with other children. The midsummer Home of the Parent was filled with gratitude and beaming smiles.

There had been cooler days before the opening of this year’s Children’s Pilgrimage due to a rainy season that ended later than usual. However, on the 26th, the first day of the event, the temperature rose to 34°C (93.2°F), blessed with clear blue skies. The event kicked off at 1:00 p.m. upon the conclusion of the July Monthly Service at Church Headquarters. On the 27th, the Home of the Parent was struck with heavy rain due to a typhoon arriving in the southern part of Mie Prefecture (which is east of Nara Prefecture, where Tenri City is located). Yet, the weather cleared up by the evening, allowing the Oyasato Parade to be held with a number of splendid floats as well as the performances of orderly marching bands. On July 28, which fell on a Sunday, the turnout was very large. In front of the office for registering pilgrimage groups before participating in the event, the signboard displaying expected attendance levels indicated early in the day that many activities and attractions would be filled to capacity.

In the latter half of this event, the high temperature in the Home of the Parent exceeded 35°C (95°F). As a measure to safeguard participants’ health and prevent heat stroke, first-aid stations with the full support of Ikoi-no-Ie Hospital were set up at 14 locations. More than 500 people—including doctors and nurses from the hospital as well as students from Tenri Health Care University—were deployed at these first-aid stations.

This year marked the 66th year since the Children’s Pilgrimage was launched under the name “Children’s Hinokishin Pilgrimage to Jiba” in 1954. It was the year after an earth-carrying hinokishin event took place for the first time for the construction of the Oyasato-yakata building-complex. The Children’s Hinokishin Pilgrimage was held out of a desire to afford children of the path the opportunity to carry even one basket of earth. Many directly supervised churches and dioceses thus organized pilgrimage groups to Jiba. Since then, earth-carrying hinokishin has been conducted—as one of the original activities of the event—at various locations such as Tenri High School’s grounds, the site for the westward expansion of the Sanctuary precincts, the construction sites of the Oyasato-yakata building-complex, and so forth. This year, just as in every previous year, many children spiritedly engaged in this hinokishin activity despite the sweltering heat. During the 10-day period, there were also other hinokishin opportunities such as the Boys and Girls Hinokishin Corps, whose members, assigned to tea tents scattered throughout the event venues, served ice-cold tea to pilgrimage participants.

July 27 was the first day of activities such as the “Morning Service” event and fife and drum bands’ offertory performances. Tenrikyo’s fife and drum band activities originated from the idea that it would be helpful for children to learn how to work in groups through playing music as a band—an idea that was raised after the first Children’s Hinokishin Pilgrimage. In order to promote fife and drum band activities in the Tenrikyo community, a fife-and-drum-band leaders training session was held for the first time in the Home of the Parent in 1955, when most of the participants were beginners in music. At the Children’s Hinokishin Pilgrimage to Jiba in the same year, a total of 1,478 children in 34 bands participated in their offertory performances. In addition, those bands along with the Tenri High School Band played a role in leading other pilgrimage groups to the earth-carrying hinokishin venue.

On July 28, members of the Overseas Boys and Girls Hinokishin Corps from eight countries and regions such as the U.S.A., Mexico, and Mongolia recited the Association Pledge in their respective languages at the “Morning Service” event.
Among other educational and training activities, the “Oyasato-yakata Lecture” and the “Service Practice Classroom” gave the children an opportunity to learn the teachings and practice the dance and musical instruments for Tenrikyo services. Children could also participate in corridor-cleaning hinokishin in the Sanctuary Corridor, where cheerful voices of children shouting “Ichi, ni, san, shi (One, two, three, four)” could be heard.

Organized for the childrenʼs entertainment were a variety of thrills and adventures such as the “Chopinʼs Miracle Adventures” and the “Ninja Village” as well as a musical production of a childrenʼs story and stage performances including a variety show featuring dance, music, comedy, and magic. Several swimming pools as well as a number of playgrounds equipped with a variety of entertaining gadgets and contraptions were also provided for the childrenʼs enjoyment.

The Children’s Pilgrimage to Jiba came to a close on August 4. In the Oyasato Parade that night, fife and drum bands and bands from Tenrikyo schools were joined by Boys and Girls Hinokishin Corps members, nurses from Ikoi-no-Ie Hospital, high school students and other staff members who had contributed their hinokishin efforts during the Children’s Pilgrimage. The appearance of the marching band of Tenri Kyoko Gakuen High School marked the end of the Oyasato Parade and beginning of the “Finale,” or the closing ceremony, which was held in front of the South Worship Hall.

Two representatives of the Boys and Girls Hinokishin Corps expressed their appreciation for being able to participate to God the Parent and Oyasama. This was followed by everyone singing two songs together including this year’s theme song “Going to Jiba, Place We Love!” The 150 fireworks were set off in the night sky, concluding the 2019 Children’s Pilgrimage to Jiba. 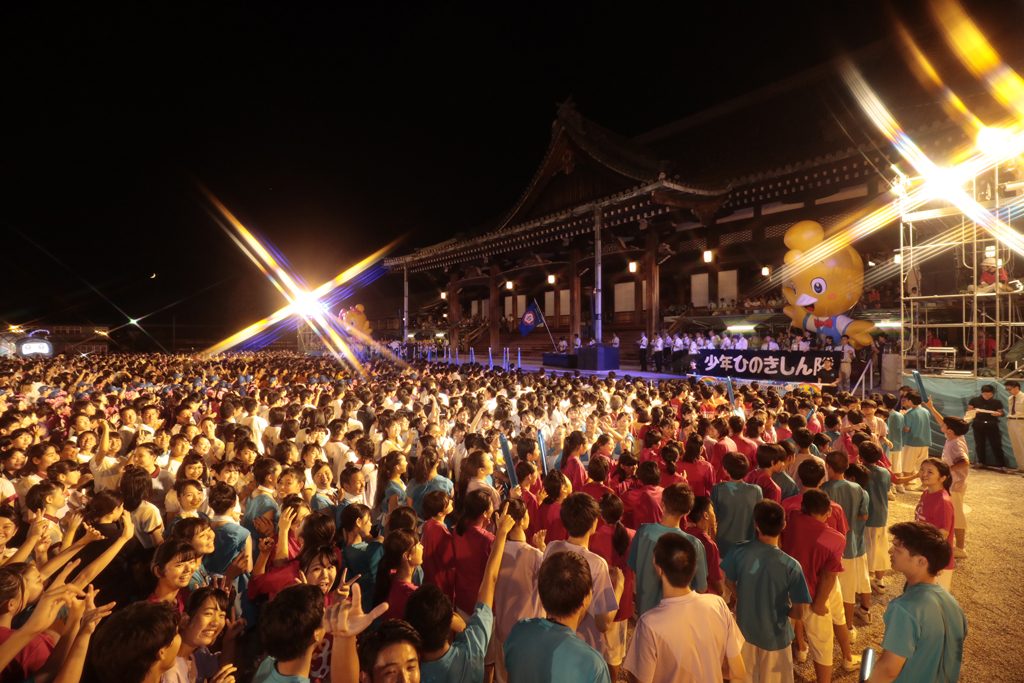