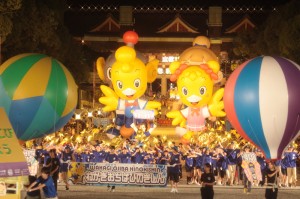 The Children’s Pilgrimage to Jiba began on the afternoon of July 26 after the July Monthly Service. This year’s theme is the same as last year’s: “All people are brothers and sisters. Let’s return to the Home of the Parent.” The event will last 10 days until August 4. Children from across the globe will not only seek to learn about the teachings of the path by taking part in educational and training activities but also deepen their friendships by attending fun-packed attractions as well.

Among the returning pilgrimage groups are those comprising children from areas affected by the March 11 earthquake and tsunami. Followers in affected regions visited evacuation shelters and temporary housing units to encourage children to participate so that they may experience the warm comfort of the Parent.

The Japanese archipelago saw an end to the rainy season a week earlier than average. The high temperature on the first day of the pilgrimage reached 33°C (91.4°F). At 1:00 p.m., activities at each venue were launched simultaneously. Children could be seen playing cheerfully everywhere at various outdoor venues despite the sweltering heat. Tea booths were set up, where members of the Boys and Girls Hinokishin Corps cheerfully offered servings of ice-cold tea to returning followers.

After evening service, fireworks signaled the beginning of the Oyasato Parade. The Tenri High School Band headed the parade, which included glittering floats and fife and drum bands from various regions.

The 27th saw the beginning of the “Morning Service” event, gagaku performances, and fife and drum band contests.

Pledging Gathering on the 25th

On the eve of the opening day of the Children’s Pilgrimage, there was a “Pledging Gathering” held in the East Worship Hall after evening service, which was attended by Church Headquarters staff and hinokishin volunteers.

The Shinbashira said that to bring joy to returning children, it was important for those on the receiving end to have the proper attitude and sense of purpose. He asked those in attendance to fully take into consideration the roles they have been assigned, unite their minds into one, and do their best to bring joy to participating children.

Next, Director-in-Chief of Administrative Affairs Yoshitaro Ueda took the lectern to represent the staff. He mentioned that the number of children returning from areas affected by the March 11 disaster was expected to be twice than average. He then said, “Let us pledge to pour our hearts into our assigned tasks in a unity of mind, with the hope that the children will become more cheerful or at least be comforted and take the experiences they acquired in Jiba as their spiritual sustenance as they grow into capable Yoboku for the construction of the Joyous Life World.”

Those attending then danced the Eight Verses of the Yorozuyo to pray that everything would run smoothly for the duration of the Children’s Pilgrimage.