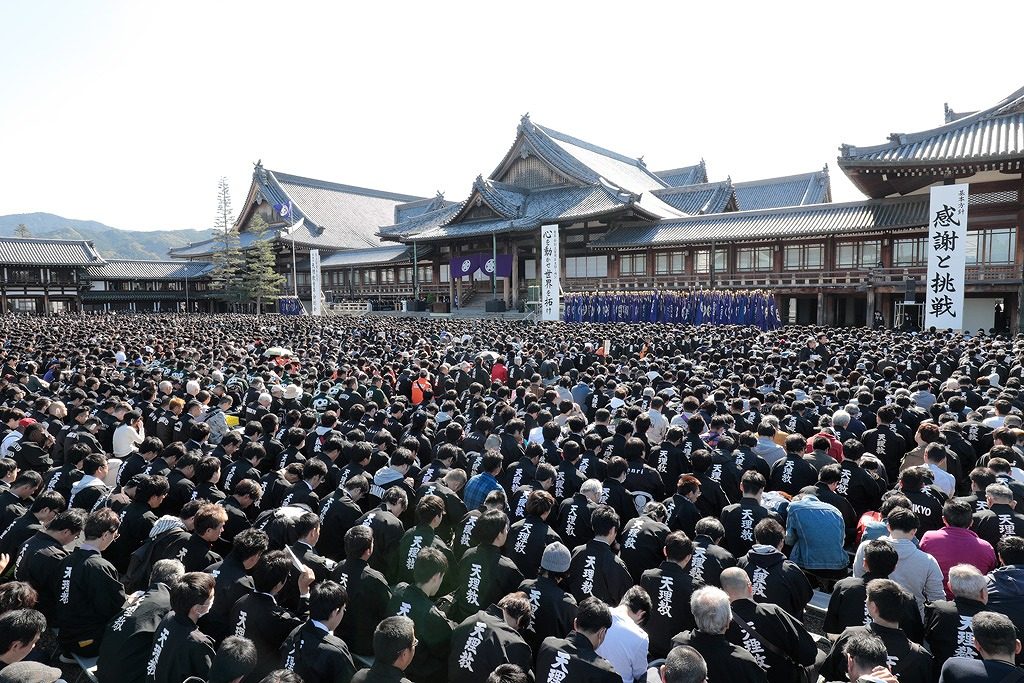 On October 28, the Young Menʼs Association held its 94th annual convention commemorating the 100th anniversary of its establishment in the Inner Courtyard of Church Headquarters, drawing some 30,000 participants including association members from both within the country and from overseas.

On the convention day, the Home of the Parent was blessed with clear autumn skies. When the registration desks opened at 8:30 a.m., groups of association members began to come into the Inner Courtyard one after another. Thousands of folding benches set up in the venue were filled before the convention started. For overseas followers, simultaneous interpretation was provided in seven languages with a total of 308 wireless receivers being lent out.

At 10:00 a.m., Young Men’s Association President Daisuke Nakayama escorted Harue Nakayama, Nobue Nakayama, and other guests into the Inner Courtyard. A moment of worship was followed by the hoisting of the association flag, the opening declaration, and the singing of the Eight Verses of the Yorozuyo.

President Nakayama then took the podium to deliver his address. He first reflected upon his own life-changing anniversary activities while quoting from the Kakisage and the Ofudesaki to illustrate his points. He then said, “The best way to bring joy to God the Parent is to dedicate our sincerity to helping save others—which is to attain the mind of sincerity.”

He explained: “To begin with, . . . let us express our sincere gratitude to God the Parent for enabling us to be alive and direct our attention to our own minds without putting any blame on others, our positions, or circumstances. Let us transform our words and actions so that they flow from the mind of sincerity. By doing so, our mind and our life will change as well. . . . Let us, therefore, always try to follow the path of faith with the mind of sincerity while finding happiness in others’ happiness so that we can implement the Joyous Life in our daily lives.”

He also emphasized: “Our 100th anniversary is a season for a ‘return to one, a new beginning.ʼ This day today is not a goal but the beginning of our new endeavor.” He went on to say that there were three important points in making a new start—namely, “spontaneous effort,” “element of enjoyment,” and “world salvation.”

Regarding “spontaneous effort,” he first pointed out that the driving force in establishing the Young Men’s Association lay in the spontaneous efforts of the young men back then. He then said, “I think that it is very important that now, one hundred years later, we reaffirm the day of origin of our association and carry out our activities by being very conscious of thinking on our own and taking action.”

As for “element of enjoyment,” he mentioned, “[I]t is important to convey the teachings of Oyasama and engage in salvation activities . . . while making the best of what we like to do or what we are good at doing.”

With regard to “world salvation,” he encouraged the listeners by saying: “I am sure that the salvation of those around us will lead to salvation for many others. Let all of us, therefore, continue our work as Arakitoryo, pioneers of the path, to draw closer and closer to world salvation.”

President Nakayama concluded his address by saying: “[L]et each and every one of us association members proactively take actions here and there while making every effort to achieve ever further spiritual growth. Let us savor the joy of being kept alive every day and enjoy our lives while maintaining our mind of sincerity that wishes to help save others and bring satisfaction to others, by making the best of what we are good at doing so that we can reflect the state of the Joyous Life to the world.”

Following the presidentʼs address, Director-in-Chief of Administrative Affairs Zensuke Nakata delivered a congratulatory address. Touching upon the spirit of “restoration” that the Shinbashira referred to at last year’s convention, Rev. Nakata asked the association members to keep it in mind at all times. He explained that part of the reason why the Shinbashira referred to the spirit of “restoration” last year was that the 100th anniversary was taken as a season for a “return to one, a new beginning.”

He also mentioned that we should not overlook the fact that our everyday life itself is thanks to God the Parent’s workings. He went on to say, “Being grateful for the blessings will allow the activities that you carry out as Arakitoryo to gain momentum and eventually bear fruit in the years to come.”

Drawing his talk to a close, Rev. Nakata expressed his expectations for the association members by saying: “I hope that the enthusiasm with which you carry out your activities will call forth more and more actions from other members. God the Parent will then accept your enthusiasm and sincerity in carrying out your activities and provide you with ever more blessings. In this way, I want you to make the world spirited.”

Association Chairman Yoshihito Ando then made a pledge on behalf of all the association members, in which he said: “Without being afraid of making mistakes as we move into the future, we intend to fulfill our duty as Arakitoryo, pioneers of the path, who are to take on the challenges of this uncultivated world. We will all, in a unity of mind, utilize the skills and talents we are endowed with and project the Joyous Life to the world with a sincere mind.”

To close the convention, the members recited the Guiding Principles of Arakitoryo and then joined together in singing the Tenrikyo Young Menʼs Association Song. 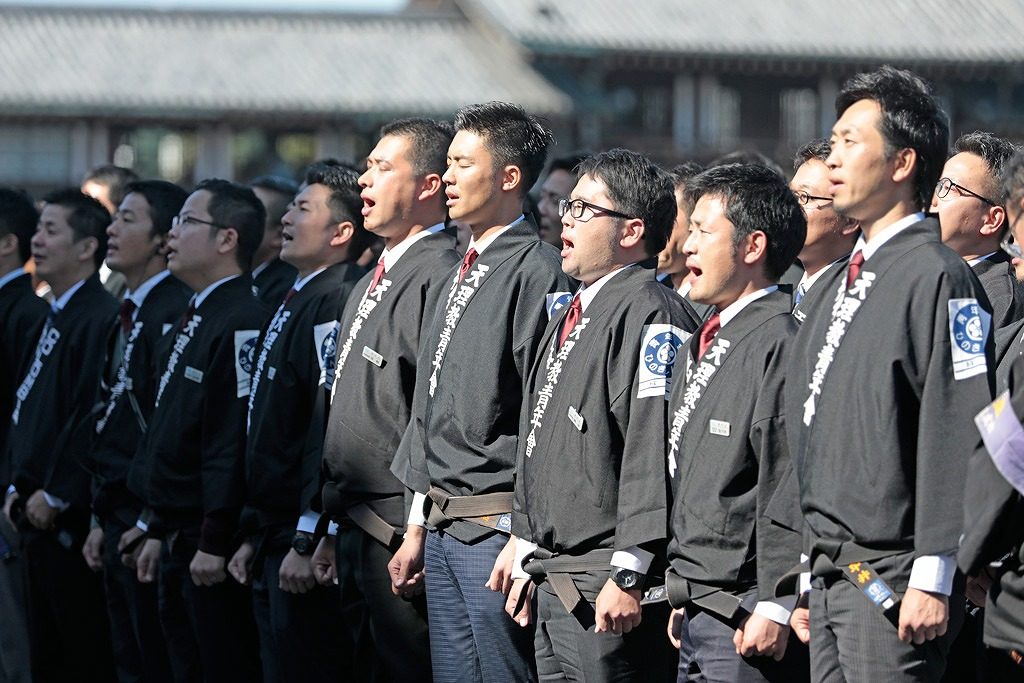 On the eve of the convention, a large number of people including association members gathered for the event “100 Fest.”

In the daytime, a variety of competitions were held in and around the Sanctuary precincts, such as tag rugby, futsal, shogi (Japanese chess), and dance and band contests. Meanwhile, on the east and west sides of the area to the south of the Main Sanctuary, many booths offering a variety of meat dishes were set up, and a number of attractions entertained not only children but also adults.

In the evening, in the open space in front of the Oyasato-yakata’s East Center Wing, a variety of food booths run by diocese and directly supervised church groups, as well as stage performances, were provided.