Tenrikyo Church Headquarters hosted the Children’s Pilgrimage to Jiba between July 26 and August 4 under the new theme “Gratitude! In joy we are united, to the Home of the Parent!” For this annual summer festival, a total of 221,098 children and adult leaders returned to the Home of the Parent from all over Japan and 25 overseas countries and regions, including Australia, Brazil, Canada, Colombia, the Congo, France, Germany, Hawaii, Hong Kong, Italy, Kenya, Laos, Mexico, Mongolia, Nepal, the Netherlands, Paraguay, the Philippines, Singapore, South Korea, Taiwan, Thailand, the U.K., the U.S. mainland, and Vietnam. The children came away with lifelong memories they made through participating in a variety of activities and attractions and staying together with other children in followers dormitories.

The event kicked off at 1:00 p.m. upon the conclusion of the July Monthly Service at Church Headquarters. The high temperature exceeding 35°C (95°F) on most days during the 10-day period, the Boys and Girls Hinokishin Corps members, assigned to tea tents scattered throughout the event venues, served ice-cold tea to pilgrimage participants.

July 27 was the first day of the “Morning Service” event, which marked the start of a day during the Children’s Pilgrimage to Jiba. Participants in the Children’s Pilgrimage filled the North, East, and West Worship Halls shortly before 8:00 a.m. After performing the seated service together, they greeted each other, saying “Good morning” in a loud voice. Then, they recited the Boys and Girls Association Pledge as well as the “three promises” for the Children’s Pilgrimage: (1) Savor the joy of living; (2) Take good care of things; and (3) Help one another. It was followed by the singing of the new theme song “Going to Jiba, Place We Love!”

On July 28, members of the Overseas Boys and Girls Hinokishin Corps from six countries and regions such as the U.S.A., Mexico, and South Korea recited the Association Pledge in their respective languages at the “Morning Service” event.

After the event, many fife and drum bands who had made their way back to Jiba offered their performance together in front of the South Worship Hall by playing in unity of mind the song “Going to Jiba, Place We Love!”

The Home of the Parent was filled with children’s smiles day after day. Among the groups of pilgrims was a group from Brazzaville, the Congo, comprising six Boys and Girls Association members and 10 adult leaders, who spent almost three and a half days just to return to Jiba. This was the first time they had joined the Children’s Pilgrimage after many years of wishing and planning. Yukiko Mpika (age 10), a member of the group, said with a big smile on her face: “I was quite surprised that it is hotter here than in the Congo. It was fun watching powerful, impressive performances in the Oyasato Parade. I would love to come again next time with my friends back in the Congo.”

There were also a number of groups organized by local churches that had been affected by the earthquake that struck the northern part of Osaka Prefecture earlier this year in June.

This year marked the 40th year since the Oyasato Parade was first held in 1979. Every night after the evening service at Church Headquarters, some 100 fireworks were set off in the night sky in the Home of the Parent, kicking off the Oyasato Parade. The spectators were overjoyed at seeing a number of splendid floats as well as orderly marching bands.

Fife and drum bands of local churches and regions had practiced for a long time, looking forward to performing in the Oyasato Parade, in addition to making an offering of their performance to God as well as performing in the “Fife and Drum Bands on Parade” event. Among those bands was the Higashiasahikawa Fife and Drum Band of Awa Grand Church, which had been practicing every week since the band was formed in September last year under the supervision of Head Minister Akio Fujino (age 44). A total of 20 band members returned to Jiba this year. Rev. Fujino commented: “The members really did their best both in practice and in their performance today. Many of them want to come back next summer. I would like to reach out to more children so that I can bring back more children next summer.”

The end of the Oyasato Parade was marked by a spectacular performance by Tenri Kyoko Gakuen High School Marching Band. Children who saw the placards that read “Toward Tomorrow” cherished the good times they had during the day as they went back to their respective followers dormitories.

After the Oyasato Parade on the last day of the pilgrimage, the closing ceremony known as “Finale” took place, where the participants pledged together to come back again next year.

During the Children’s Pilgrimage to Jiba, the Doyusha Publishing Company posted a total of 27 articles about the event along with photos and videos on social media such as Facebook and Instagram. Particularly notable were several videos broadcast live on Facebook and YouTube showing scenes from such sites as “Children’s Alley,” “Tea Service Center,” “Curry Dining Hall,” “Hop, Step, Marching World,” and the Oyasato Parade, enabling viewers to see what was happening during the summer festivities in the Home of the Parent in real time.

Doyusha also posted on Instagram many photos that its staff members took at various sites during the Children’s Pilgrimage, using their smartphones, so as to show their pictures as soon as they could. A total of 57 posts were published during the event, which drew 9,100 likes and 105,000 views. 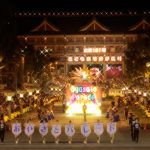 The Oyasato Parade on the opening day (July 26) 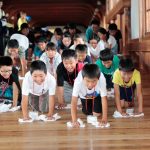 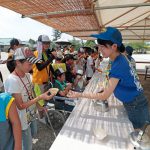 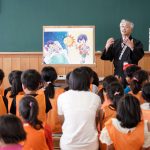