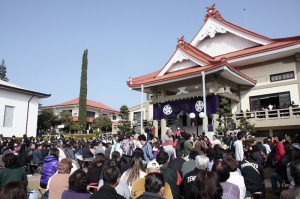 On June 12, Tenrikyo Mission Headquarters in Brazil—located in the city of Bauru—conducted the service to commemorate its 60th anniversary in the presence of the Shinbashira and his wife, Mrs. Harue Nakayama. Approximately 6,150 Yoboku and other followers gathered at the mission headquarters, having come from every part of Brazil as well as neighboring countries including Colombia and Paraguay.

At 9:00 a.m., the Shinbashira and his wife, dressed in their service kimono, entered the sanctuary to the accompaniment of gagaku music. The followers had filled not only the worship hall, which can accommodate about 800 people, but also areas in front of the sanctuary building, other halls on the mission headquarters’ premises, and the multipurpose hall, which was constructed in December 2009 on a plot located south of the sanctuary premises. The congregation members clapped their hands in unison with the Shinbashira, who led them in the worship of God the Parent, Oyasama, and the Mitama-sama.

Bishop Murata then delivered the service prayer, first in Japanese and then in Portuguese. After expressing appreciation for the blessings the mission headquarters had received since its founding, he said: “On this auspicious day, we Yoboku and other followers resolve to maintain faith that is single-hearted with Jiba, follow Oyasama’s Divine Model, bring our minds together in a unity that encompasses both young and old, strengthen our attitude of single-heartedness with God, and thereby take a firm step toward accomplishing world salvation.” He continued: “Now we will set our sights on the next milestone in our journey toward spiritual maturity. I pray that every church in this diocese will be able to serve as a reliable training center for single-hearted salvation and that the path in Brazil will expand further and further in a way that will allow us to attain a higher level of spiritual growth.”

Next, the Shinbashira addressed the congregation. He started off by saying, “The mission headquarters was established in 1951, but Tenrikyo’s missionary work in Brazil had started even before that.” He then reflected upon how the faith of early followers in Brazil has been passed down from parents to children, from older generations to younger generations, and from followers to others as it has gradually spread. “What will make this day truly meaningful,” said the Shinbashira, “is for those of us who are to pass down the faith to the coming generation to make a resolve to accurately follow in the footsteps of our predecessors so as to measure up to the divine intention that ‘the path is for endless generations.’” He then asked the congregation to consider the anniversary day as marking the beginning of a new journey so as to give greater significance to the anniversary service.

The Shinbashira moved on to explain that a mission headquarters has two significant roles. First, he said, it is to serve as the core for weeding and fertilizing that helps followers in a given region to unite their minds and encourage each other—just as a diocese office in Japan does. Second, a mission headquarters has been granted the truth of a church name, so just like any Tenrikyo church it is to serve as a model for the Joyous Life and a training center for single-hearted salvation.

He then explained these two roles in more detail. Concerning the first role, he spoke about how God sought to teach nurturers’ roles by using the metaphor of agriculture. He said: “What you need to consider first and foremost is how you can thoroughly receive the truth of Jiba—which is the source of weeding and fertilizing—and convey it to other people in a way they can fully receive it.” He continued: “The faith of single-heartedness with God can be achieved only when we base our thoughts on the intention of God the Parent and the teachings of Oyasama and thereby put them into practice. I hope you will make efforts to attain the faith of single-heartedness with God while conducting your activities in high spirits. That is the fundamental attitude that I would like a mission headquarters to have as the core for weeding and fertilizing.”

In regard to the second role—a mission headquarters’ role as a church—the Shinbashira said that it should not only serve as a place where people strive to grow spiritually but also help them conduct missionary work. He then said: “The size of the church premises is not what counts the most. What is more important is the atmosphere that emanates from those involved in a church.” He then impressed upon the bishop and other people assembled the importance of striving to settle in mind the intention of God the Parent and the teachings of Oyasama as well as of promoting activities that can serve as the core for the communities in which they live.

Toward the end of his sermon, the Shinbashira paid tribute to those early followers who had contributed to the path in Brazil and other South American countries. He then concluded his sermon by saying: “All of you have been drawn to the path in Brazil due to your causality and thus have been following the path. What this means is that all of you are equally given a role in the cause of the path despite the different positions you may have in the Tenrikyo community as well as in the larger society. Now I would like to ask you to renew your commitment to working together with your fellow followers so as to be blessed with ever growing church communities in your respective regions.”

The service was then performed joyously. The followers brought their minds together in singing the Mikagura-uta, The Songs for the Service. 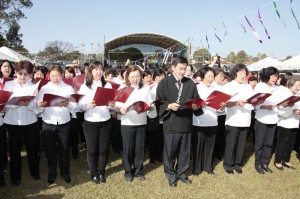 Following the service, the 6,150 followers regrouped at Recanto Tenri (the mission headquarters’ recreation ground) to enjoy a festive event called “Joyous Gathering”—which was organized by the Brazil Chapter of the Boys and Girls Association—in the company of the Shinbashira and his wife as well as distinguished guests including the mayor of Bauru. During the event, a representative of the association members offered words of welcome to the Shinbashira, who then made remarks as the president of the association.