On March 28, this year’s Students’ Spring Pilgrimage to Jiba, cosponsored by the Students Association and the Students Advisory Committee, was held in the Home of the Parent under the slogan “Let us nurture ourselves to become Yoboku who will lead the next generation.” Honored by the presence of the Shinbashira and his wife, as well as Successor-Designate Daisuke Nakayama and his wife, the convention was attended by approximately 4,900 high school- and college-age students from all parts of the country. 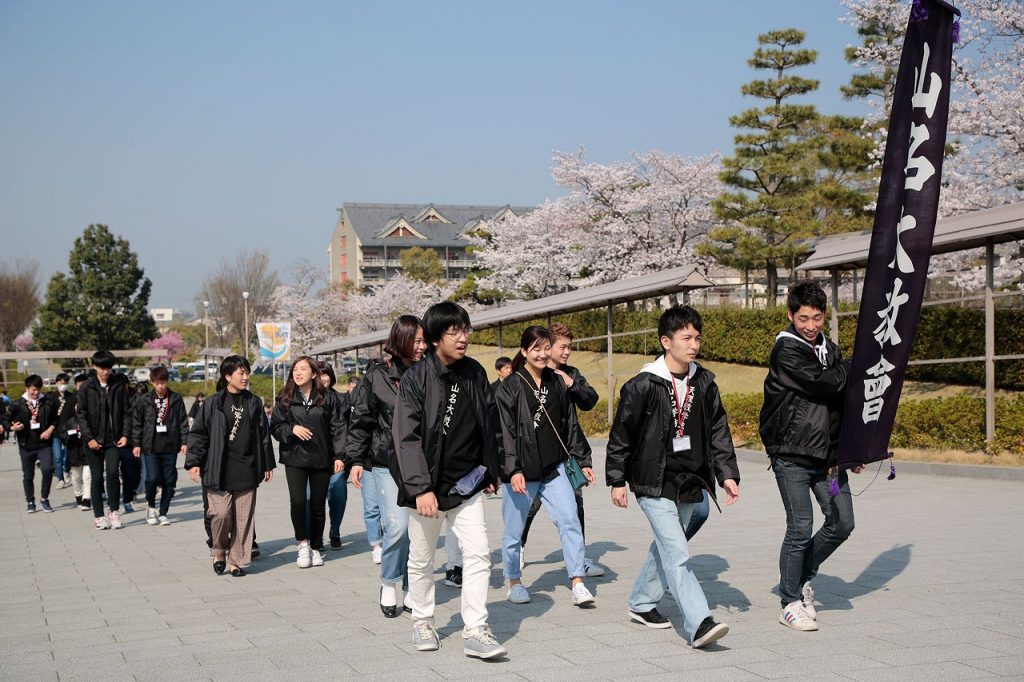 The Shinbashira, who focused his address on the importance of one’s church, began by talking about the Home of the Parent, the place where the Parent of all human beings resides. He said, “Since you have returned to Jiba for this occasion, I hope that you will able to learn more about the intention of God the Parent and settle it in your heart before you go back to your respective places.”

The Shinbashira then stated, “Oyasama has left a path for us human beings to follow so that we can attain the Joyous Life.” He explained that it was through Her interactions with Her family and those around Her that She showed how we should live each day in accord with God the Parent’s intention. He said that as the stories of Oyasama were conveyed to more and more people the path gradually spread. He stated, “This path, which was started by Oyasama alone, has continued down to the present day.” 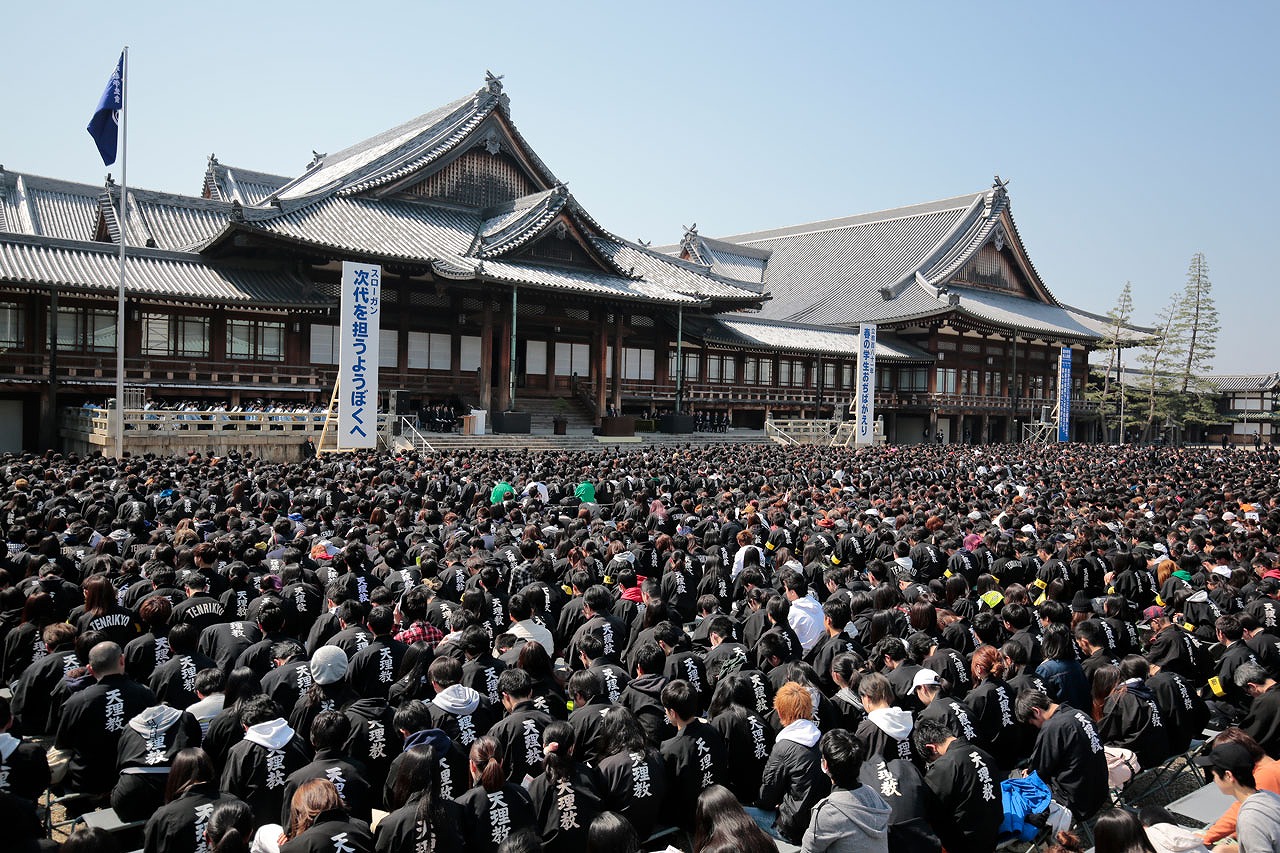 He then mentioned that about 16,000 Tenrikyo churches have been established in Japan and overseas and stated: “Part of the mission of each church is to convey the teachings of Oyasama to as many people as possible and help those who are troubled or are suffering. Another part of each church’s mission is to perform the service while praying for all people’s happiness and for world salvation. It is also each church’s mission to create a joyous atmosphere and to become the source of the Joyous Life in each community.” He stressed, “To spread the teachings of Oyasama is to convey God the Parent’s intention and strive so that the Joyous Life World can be manifested even a day sooner.” He further explained that Oyasama spent 50 years showing by Her own example how to live the Joyous Life, making the Divine Model the only model from which all of us who are following the teachings can learn how to maintain a joyous attitude as we live our lives.

He went on to say: “A church is like a family where each and every person’s faith is nurtured. A church is where the people involved both help one another and fulfill their own responsibilities. To ensure that each church can create an atmosphere and become a center for the Joyous Life in each respective community, each and everyone’s efforts are required.” He further said, “As you visit your churches and see people there, I hope you will greet them and create opportunities to do whatever hinokishin you can do.” While explaining the importance of making efforts to go to our churches and connecting our hearts to God the Parent and Oyasama, he said, “I hope that you feel close to your churches.”

Lastly, he told the students that the period in which they are students is an important time for them to lay the foundation for their future life. He explained that they should develop the proper attitude for learning—an attitude that would also help strengthen their faith—and he stated, “I hope that you will broaden your minds by learning about how you should live your life through your interactions with many people such as your Tenrikyo friends, your school friends, and people from your church.”

After the convention, members of the association participated in activities organized by their respective directly supervised churches to strengthen their bonds. In addition, 410 students, including 109 first-timers, attended the Besseki lectures.

On the previous day, the “Spring Festival” was held featuring 77 food booths run by diocese and directly supervised church groups as well as a variety of entertainment provided on stages. 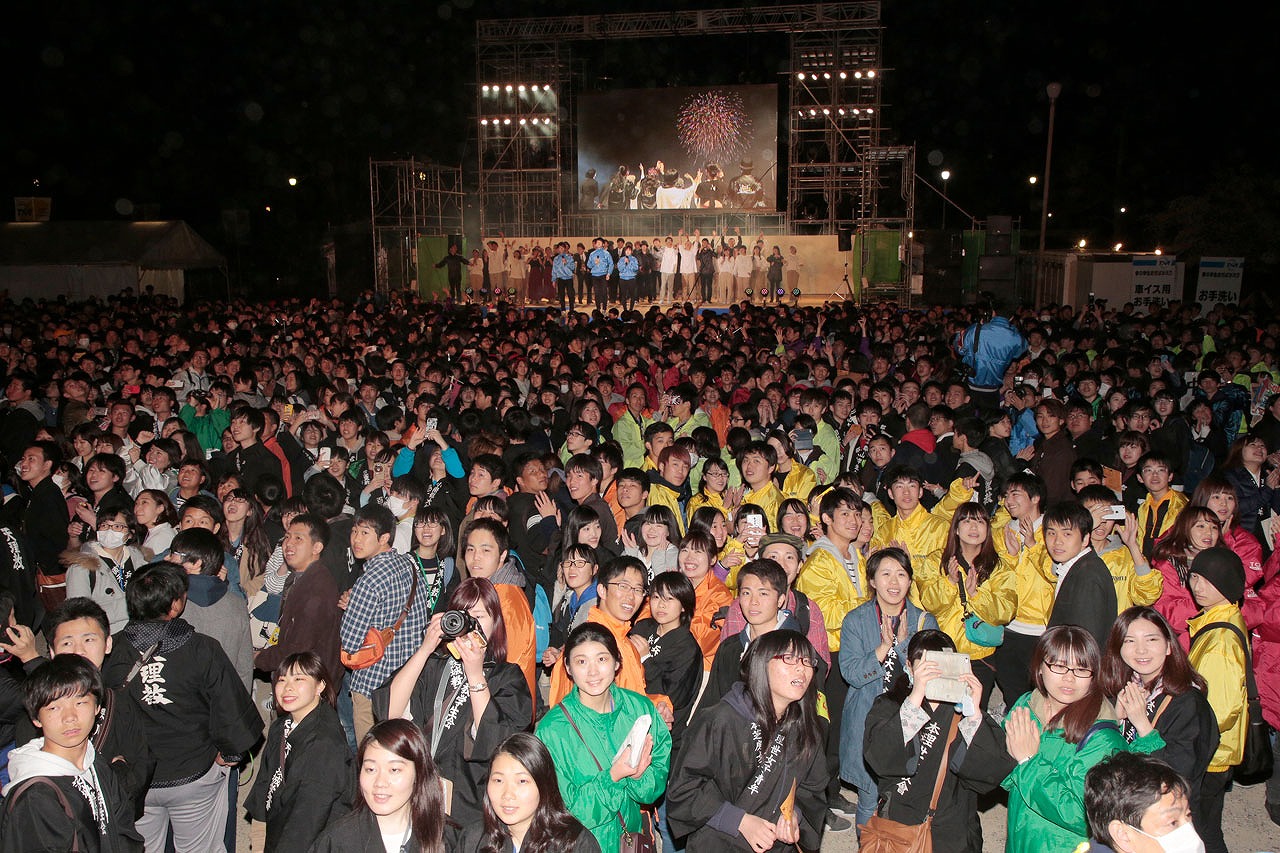