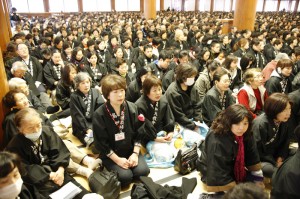 On April 19, Tenrikyo Women’s Association held its 93rd annual convention. Due to the rain that started falling in the morning, the main venue was changed from the Inner Courtyard of the Church Headquarters to the North, East, and West Worship Halls of the Main Sanctuary. Committed to take a new step after passing the milestone of the association’s 100th anniversary last year, more than 57,000 members assembled for the event.

At 8:00 a.m., the start of registration was announced in the Inner Courtyard over the public announcement system. Groups of members, many of which were led by a member bearing their chapter’s burgundy banner, filed into the Inner Courtyard one after another. A while later, when it started to rain hard, many members went into the worship halls to take shelter. Soon, the North, East, and West Worship Halls, Corridors, and areas beneath the Main Sanctuary were filled with people, while some members sat on the benches in the Inner Courtyard while holding umbrellas.

At 9:40 a.m., Women’s Association President Harue Nakayama escorted the Shinbashira, the former Shinbashira, and other guests into the venue, and the members welcomed them with resounding applause. The program began with the singing of the Eight Verses of the Yorozuyo. Tenri High School’s Evening Course Student Sayako Ito then made a pledge on behalf of all new members, which was followed by Committee Member Yukiko Nakabayashi presenting her report on the previous year’s association activities.

President Nakayama then delivered her address. After reflecting on last year’s 100th anniversary convention, she said that the members were shown the huge knot of the earthquake and tsunami in northeastern Japan just when they had taken a new step with the 100th anniversary as a stepping-stone. “In light of the teaching that women represent the truth of earth,” she said, “now is the time when all human beings, particularly women, should give serious thought to the message contained in this knot.”

She went on to say, “Important things to do as followers of the path are to ponder deeply over God the Parent’s intention embodied in this knot, reflect critically on our way of living and being, make changes where necessary, and exert continuous efforts to become people who are acceptable in the eyes of God the Parent.” Quoting from the Scriptures, she stressed the importance of living in full accord with the teachings every day. In regard to the association’s slogan for spiritual maturity, which is “Let’s follow the Divine Model and become the foundation for the Joyous Life,” she said, “Implementing the teachings in our lives is what is meant by ‘following the Divine Model,’ and in doing so, we can naturally fulfill our role as the foundation of the path.”

She then spoke about the proper attitude that we followers of the path ought to maintain in facing the knot, saying, “Let us hold discussions and bring understandings to one another in our efforts to overcome this huge knot, resolve our minds to bring ourselves into complete accord with God’s intention, and always keep in mind the need to respect and help one another in the journey toward recovery.” She concluded her address by urging the members, “In order to become a solid foundation by implementing the association’s activity guidelines, let us resolve to make progress in our spiritual growth, however small each step may be.”

Then the Shinbashira took the podium to deliver his address. Drawing on the beginnings of origin of this world, he told the members, “When we find ourselves at a major juncture, we can only progress to the next stage if we have a readiness to start all over again from scratch.” He went on to say, “Given that the Women’s Association is now past its 100th anniversary and is starting a new journey, you would be well advised, I believe, to return to the beginning and make a fresh start with regard to your association’s activities.”

He then pointed out that the association’s activity guidelines, which are prefaced by the slogan “Let’s keep the original intention in mind and grow spiritually to be true Yoboku,” apply to all Yoboku of the path, and he said, “I think that growing spiritually into true Yoboku entails cultivating and enhancing the mind of saving others, as well as working sincerely day after day to become people who actually implement salvation work.” He urged those who are already Yoboku to proactively administer the Sazuke, try to deepen their understanding of the teachings, and continue seeking the path in order to grow spiritually into becoming true Yoboku.

In the light of women’s roles and strengths, which are bearing and raising, he said: “With regard to raising children of the path, as well, we cannot necessarily say that children will naturally come to embrace faith so long as the parents are properly practicing faith. It is of course true to say that children tend to follow in their parents’ footsteps. However, not only should parents follow the path properly, but they also must not neglect to provide training and teach discipline in a way that is appropriate for the stage of their children’s growth as the occasion arises. In that manner, I hope that you will raise your children so that they will grow into Yoboku who will eventually practice faith proactively and follow the path properly, no matter what situation they find themselves in.”

He concluded his address by making a request: “I would like to ask all of you members of the Women’s Association, who regard yourselves as the foundation of the path, to build on your work as the unshakable foundation to seek and implement the way of serving as women of the path who accord with Oyasama’s intention, as well as to properly nurture and train younger women who will follow in your footsteps. To succeed in that endeavor, I hope you will make repeated efforts to grow spiritually into true Yoboku of substance.”

Next, Muya Chapter Chairwoman Hideyo Tosa delivered a pledge on behalf of all members. Before concluding the convention, all members sang the association anthem.

In the afternoon, members attended gatherings organized by their respective directly supervised chapters. The gatherings were designed to provide an opportunity for discussions based on the addresses by the Shinbashira and the Women’s Association president with the aim of heightening members’ awareness of their roles. Using their respective followers’ dormitories as venues, a variety of activities were conducted, such as small group discussions and speeches by chapter representatives. In response to the huge knot of the earthquake and tsunami disaster, some chapters performed prayer services for the early recovery of the devastated areas while other chapters organized disaster relief donation drives to help support recovery efforts.