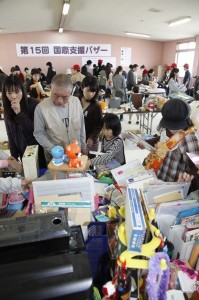 The International Network for Mutual Help, based in the Overseas Department, hosted its 15th annual charity bazaar on April 10, drawing more than 900 people.

The network uses the proceeds from the bazaar for emergency-relief work for natural disasters that take place around the world. In response to the March 11 earthquake and tsunami, the network decided to donate all the proceeds from this year’s bazaar to the Tenrikyo Disaster Relief Fund, which is managed by the Tenrikyo Disaster Relief Headquarters.

The network had appealed for donations of bazaar items through posters and the Internet. On the morning of April 10, a long line of people, estimated to be more than 300, had formed in front of the venue’s gate at the Overseas Department. Many of the bazaar items—which included thousands of household items, clothes, furniture, and household appliances—were gone soon after the venue opened.

A woman from Osaka who learned about the bazaar through the Internet said: “I came to this bazaar because I heard that the proceeds would be used for the postquake relief activities. I am hoping I can do something for the quake victims.”

The proceeds from the bazaar, including donations raised for the relief fund, amounted to some 574,000 yen.