On March 14, the Tenrikyo Disaster Relief Hinokishin Corps sprung into action by delivering relief supplies to Kamaishi City in Iwate Prefecture. From the 17th, Niigata Diocese’s corps began distributing water to areas in Miyagi and Fukushima prefectures where the water supply had been cut off. On the 18th, when the water supply was restored at the hospital in Fukushima City where the corps had been distributing water, the corps members regrouped in Miyagi Prefecture, where they distributed water over an extensive area.

Thereafter, the activities conducted by the corps were generally focused on three regions. One of those regions was Miyagi Prefecture, where the corps members initially distributed water while basing themselves at the Miyagi Diocese Office in Sendai City. Joining in those efforts, which had been started by Niigata Diocese’s corps, were the corps from Tochigi, Miyagi, Nara, and Tokyo dioceses, which distributed water not only to Sendai City but also to devastated coastal areas, including Tagajo City, Ishinomaki City, and Yamamoto Town.

In the meantime, the corps accepted a request from Higashimatsushima City to restore a community center that had been flooded by the tsunami. On April 2, the corps set up its base of operations at the community center. From there, the corps from Aichi, Shiga, Gifu, Yamanashi, Hokkaido, and Kyoto dioceses took action to clear mud from the roads and remove the wreckage and debris of houses that had been destroyed by the tsunami. 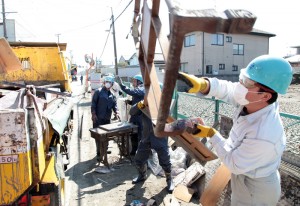 On the 10th, the local elementary school that had been serving as an evacuation center needed to reopen for the new school year, thus making it necessary for evacuees to move to the community center. The corps members, therefore, moved to a Self Defense Force post, where they set up camp on an open lot. While basing themselves there, the members continued to remove mud and wreckage from the area. As of April 12, the total number of corps members who had taken part in those efforts in Miyagi Prefecture stood at 901.

The second region in which the corps focused its efforts was central Iwate Prefecture. The relief activities in this region got an early start thanks to the efforts of Iwate Diocese’s corps, which took the initiative to spring into action while coordinating its activities with the local authorities. On March 16 and 17, Yamagata Diocese’s corps joined them. Setting up its base of operations in Tono City on March 20, the corps helped the Self Defense Force members to serve soup as well as sorted and distributed relief supplies.

From March 25, the corps members embarked on full-scale recovery operations. Using heavy machinery such as power shovels, they cleared wreckage and debris from the main shopping street in Kamaishi City and worked to restore public facilities. The damage in this region was so extensive that there are still many areas where virtually no recovery work has been done. The disaster relief corps is planning to mobilize its members in two of these areas: Ofunato City and the northern Iwate village of Noda.

As of April 12, a total of 1,114 corps members from Akita, Mie, Gunma, Ishikawa, Shizuoka, Fukuoka, Osaka, and Nara dioceses had participated in the relief and recovery activities in central Iwate Prefecture.

The third region where the corps concentrated its relief efforts was southern Iwate Prefecture. Initially, the corps members based themselves at a church in Ichinoseki City, from which they distributed water to areas near the church as well as Kesennuma City in Miyagi Prefecture. Relocating their base of operations to a public facility in Ichinoseki City on March 24, the corps from Saitama, Toyama, Chiba, Kanagawa, Aomori, Nagano, Fukui, and Wakayama dioceses have been distributing water in Kesennuma City and running soup kitchens at evacuation centers in Rikuzentakata City. As of April 12, a total of 642 corps members had taken part in these activities in southern Iwate Prefecture.

Supporting these activities were a total of 396 members from the Church Headquarters corps and the Oyasato corps as well as from the Nara, Osaka, Hyogo, and Mie diocese corps, who kept the three bases of operations in Iwate and Miyagi prefectures supplied with goods and materials that were required for the corps’ relief and recovery operations. In Fukushima Prefecture, they delivered relief supplies to the Fukushima Diocese Office in Fukushima City and Iwakidaira Grand Church in Iwaki City in the immediate aftermath of the disaster. From April 13, the Oyasato corps among others will be setting up a base of operations in Inawashiro Town, from which the corps members will operate soup kitchens at various locations in Fukushima Prefecture.

As of April 12—a month after the earthquake and tsunami hit northeastern Japan—a total of 3,053 corps members from 29 dioceses had taken part in the relief and recovery activities in the affected areas. Tenrikyo Disaster Relief Hinokishin Corps Headquarters Leader Yuichi Tanaka comments: “During the month since the disaster, we performed relief activities such as distributing water and setting up emergency kitchens and we have now embarked on full-scale recovery operations. Even now, the situation in the disaster area is constantly changing due to the tremors that relentlessly shake the region, thus requiring us to stay alert and be adaptable in our response measures. The recovery efforts will require a long-term commitment. Keeping the welfare of the people affected by the disaster as our first concern, we are determined to continue to support the recovery of the region.”