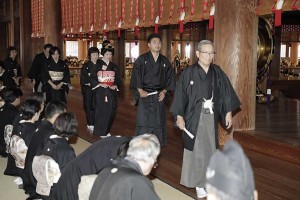 On September 1, the wedding ceremony of Successor-Designate Daisuke Nakayama, 26, and Nobue Kamikawa, 28, was duly conducted at the Foundress’ Sanctuary.

Shortly after 9:30 a.m., about an hour before the wedding ceremony began, the bride and groom left the Chuch Headquarters Staff Quarters and proceeded to the Main Sanctuary together with their families and relatives and the Service performers. After worshiping at the Main Sanctuary, they made their way to the Connecting Hall of the Foundress’ Sanctuary where the ceremony was to begin shortly.

The Shinbashira then arrived and proceeded to the upper dais in the Foundress’ Sanctuary. Shortly before 10:00 a.m., as the wedding ceremony commenced, the party paid their respects to Oyasama, clapping their hands in unison with the Shinbashira. Then the bride and groom proceeded to the middle dais, where they conducted a ritual exchange of sake. 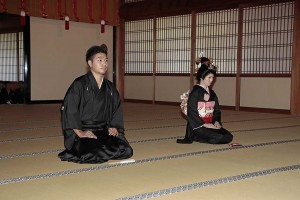 After midday, the bride and groom were driven in a convertible to Dining Hall 2 for their wedding reception. Cheers arose from onlookers who had gathered along the route to congratulate the couple. The newlyweds responded to them by smiling all the way. 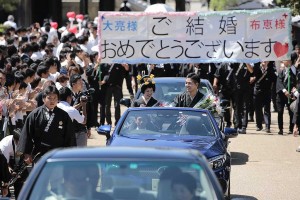 Born on January 23, 1991, as the first son of Rev. Zensuke Nakata and his wife, Michiko, Successor-Designate Daisuke Nakayama attended Tenri Elementary School, Tenri Junior High School, and Tenri High School, and received the truth of the Sazuke on January 11, 2009. He graduated from Kansai University majoring in policy studies in March 2013. Adopted by the Shinbashira and his wife, Mrs. Harue Nakayama, on April 4, 2013, he was designated as the future successor to the Shinbashira on October 24, 2013. After completing the Lay Minister Preparatory Course, he was registered as lay minister (kyoto) in December 2013. He then completed the Church Head Minister Qualification Course and was registered as a holder of the head minister qualification in February 2014. He was installed as the fifth president of the Young Men’s Association on August 25, 2014. He is now serving as diocese counselor for Nara. 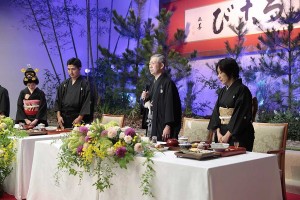 Born on August 3, 1989, as the second daughter of Rev. Shuji Kamikawa, and his wife, Emiko, Miss Kamikawa attended Kyoto Municipal Kinrin Elementary School, Kyoto Municipal Okazaki Junior High School, and Tenri Kyoko Gakuen High School. She received the truth of the Sazuke on January 10, 2008. After graduating from Tenri Junior Seminary and being registered as lay minister, she served at Kawaramachi Grand Church as a live-in trainee. She worked as an assistant leader of the young women in Kawaramachi Chapter in 2012. She completed Shuyoka, the three-month Spiritual Development Course, in July 2015 and the Lay Minister Preparatory Course in January 2016.