The 28th Young Women’s Convention Comes to an End

During about four months starting last August, a total of 19,293 people attended the 28th Young Women’s Convention, which had been held regionally at 142 venues, including 18 venues in 16 overseas countries and regions. The participants developed their awareness of the need to make repayment for God’s blessings through listening to a message from Women’s Association President Harue Nakayama and engaging in group discussions and other activities.

The Mission Center of Mexico, which was one of the overseas venues, hosted the convention on November 27 last year. The Mexico Chapter of the Women’s Association had spent almost a year preparing for the event. The chapter repeatedly provided training sessions for the staff members who were to lead group discussions. Last July, this chapter also conducted a church sleepover for young women at the mission center, where the participants raised their awareness of the convention while studying the ten aspects of the complete providence of God the Parent. 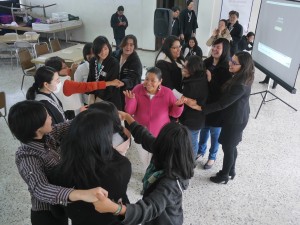 On the day of the convention, 32 people, including 12 young women, gathered at the mission center. Divided into four groups, the participants discussed the ways in which they could make repayment for the blessings of God. Following the group discussion, Mexico Chapter Chairwoman Yurie Watanabe read President Nakayama’s message in Japanese with simultaneous interpretation provided in Spanish. A representative of the young women then delivered a speech entitled “Steps toward the future,” in which she talked about her joy of faith and her resolutions for the days ahead.

Jhoana Montoya Hurtado, who serves as the leader of the young women in the Mexico Chapter, commented: “I spent quality time having good conversations with new friends during the group discussion. I also learned that we can convey the teachings to people around us not only by explaining them in words but also by performing any action that embodies them. I’ll make use of what I learned through the convention for our future activities.”