Follower Delivers Lecture on Tenrikyo Teachings at the University of London

Mr. Nobuyuki Takeuchi, who serves as head of Kyokushi London Mission Station located in London, delivered an extension lecture entitled “Tenrikyo: The Teachings of the Parent of All Humankind” at the School of Oriental and African Studies (SOAS), the University of London. Mr. Takeuchi was offered the opportunity to speak at the university at the suggestion of Prof. Michael Pye from Marburg University, Germany, which has an academic exchange agreement with Tenri University. The offer was made after Mr. Takeuchi started to attend the series of extension lectures given by Prof. Pye at SOAS last fall. 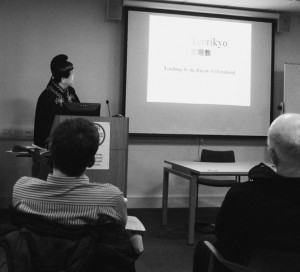 After graduating from Tenri High School, Mr. Takeuchi went to the U.K. in 1979 and opened a mission station in 1985. While engaging in missionary work, he was involved in the Young Men’s Association’s project to donate translations of Tenrikyo literature to major libraries around the world in 1998—which was one of the association’s 80th anniversary commemorative activities—as a committee member of the association’s Europe chapter. He donated such literature as the Ofudesaki and The Doctrine of Tenrikyo to as many as 100 universities and libraries in the country, including the British Library, which boasts one of the largest book collections in the world. Mr. Takeuchi keeps himself up to date on how those books are being utilized, for he is personally doing research on the current trends in the study of Japanese religions in the U.K.

Mr. Takeuchi’s lecture attracted about 20 people, including undergraduate students, graduate students, and auditors in the Department of Theology and Religious Studies. After showing a video featuring an overview of Tenrikyo, Mr. Takeuchi explained basic Tenrikyo teachings under four headings: God the Parent, the Foundress, the Service and the Sazuke, and the Truth of Origin. He highlighted the uniqueness of Tenrikyo by giving detailed explanations about the fundamental meaning of human existence based on the truth of heaven as well as the Ten Aspects of the Complete Providence of God the Parent as manifested in the human body and the world. In a Q-and-A session that followed, unique questions were raised from the floor, including: “Are followers prohibited from eating the sea creatures that appear in the Truth of Origin?” and “How do the educational institutions of Tenrikyo teach the Truth of Origin alongside the theory of evolution?”

Mr. Takeuchi shared his hope, saying: “Most Religious Studies classes in the U.K. do not touch upon Tenrikyo. I am looking to actively negotiate with the university so that I will be able to get more opportunities to share the teachings of Tenrikyo with the wider public.”