On January 26, the Oyasama 130th Anniversary Service—commemorating the 130th year since Oyasama withdrew from physical life on the lunar calendar date of January 26, 1887—was solemnly performed in the Main Sanctuary of Tenrikyo Church Headquarters with the Shinbashira presiding as chief officiant. In preparation for the anniversary, the Tenrikyo community had set aside a “three years, one thousand days” period for decisive efforts to attain spiritual growth and thereby respond to Oyasama’s parental love that single-heartedly desires to save all people. 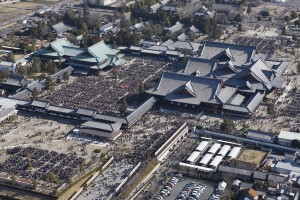 Approximately 200,000 followers, including about 2,800 people from overseas, returned to Jiba with their minds filled with the joy of observing the anniversary. They took the opportunity to express their gratitude to Oyasama for the blessings given during the past “three years, one thousand days” season and to renew their resolve to advance the path of world salvation.

At 10:28 a.m., the Shinbashira left the Staff Quarters with other Service performers for the Foundress’ Sanctuary and the Memorial Hall to pay their respects before proceeding to the Main Sanctuary.

In the Service prayer, the Shinbashira first expressed his gratitude for the guidance God the Parent provided during the years leading up to the 130th Anniversary of Oyasama. He said: “All of us Service performers, head ministers, and other Yoboku will take this opportunity to further heighten our awareness and joy of serving as Oyasama’s instruments. I pledge that we will make further progress in advancing single-hearted salvation by taking advantage of the strengths we have developed through carrying out our pre-anniversary activities.” He asked for the blessings that would allow people to take further steps toward the construction of the Joyous Life World.

The prayer was followed by the joyous performance of the Kagura Service—in which Successor-Designate Daisuke Nakayama served for the first time as one of the ten Service performers surrounding the Kanrodai. After the performance of the Kagura Service, the Shinbashira, his wife, and Successor-Designate Daisuke Nakayama proceeded to the Foundress’ Sanctuary to serve Oyasama Her meal.

Although the temperature was below freezing in the early morning hours, the Home of the Parent was bathed in gentle sunshine by the time the Dance with Hand Movements was performed. Worshipers, who had filled the Sanctuary precincts as well as the four worship halls, joined in single-heartedly singing the Mikagura-uta—the songs that accompany the Service.

After the performance of the Dance with Hand Movements, the Shinbashira took the podium to deliver the sermon, in which he first spoke words of appreciation: “I would first like to express my deep appreciation and gratitude for the utmost efforts you have devoted to the pre-anniversary activities for which we set aside ‘three years, one thousand days’ leading up to the 130th Anniversary of Oyasama. I truly appreciate all your efforts. Thank you very much indeed.”

In order to ensure a proper understanding of God the Parent’s intention embodied in the day of origin of the anniversaries of Oyasama, he next described the events that were happening at the Residence during the forty-nine days leading up to the lunar calender date of January 26, 1887, while referring to chapter 10 of The Life of Oyasama, entitled “The Portals Opened.” He explained Oyasama’s deep parental love for all human beings, Her children, saying that it was because of Her love that She shortened Her life by twenty-five years to step out to level the ground throughout the world through working by virtue of Her eternal life.

Regarding the pre-anniversary momentum built by the entire Tenrikyo community, the Shinbashira said: “Oyasama’s anniversary is not the finish line. It is but a milestone on our long journey toward the salvation of all humankind and the realization of the Joyous Life World. . . . Instead of letting the pre-anniversary momentum fall away, it is essential to maintain it and build on it as we carry out our activities from now.” He emphasized the importance of nurturing Yoboku who would perform the tasks of the path in the coming generations, saying, “I strongly feel that there is a particularly urgent need to nurture and train human resources that can carry the path forward in the times ahead.”

He concluded his sermon by saying: “In addition to ensuring that the seeds that have been sown over the past ‘three years, one thousand days’ bear fruit, I would like you to conduct activities such as those aimed at nurturing people from a long-range perspective as you move forward in a sustained and committed way toward the realization of the Joyous Life World. Please embark on the next stage of the journey in high spirits.” 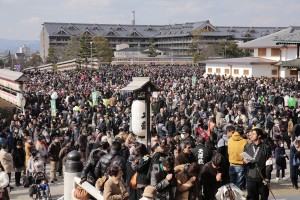 Following the sermon, all the Service performers proceeded to the Foundress’ Sanctuary, where the Shinbashira read a prayer to Oyasama. Having reported to Her that all followers had focused on making repayment for the blessings they received during the pre-anniversary season, he said: “Thanks to Your deep parental love in guiding us during that period, we were able to follow the path of spiritual growth and finally reach the milestone represented by Your anniversary today. We have spiritedly performed the Service just as You taught us right in front of God the Parent. Now we have proceeded into Your presence to extend our gratitude for Your boundless blessings. Thank you very much, Oyasama.” He also made a pledge to Her, saying, “Taking today’s occasion as our new point of departure, all of us are determined to respond to Your parental love by following Your Divine Model in unity of mind and by dedicating our utmost to single-hearted salvation in high spirits.”

Shortly after the prayer, the musical siren sounded at 2:00 p.m., marking the time of Oyasama’s withdrawal from physical life. The Sanctuary precincts were surrounded by the silence of people’s prayer to Oyasama for a moment.