The Autumn Grand Service was performed in the Main Sanctuary with the Shinbashira presiding as chief officiant on October 26, commemorating the day of the founding of the Teaching in 1838—the day when Oyasama was settled as the Shrine of Tsukihi as God the Parent became openly revealed in this world. The Service drew approximately 90,000 Yoboku and followers, including those from 20 overseas countries and regions. Between the 24th and 27th, in addition, a number of pilgrimage groups for the Besseki lectures returned to the Home of the Parent; a total of 7,871 people attended the Besseki lectures, with 2,035 of them attending their first lecture.

On the Service day, the Home of the Parent was blessed with a clear autumn sky. Among those filing into the Worship Halls were wheel chair users and the elderly who took advantage of the new wheelchair-ramp-equipped entrance building, whose construction had been completed on September 24.

At 8:00 a.m., the hour at which Oyasama was settled as the Shrine of Tsukihi, the Shinbashira left the Staff Quarters with other Service performers for the Foundress’ Sanctuary and the Memorial Hall to pay their respects before proceeding to the Main Sanctuary.

In the Service prayer, the Shinbashira first expressed his appreciation for God’s unchanging parental heart, with which we have been guided along the path leading to the Joyous Life since the founding of the Teaching. He then said: “On October 9, we conducted the ceremony to commence the formal preparations for replacing the Kanrodai. Subsequently, the ceremony to replace the Kanrodai was conducted on the 24th. With three months remaining before the 130th Anniversary of Oyasama, the Kanrodai was thus newly replaced. All of us Yoboku including church head ministers are determined to exert ourselves with renewed minds to make further and solid progress on the path of single-hearted salvation and fulfill our resolutions and goals by striving to further implement missionary and salvation work and provide nurturing and guidance for others.”

Following the prayer, the Kagura Service and the Dance with Hand Movements were joyously performed with the newly replaced Kanrodai as the core. Having filled the Worship Halls, the Corridors, the Inner Courtyard, and most other areas in the Sanctuary precincts, the worshipers joined together in singing the Mikagura-uta, the songs for the Service, with their minds united as one. 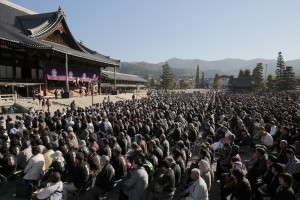 The Shinbashira then took the podium to deliver the sermon, in which he explained the meaning of the Kanrodai, referring to the recent replacement of it. He also urged the congregation to continue to perform the tasks of the pre-anniversary season with an ever stronger sense of commitment in the remaining three months before the 130th Anniversary of Oyasama.