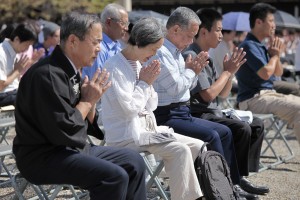 The September Monthly Service of Tenrikyo Church Headquarters was conducted on the 26th in the Main Sanctuary with the Shinbashira presiding as chief officiant.

The Shinbashira began the Service prayer by expressing gratitude for the boundless blessings through which God the Parent constantly watches over us and guides us to the Joyous Life. He then pledged that all church head ministers and Yoboku would align themselves with the Parent’s urgent desire to have them attain spiritual growth during this important season when the 130th Anniversary of Oyasama is so close at hand. He also vowed that the followers would make a concerted effort to fully carry out the tasks of sprinkling the fragrance of the teachings and engaging in salvation work and devote their utmost efforts to fulfilling the resolutions they set for this pre-anniversary season.

Further, noting that September is the month designated for making a focused effort to sprinkle the fragrance of the teachings and that Tenrikyo Nioigake Day would be conducted over the last three days of the month, the Shinbashira said, “All Yoboku, following the example set by the church head ministers, will strive to convey Your parental heart to as many people as possible.”

The prayer was followed by the joyous performance of the Kagura Service and the Dance with Hand Movements. The followers joined in the performance by singing the songs for the Service with their minds in unison.

After the Service performance, Honbu-in Zenpei Kubo took the podium to deliver the sermon. He began by reviewing the circumstances leading up to Oyasama’s withdrawal from physical life—the event in which Oyasama’s anniversaries have their origin. Explaining that the early followers’ concern for Oyasama’s physical safety had prevented them from obediently implementing the instructions She was giving them, he went on to say, “Since this path was passed down to us by those early followers, I believe it is extremely important for us to place our complete faith in what Oyasama taught us and implement it obediently in a spirit of simple openness.” To illustrate how one can place complete faith in the teachings and implement them obediently in a spirit of simple openness, he recounted the story of how the Honseki, Izo Iburi, originally came to have faith in Oyasama, in addition to citing anecdote 49, “Obedient Mind,” from Anecdotes of Oyasama, the Foundress of Tenrikyo.

Next, Honbu-in Kubo shared an episode from the days when he was spreading the teachings as a resident of a Tenrikyo missionary house. The story concerned a woman he brought back to Jiba. Though she had been suffering from herpes, she never once felt any pain during her entire stay in Jiba. “What this taught me,” he said, “was that we should not shy away from implementing salvation work just because we may not be fully confident of being able to receive blessings for the people we are working with.” He went on to suggest that even people who presently lack that confidence can assuredly receive blessings of salvation so long as they rely on God the Parent and Oyasama and maintain faith that blessings will indeed be shown to them. “In the course of implementing the teachings in this manner,” he continued, “you will assuredly be shown ‘something’ that will give you the confidence to embrace unshakable faith.”

Honbu-in Kubo then told the congregation that his father, the third Shinbashira, Zenye Nakayama, had instructed him: “Never be so arrogant as to imagine that you can save others through your own power.” The speaker explained that, since this world depends entirely on God the Parent’s workings, it is impossible to go through life relying only on one’s own knowledge and strength. “We should, therefore, seek the intention of God the Parent and Oyasama in the things that happen in our lives and make an effort to respond to that intention. By making a steady effort to implement the teachings in our lives, a path will surely open before us. What my father was teaching me, I believe, was that the most important thing is to follow the teachings exactly as they were taught and to make an honest effort to implement them obediently.”

After citing the verse “Whatever may happen, from now on, I will go single-heartedly leaning on God” (Mikagura-uta III:7), the speaker wrapped up his sermon by saying: “I hope that all of us will take advantage of this important season by taking a fresh look at the way we use our mind and meet the upcoming anniversary of Oyasama with an ‘obedient mind’ and ‘honest mind.’”