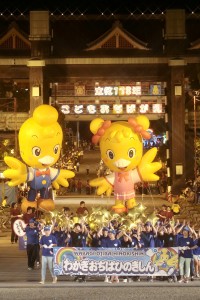 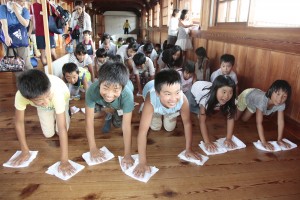 Tenrikyo Church Headquarters hosted the Children’s Pilgrimage to Jiba between July 26 and August 4 under the new theme “Spreading smiles! Help each other!” in the hope that children would learn to help one another through the event and feel the joy of helping others and that their joyous smiles would spread in the Home of the Parent and beyond. For this annual summer festival in the final year of the pre-anniversary period, a total of 253,541 children and adult leaders—approximately 15,000 more than last year—returned to the Home of the Parent from all over Japan and 16 overseas countries and regions, namely: Brazil, Canada, Colombia, Ecuador, France, Germany, Hawaii, Italy, Hong Kong, Mongolia, Singapore, South Korea, Sri Lanka, Taiwan, Thailand, and the U.S. mainland. The children came away with lifelong memories they made through participating in a variety of activities and attractions and staying together with other children in followers dormitories.
The event kicked off at 1:00 p.m. upon the conclusion of the July Monthly Service at Church Headquarters. The high temperature exceeding 35°C (95°F) on most days during the 10-day period, the Boys and Girls Hinokishin Corps members, assigned to tea tents scattered throughout the event venues, served ice-cold tea to pilgrimage participants.
Last year marked the 60th year since the Children’s Pilgrimage was launched under the name “Children’s Hinokishin Pilgrimage to Jiba” in 1954 with the original intention of providing children of the path with the opportunity to carry even one basket of earth in the midst of the construction of the first wings of the Oyasato-yakata building-complex. Earth-carrying hinokishin has since been conducted as one of the original activities of the event. This year, just as in every previous year, many children spiritedly engaged in the hinokishin despite the sweltering heat.
This year, a new attraction called “Ritoru Magajin World” was held in South Right Wing 2 of the Oyasato-yakata building-complex. Featuring stage performances, games, and exhibits concerning Ritoru magajin—the association’s monthly comic magazine available in Japanese—the attraction was designed to help children to become familiar with the magazine. Students from Tenri University and Shiraume Dormitory—a dormitory for young women studying to become preschool teachers—served as staff members in the venue.
The participants were first escorted into an auditorium, where they learned about the contents of the magazine through a short film and a quiz. They also listened to a storyteller reading “Oyasama and Early Followers”—a narrative series featured in the magazine. On a different floor, there were five sections, including “Ritomaga Lab” and “Comic Area,” where the children were able to get the feel of the magazine by enjoying a variety of games, activities, and exhibits. They were also able to have their pictures taken in costumes of cartoon characters from the magazine.
July 27 was the first day of the “Fife and Drum Bands on Parade.” This year marks the 40th year since this contest started. 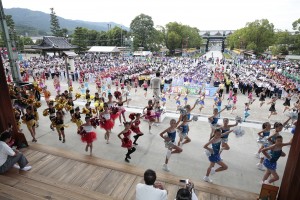 Tenrikyo’s fife and drum band activities originated from the idea that it would be helpful for children to learn how to work in groups through playing music as a band. In order to promote fife and drum band activities in the Tenrikyo community, a fife-and-drum-band leaders training session was held for the first time in the Home of the Parent in 1955. The participants then began to teach children at their churches or in their dioceses and formed bands in many parts of the country. The first offertory performance at the Children’s Hinokishin Pilgrimage to Jiba was given in the same year. In 1970, the Fife and Drum Band Festival was started as a competition of marching and music performance and in 1975 became the “Fife and Drum Bands on Parade.” Originally, participating bands marched south from the area in front of the South Worship Hall down Shinnan Avenue.
Aichi Diocese Nishi Ward District Fife and Drum Band commemorated its 60th anniversary last year. The band has participated in the “Fife and Drum Bands on Parade” every year since its founding. In addition, when they return to Jiba for the Sechi Festival in January, they give an offertory performance in front of the South Worship Hall every year. Band director, Michitsugu Tanaka, head minister of Namihara Branch Church, said: “We have families in which three generations have been involved in the band activities. The band serves as a connection that helps nurture children into Yoboku. I intend to continue my efforts through the band to nurture children in the faith.”
At the “Morning Service” event at 8:00 a.m., great numbers of children filled the North, South, and East Worship Halls to attend the performance of the seated service led by the Shinbashira, who played the wooden clappers. After the service, the Shinbashira gave a talk to the participants. He first expressed his delight that so many people returned to Jiba, looking forward to the pilgrimage. He went on to tell them that being able to return on the Children’s Pilgrimage was due to the fact that they were in good health. “You may think that being in good health is nothing special to you,” the Shinbashira said. “But it should not be taken for granted. It is all thanks to God the Parent.”
Walking around the worship halls, he asked the children what their goals were for the summer break. Their answers included “I want to win a volleyball tournament,” “I want to swim in a pool,” and “I want to memorize the multiplication table.” After listening to those children with a smile, the Shinbashira said: “Being able to work on what you want to accomplish is a blessing from God. . . . God is giving us all kinds of blessings including bodily functions and everything we need for our life such as sun, rain, air, and wind. If you count every single blessing of God, there is no end to it.”
The Shinbashira then talked about the importance of the service in an easy-to-understand manner. “The service is a time when you extend your greetings to God, saying you have returned to Jiba safe and sound,” he said. “It is also a precious opportunity for you to say thank you to God for keeping you safe. . . . By performing the service, you can also pray that your parents, brothers and sisters, and friends will live in good health. If you find people around you who are sick, injured, or unhappy, it is important for you to perform the service in prayer for their quick recovery. . . . In a broad perspective, you can pray that this world will become a little more peaceful than it is. If people in the world offer a prayer with their minds united, God the Parent will be happier than ever and work for us.”
He concluded his talk by saying: “If you perform the service with a bright and spirited mind, God will be happy and work in response to your prayer in a way that will guide this world to the Joyous Life. . . . I hope that you keep in mind what you learned here in Jiba even after you go home. If you live in a church or have a home shrine, please perform the service with all your heart so that you can bring joy to God the Parent and Oyasama.”
After the Oyasato Parade on the last day of the pilgrimage, the closing ceremony known as “Finale” took place, where the participants pledged together to come back again next year.