The 2015 Oyasato Seminar began on July 10 with English Courses I and III as well as the Chinese and Portuguese courses, drawing a total of 61 participants from eight countries and regions: Brazil, Canada, Hawaii, Hong Kong, Indonesia, New Zealand, Taiwan, and the U.S. mainland.

The seminar is an annual summer event originally launched in 1984 to help nurture successors of the path, mainly high-school-age students living in overseas countries. In recent years, increasing numbers of students have been encouraged to take part in the seminar by their parents who had completed the seminar themselves. Among them was Jaryn-Anthony Tomoyoshi Mendoza, an English Course I student, who belongs to Honrikuto Church in California. He said: “Although I hadn’t voluntarily learned the teachings before, I decided to participate in the seminar because my mother said, ‘You will be blessed with many wonderful encounters.’ I’m looking forward to seeing what kind of encounters are waiting for me.” 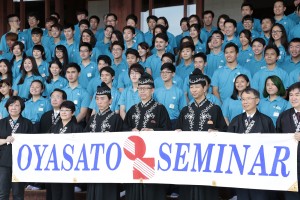 At the opening ceremony, Tenrikyo Overseas Department Head Yoichiro Miyamori delivered an address, in which he said: “Why do you think that God the Parent drew you to Jiba? During the seminar, I would like you to carefully think about it while learning the teachings.” After the ceremony, students performed a prayer service in the South Worship Hall wearing matching blue polo shirts.

As the first Indonesian participant in the Oyasato Seminar, Karina Boenardi joined English Course I. She said: “I learned about the importance of mutual help and the meaning of hinokishin from my grandfather who had come to the faith in Indonesia. Since English is not my mother tongue, I may sometimes find it difficult to fully understand the lectures. Yet, I’ll do my best to learn the teachings so that I can please my family.”

The participants spent about two weeks in and around Jiba learning Oyasama’s teachings and sowing seeds of sincerity. In the first half of the seminar, students in English Course I as well as the Chinese and Portuguese courses attended lectures on the basic teachings and practice sessions for the dance and the musical instruments for the service. They also visited some historical sites associated with the life of Oyasama. 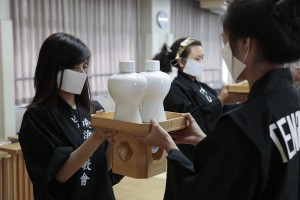 On July 16, students in the three courses crossed the Jusan Pass. Until the previous day, it had been uncertain whether or not they could conduct the event as scheduled because of a typhoon. Therefore, they moved the schedule forward and started walking on the morning of the day—instead of the afternoon as originally scheduled. Allana Lemos de Andrade, a Portuguese Course student, said: “Hearing about the typhoon and the schedule change, we course members discussed what the intention of God the Parent was. We could then give thought to the effort of our predecessors who walked far to return to Jiba, which helped unite our minds as one. I was able to confirm that we could find the blessings even in a seemingly unwanted situation.” Toward the end of the walk, one of the Portuguese Course students had a pain in her legs, and Allana administered the Sazuke to her. The pain went away, and she successfully came back to the Home of the Parent with Allana.

In the meantime, during the first half of the seminar, students of English Course III—which is designed for those who previously completed Course I in Jiba and Course II in their respective regions—engaged in activities that focused on the implementation of the teachings. For instance, they stood guard at the Main Sanctuary with members of the Precincts Section of Church Headquarters.

In the second half of the seminar, the four courses went to Aichi, Ishikawa, Hyogo, and Okayama prefectures, respectively, to engage in spreading the name of God, giving roadside speeches, and doing door-to-door missionary work with local missionaries.

English Course III went to Aichi Prefecture. Taylor Jo Bonachita, who belongs to Kapaa Church in Hawaii, decided to give her roadside speech about how she had been born after a hard labor that could have taken the lives of both her and her mother.  She commented: “Apparently, our doctor said, ‘We have no choice but to give up on the life of either the mother or the child.’ But after my grandparents administered the Sazuke to us, miraculously we were both saved. Having taken to heart Oyasama’s words ‘Earnestly tell others how you were saved,’ I want to tell people about this in my roadside speech.” She gave her speech on a busy street, enthusiastically talking about how she had been saved. 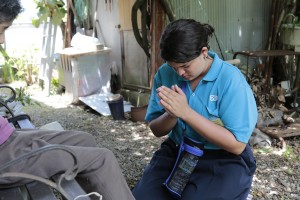 Most students of the Portuguese Course had attended the Besseki lectures and become Yoboku before the beginning of the seminar. On the third day of the mission caravan in Okayama Prefecture, Lucas Tioda Antonini had an opportunity to administer the Sazuke to an elderly man during door-to-door missionary work. “I administered the Sazuke to a man who had problems with his ears. He was very pleased. Although I had been hesitant at first, I realized that something marvelous could be received if we straightforwardly implemented what we were taught,” he said with a smile.

The Chinese Course as well as English Courses I and III concluded on July 25, and the Portuguese Course finished on July 27. The Korean Course was held from August 3 to the 15th with 16 participants from South Korea.