Tenri High School’s Day Course
Tenri High School’s day course conducted its graduation ceremony in the presence of the Shinbashira on the morning of February 22 in the school’s multipurpose gymnasium. The ceremony honoring the 415 graduates (219 boys, 196 girls) was attended by their parents, teachers, and underclassmen. 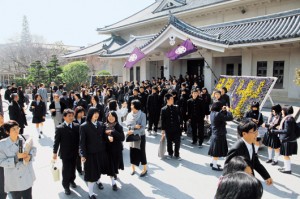 Principal Shigehiko Iburi presented the diplomas of the graduates to class representatives and then delivered an address. After noting the importance of developing human relationships based on Oyasama’s teachings, he touched upon the fact that the graduates had entered the school in the year that marked the milestone of its 100th anniversary. He then said, “My hope is that each of you will have a sense of pride and mission as a graduate of Tenri High School.”

The Shinbashira then took the podium to address the graduates. He stressed that all of the graduates were able to study at Tenri High School because God the Parent had drawn them. After explaining the positions and roles that Yoboku ought to fulfill, he encouraged the graduates by saying, “My hope is that you will seek to not only expand your knowledge but also grow as a person by putting the teachings into practice so as to be able to bring joy and reassurance to God the Parent.”

In addition to the diplomas, perfect attendance awards were presented not only to those who had never been absent during their three years of high school but also to those who had never missed a single day of school throughout their 12 years of primary and secondary education. An award was also given to a student who had made outstanding achievements.

After presenting diplomas to the graduates, Principal Shigehiko Iburi delivered a farewell address. Using the example of house pillars and the braces placed between pillars to support them, he said, “I am hoping that you will demonstrate your strength by maintaining a strong spirit like a pillar that supports a house as well as a sense of modesty like a brace that fulfills its role behind the scenes.” He then encouraged the graduates by saying, “I would like all of you to stay in high spirits, take good care of your health, and live up to the spirit that you cultivated in this school while maintaining a sense of pride as a graduate of Tenri High School’s evening course.” 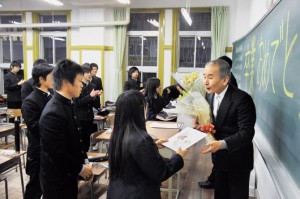 The Shinbashira then began his address by expressing admiration for the members of the graduating class, who had spent four years working at Tenrikyo offices and facilities in the daytime while attending classes in the evening. Referring to the fact that the graduates had become Yoboku in their third year, he said: “You are now in your first year as Yoboku. I hope you will become a person who can think and act based on the teachings.”

Following the ceremony, the graduates attended their last homeroom class and then proceeded to the Main Sanctuary to perform a thanksgiving service.

Tenri Kyoko Gakuen High School
Tenri Kyoko Gakuen High School conducted its graduation ceremony in the school’s Auditorium 2 on February 23 in the presence of the Shinbashira and the former Shinbashira. Principal Satoshi Nakamura presented diplomas individually to the 192 graduates (98 boys, 94 girls). In his speech, Principal Nakamura spoke on the importance of administering the Sazuke to as many people as possible and then encouraged the graduates by saying, “I hope that you will faithfully follow the path that your parents have followed so as to be able to grow into fine Yoboku who can contribute to the construction of the Joyous Life World.”

The Shinbashira then delivered an address. After explaining how significant it was for them to study at the school, which is attached to Tenri Seminary, he encouraged the graduates by saying, “I would like to ask you to always keep in mind what you have learned at this school and continue to make efforts to implement it in the course of your daily life.” 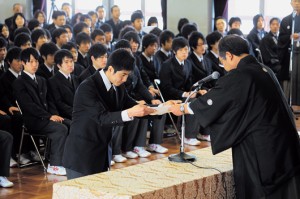 Tenrikyo Language Institute
The graduation ceremony for Tenrikyo Language Institute (TLI) was held on March 8 in the institute’s assembly hall. Principal Harunori Watanabe presented diplomas to the 61 graduates of the institute’s two departments: Japanese Language Department, 40; and Oyasato Fusekomi Department, 21. The graduates were from 14 overseas countries and regions: Brazil, Colombia, Hawaii, Hong Kong, Kenya, Laos, Malaysia, Mexico, the Philippines, South Korea, Taiwan, Thailand, the U.S. mainland, and Vietnam. Some of the graduates were dressed in their respective countries’ traditional attire.

In his farewell address, Principal Watanabe gave words of encouragement to the graduates, who  were going to embark on their new journeys in their respective countries and regions. “You may be worried that you may encounter difficult times when you leave the Home of the Parent,” he said, “but I am hoping that you will try to accept everything as a task given by God and take delight in fulfilling it while keeping in mind the spirit of saving others.”

Tenri Seminary
A joint graduation ceremony was conducted on March 9 for the 84 graduates of Tenri Seminary’s three courses: Tenri Graduate Seminary’s research program, 2; Tenri Graduate Seminary’s practical training program, 14; and Junior Seminary, 68. Tenri Seminary, whose principal goal is to nurture human resources who can take the lead on the path in the future, has a history of 111 years, making it Tenrikyo’s oldest school. Honored by the presence of the Shinbashira and the former Shinbashira, the members of the graduating class, who were attired in the formal service kimono, met the occasion with firm commitment to devote themselves to single-hearted salvation.

After presenting the graduates’ diplomas to their course representatives, Tenri Seminary President Motoo Matsuda delivered a farewell address. “I believe that the two years you spent in this school have given you great opportunities to sow seeds of sincerity for your future salvation work and thus will be a precious treasure throughout your lifetime,” said President Matsuda, adding: “I would like to encourage you to keep in mind your goal as a person working for world salvation and maintain an awareness of being engaged in that mission—no matter what kind of career you might pursue in your respective regions. I sincerely hope that you will continue making sure and steady efforts to straightforwardly follow the path toward spiritual maturity.”

The Shinbashira then began his address by expressing admiration for the members of the graduating class, who had not only undertaken academic work but also engaged in various kinds of practical tasks. He then spoke about the school’s motto: “Seek the path and sow seeds of sincerity.” He stressed that it is important to inquire into the intention of God the Parent and Oyasama through various kinds of tasks and thereby gain deeper understanding of the divine intention. He then asked the graduates to continue their efforts to seek the path and sow seeds of sincerity, noting that these two should go hand in hand.

The Shinbashira then urged the graduates to base their thoughts and actions on the teachings and said: “Among all Yoboku, you are Yoboku who studied at Tenri Seminary. I am hoping that all of you are wearing the formal service kimono because you have the awareness of being Yoboku who graduated from this school.” He concluded his address by saying, “My hope is that you will continue your efforts to become Yoboku who are useful to Oyasama.”