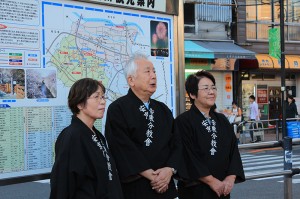 “Hello, everyone! We are followers of the Tenrikyo faith. . . .” In October 2014, Haruo Yamagishi (73) and his wife, Ayako (70), were giving roadside speeches with other followers from the local community at JR Itabashi Station, where there were streams of office workers hurrying home from work. Haruo had never imagined that he could stand at a street corner and give a speech to share the joy of faith using his own voice again. Ayako was standing by her husband with a gentle smile.

In spring 2009, Haruo felt that something was wrong with him while at home. He could not feel his body, so he asked Ayako to call an ambulance. Rushed to the hospital, he found himself paralyzed on the right side of his body. Even though his two-year-old granddaughter called his name, he was not able to respond. “I believe this is either due to a cerebral infarction or hemorrhage. Either way he has at most three more days to live,” said the doctor.

Haruo is a second-generation follower. After graduating from junior high school, he started to make a living from phototypesetting and had worked at a television station until his retirement. Ayako only got to know the faith after marriage, but she became a devout follower after their eldest son had the blessing of being saved from an illness. No matter how busy he was, Haruo never missed returning to Jiba once a month. Also, since the church they belong to is in Fukuoka (located approximately 885 kilometers [550 mi.] west of their home), they have proactively participated in Tenrikyo’s district activities and tried to deepen ties with followers in the local community.

Reflecting on the efforts they had made to follow the path, Ayako had a hard time accepting her husband’s severe illness. She barely managed to put her hands together in prayer even when their daughter—Mutsumi (43), who married the future successor to the head minister of Tenrikyo Honhorikiri Branch Church in Katsushika, Tokyo—rushed to the hospital and administered the Sazuke.

On the day of Haruo’s hospitalization, the prayer service was conducted at the church to which they belong with Rev. Masao Shimizu, the head minister, as the core. He encouraged Ayako by saying: “Whatever is shown in our daily lives contains messages from God. The important thing is to make efforts to understand them and transform adversity into a source of joy.”

On the following day, Haruo recovered enough to feel his right leg. Within several days, he was able to voluntarily move the leg. That was a miraculous blessing of recovery that amazed his doctor. A later examination revealed that he had suffered left cerebral infarction, and a course of treatment was determined.

Haruo’s partial recovery brought relief to Ayako, but, even after that, she had difficulty eating and sleeping for many days. She appeared calm in front of her husband, but she could not help weeping behind him and could not handle the housework. Mutsumi, her daughter, wholeheartedly supported Ayako, staying with her at home and helping her out with the housework. Haruo’s friends, who had got to know him through the local activities of Tenrikyo Young Men’s Association, visited him and administered the Sazuke one after another. A female follower who lives in the neighborhood also came to listen to Ayako kindheartedly. Thanks to their support, Ayako gradually regained her former cheerfulness. She says: “I really appreciated having people who share the same faith including the head minister, my family, and other Tenrikyo followers. God the Parent must have tried to teach me through my husband’s illness that we are able to find joy under any circumstances.” After Haruo was discharged from the hospital, Ayako patiently helped him with his rehabilitation. He recovered enough to walk and talk in three months.

But their joy was short-lived. In October 2009, Haruo had another infarction, this time in the right cerebral hemisphere. According to the doctor, it was inevitable that Haruo would develop dementia due to the infarction. However, Ayako was able to accept the situation positively, grateful that she could ask for help immediately because he collapsed in front of her. She also thought that having an illness twice in the brain might indicate a message from God the Parent that they should lower their heads and learn to be humble in following the path. Feeling at peace, she administered the Sazuke, which she was not able to do when her husband had the first cerebral infarction. After being released from the hospital, Haruo spent every day working on his rehabilitation. About a year and a half later, he was able to walk again, but he could neither speak nor express emotions.

It was in the winter of 2011 that a Tenrikyo follower living in the local community told Ayako of a hinokishin activity that is conducted on the 26th of every month to provide wheelchair users with a helping hand in and around the Main Sanctuary. On hearing that, she contacted the Social Welfare Section of Tenrikyo Mission Department and started to participate in the hinokishin, wishing to be of help even if only in a small way to those who return to Jiba.

After a while, Ayako invited Haruo to join the hinokishin because the blessings of recovery he had received had made Ayako realize that they should do whatever they could to help others while borrowing a body and that doing so is the mission that God has entrusted to them. On September 26, 2012, Haruo started to take part in the hinokishin. Ayako was assigned to the ground-level area under the West Worship Hall whereas Haruo was assigned to the parking lot for the disabled. Nothing gave them greater joy than to make a pilgrimage to Jiba every month and participate in the hinokishin together.

It was toward the end of 2012 when they were at the kitchen table at home in Tokyo after coming back from the hinokishin that Haruo spoke all of a sudden, saying, “Sweetheart, the thing you have been looking for is probably on that shelf. . . .” Ayako could not believe what she was hearing because her husband had been speechless and emotionless for over two years due to the aftereffects of the infarction. She was overwhelmed with amazement and joy. She says: “This was thanks to the hinokishin in which we engaged at Jiba. How precious the truth of Jiba is!”

Haruo and Ayako have been continuing the hinokishin at Jiba and also participating in other activities to help others including visiting areas affected by the Great East Japan Earthquake to prepare meals, spreading the name of God, and giving roadside speeches with other followers. Living each day in high spirits, they say: “The illness allowed us to feel greater joy of being able to follow the faith together. We would like to do everything with joy as long as we are kept alive by God, for we believe that that is the way to make repayment for the abundant blessings we have received.”