Home News Tenrikyo Associations Announce Their Guidelines and Plans for 2015

Tenrikyo Associations Announce Their Guidelines and Plans for 2015

Between January 25 and 28—around the day of the Spring Grand Service—the Women’s Association, the Boys and Girls Association, and the Young Men’s Association held their respective first meetings of the year and announced their activity guidelines and plans for this year.

On January 27 and 28, Tenrikyo Women’s Association held a seminar for the chairwomen of directly supervised chapters and diocese chapters at Moya 38 with an attendance of 248 people. It was announced that the association would continue to promote the same slogan for spiritual maturity as in previous years—“Let’s follow the Divine Model and become the foundation for the Joyous Life”—as well as its activity guidelines: “Let all of us Women’s Association members follow the path of making repayment for the blessings we receive. (1) Let’s implement the teachings and grow spiritually to be true Yoboku. (2) Let’s nurture those close to us into true Yoboku.”

In the seminar, Association President Harue Nakayama addressed the participants, drawing on the third Shinbashira’s words concerning the enhancement of church substance. After stating the importance of inheriting and carrying out resolutions that their predecessors had made when requesting the truth of a church name to establish their churches, she explained the way churches should serve as models of the Joyous Life and centers for single-hearted salvation. She then told the participants to try to carry out all their daily activities in the churches with an awareness that they are making repayment to God the Parent and Oyasama. 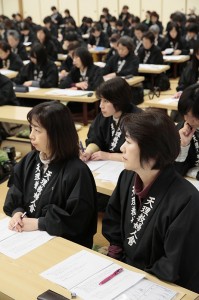 She went on to talk about how to nurture children who were born and raised in churches or in Tenrikyo families. “It is essential to nurture them into Yoboku who always remember their indebtedness to God the Parent and Oyasama and who maintain an awareness of working hard as Oyasama’s hands and feet,” President Nakayama said.

She also pointed out that, in order for Yoboku and followers to grow spiritually, it was crucial for them to visit their churches or listen to Tenrikyo talks as often as possible. She then emphasized that those in leading positions in the churches should make an effort to receive blessings that would bring their churches to the way they should be in addition to guiding Yoboku and followers in their neighborhood, regardless of their church affiliation, to make progress in their spiritual growth.

The president concluded her address by calling for the participants to work in high spirits during the last year of the pre-anniversary period while taking it to heart that missionary and salvation work is an act of repaying their indebtedness and can bring joy to God the Parent and Oyasama.

This seminar included other activities such as lectures and discussions.

This year’s association activities were announced as follows: The annual Women’s Association Convention will be held in the Inner Courtyard of Church Headquarters on April 19. On the evening of April 18, a lecture will be held as a commemorative event. Other activities include regular events such as the Lecture for Mothers and various seminars, as well as hinokishin activities.

On January 27, the Boys and Girls Association leaders’ first meeting of the year was held in Dining Hall 2, drawing 1,797 participants—including heads of directly supervised chapters and diocese chapters as well as members of the nurturing committees of those chapters.

The meeting began with an address by the Shinbashira, who serves as president of the association. First touching upon the fact that we have embarked on the final year of the “three years, one thousand days” activities leading up to the 130th Anniversary of Oyasama, he said, “Besides having all Yoboku make progress in their spiritual growth, I would like all of you to be in unity of mind and carry out energetic and substantial association activities as befits the final year of the pre-anniversary period.”

He then said that the Boys and Girls Association was established in the year of Oyasama’s 80th Anniversary and explained to the listeners that the association has regarded each year of an anniversary of Oyasama, which is observed once every decade, as an important juncture to give thought to the significance of the founding of the association. With regard to the lead-up to the 50th anniversary of the association, which will be observed next year, he said, “In order to make next year an occasion to embark on the next stage of your journey with renewed resolve, I would like you to make a conscious effort in conducting activities.”

He went on to explain the importance of conveying the teachings accurately to children who will lead the next generation of the path. He said, “The path of Oyasama’s Divine Model serves as the guidepost to the Joyous Life as well as the important model for nurturing successors of the path.” Basing himself on the Scriptures, he encouraged those who are entrusted with the role of nurturing others to make a daily effort to live their lives based on the teachings and in the spirit of single-heartedness with God. He went on to say, “Rather than merely telling the teachings to children, it is important to inspire them through your own example,” thus emphasizing the importance of having nurturers make repeated efforts to grow spiritually.

Concerning his expectation for the Boys and Girls Association, which was founded to carry out the vertical mission, he said, “Its mission is to guide children so that they will learn Oyasama’s teachings, implement them in a straightforward manner that is appropriate for their stage of growth, and become capable of finding out for themselves the true happiness that comes from living the Joyous Life.” After explaining that the fruit of sowing seeds of sincerity with a firm resolve to follow the path in single-heartedness with God will surely be carried on to the next generation, he said, “When you find joy in all situations and circumstances and follow the path with a bright and spirited mind, then your example will be reflected naturally in the minds of children.”

Before concluding, the Shinbashira touched on this year’s activity guidelines. He pointed out that the guidelines encourage parents and children—those who nurture others and those who are nurtured—to join together in implementing Oyasama’s Divine Model, and call for adults to practice the teachings proactively and make efforts to reflect the joy of faith and the joy of making repayment for blessings in the minds of children. He concluded his address by saying, “In order to move closer to the ideal state even a step or two during this seasonable time, I would like parents, children, and nurturers to give thought to the day of the founding of the association and carry out association activities in an ever more positive and proactive manner.”

Following the Shinbashira’s address, Association Chairman Daiichi Umetani gave an explanation of the association’s new activity guidelines. He said that a model of the vertical mission can be found in Oyasama’s Divine Model and said, “In order to ensure that the examples of parents who follow the path in single-heartedness with God will serve as the standard for children’s behavior in the course of their daily life, I would like you to make a conscious effort to communicate well with your children while guiding them to the path.”

Concerning one of the specific goals, “conducting church sleepovers and encouraging parent-and-child visits to churches, he emphasized the importance for children to stay connected to their church from a young age. He said, “I would like to promote church visits by families not just for monthly services and church activities but also for occasions such as children’s admission to school, graduation, and birthdays.”

Concerning the goal of “carrying out association activities intended to nurture junior high school students,” Chairman Umetani said that we should employ approaches that are appropriate for adolescents, who are in a transitional stage of physical and psychological growth. He said, “By paying attention to the fact that adolescents are receptive to positive peer influence, I would like you to provide guidance and nurture to adolescents with the utmost attention and care.”

Before concluding his talk, he said that the association will commemorate its 50th anniversary next year in 2016 (Tenrikyo 179). In order to ensure a thorough understanding of the purpose of conducting association activities and further promote the vertical mission, he announced that on February 26, 2015, the Seminar for All Chapter Leaders will be held at the Home of the Parent.

On the same day, the new song for this year’s Children’s Pilgrimage to Jiba, “Egao hirogare! Tasuke ai” was announced. The English version of the song, “Spreading Smiles! Help Each Other!” has been recorded and will be released soon.

The association’s first meeting of the year was held on January 25, attended by about 250 people including chapter chairmen from directly supervised churches and dioceses.

In the beginning of the meeting, Association President Daisuke Nakayama took the podium to address the participants. Referring to the ongoing efforts that directly supervised chapters have been making with their goals in mind, President Nakayama encouraged association members to further increase their efforts by saying, “If we keep working with a strong commitment to do whatever is necessary to achieve our resolutions, I’m sure that God the Parent and Oyasama will give us the blessings we seek.”

Association Chairman Masanao Nakayama then explained this year’s guidelines: “Increase the number of active members and grow spiritually.” He said that increasing the number of active members would have a direct impact on the state of churches and the state of the path in the future, emphasizing the importance of increasing the number of members who proactively engage in association activities in this seasonable time. In addition, concerning this year’s key activity— “For this year’s Missionary Campaign Week for All Chapters, each directly supervised chapter will strive to ensure that the number of its participating members exceeds the number of its affiliated churches”—the chairman said, “It is our hope that, with the increase of the number of members who engage in missionary work, we can be blessed with significant results in salvation work in our local communities.”

This year’s association activities were announced as follows: The 91st Young Men’s Association Convention will be held in the Inner Courtyard of Church Headquarters from 10:00 a.m. on October 27. A seminar for board members of directly supervised chapters is to be held on February 26 in the Home of the Parent.

Activities of directly supervised chapters include the association’s Missionary Campaign Week for All Chapters, scheduled for the week of September 6–13. As for regional activities, the association encourages members to participate with their families in the Heart-Clean Campaign, which is held on the first Sunday of each month except in August (second Sunday) and in September (third Sunday). This year’s Action Day for the campaign will be conducted on July 5. Moreover, as part of activities to nurture young members, directly supervised chapters will conduct the Arakitoryo Orientation, which targets high-school-age members, between March and August.