Having celebrated its 60th anniversary in May this year, the Mission Headquarters of Hawaii held a commemorative symposium at a local hotel on November 22. This symposium was designed to provide local followers with an opportunity to realize the preciousness of the teachings of the path and, thereby, to enhance their pride and confidence as followers of the path. Inviting Dr. Kazuo Murakami, Professor Emeritus of the University of Tsukuba as the guest speaker, the symposium drew about 160 people, including non-followers from the local community.

After the opening remarks by Bishop Shugo Yamanaka, a film entitled “Prayer: Conversation with Something Great” was shown. The film presents Dr. Murakami’s scientific approach to the power of prayer drawing on cutting-edge research into human consciousness. 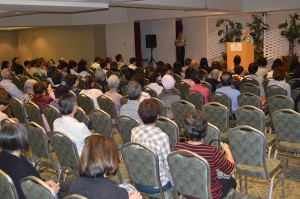 Dr. Murakami then delivered his address entitled “Stretching Our Possibilities by Switching on Our Genes.” Mentioning that the study of genetics is progressing very rapidly, he talked about his own study and experiences; for example, he started a research workshop on the mind and genes with a hypothesis that the functioning of the human mind, or the use of the human mind, has an impact on the switching on and off of genes. He explained the greatness of the workings of God the Parent and stressed the importance of being thankful for the workings.

On the following day, Dr. Murakami visited the mission headquarters and had a discussion session, in which he talked in a friendly manner with a total of 50 participants.