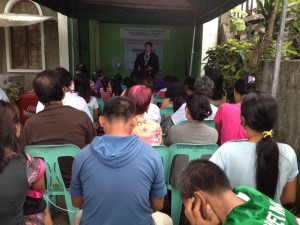 The Joyous Lecture was held at four venues including Tenrikyo Mission Center in the Philippines with a total participation of 159 people from September 12 through 14.

This comes as more and more followers serve as performers at the mission center’s monthly services this year. The center has been calling on followers to practice the hand movements before the monthly services of their mission stations and fellowships since last January when it announced that it would put emphasis on “the service and the Sazuke” in anticipation of the 130th Anniversary of Oyasama.

With the aim of conveying the teachings of the path to as many people as possible in this pre-anniversary season, the number of lecture venues was increased from two last year to four, which are in three cities: Santa Rosa, Metro Manila, and Manila, where Tenrikyo Mission Center in the Philippines is located. Moreover, 250 sheets of original flyers were prepared so that local followers were able to visit their neighbors with the flyers to invite them to join the lectures.

On September 13, Okaohara Parañaque Mission Station gathered 52 participants including 30 non-followers. Rev. Mitsuzo Nakanishi, the lecturer, stressed the importance of performing the service to sweep away the dust of mind. The lecture was followed by a practice session for the seated service. Charmy Martin, a 30-year-old Yoboku who invited five participants, said with a smile: “One of last year’s participants now comes to our mission station every day. I made a lot of efforts to distribute flyers and invite people, in order not to miss this pre-anniversary season.”

Rev. Makoto Hamada, head of Tenrikyo Mission Center in the Philippines, commented: “With the increased number of venues this year, many local followers were involved in setting up the venues, managing logistics, and serving as interpreters, not to mention inviting people to participate in the lectures. In order to ensure that this momentum continues in our pre-anniversary activities, we intend to increase our efforts in salvation work in this region.” 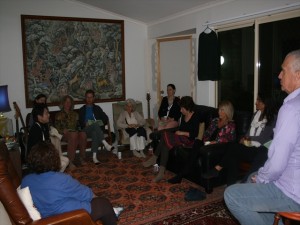 In Australia, the lectures were delivered by Mrs. Stacy Takahashi, wife of the head minister of Itakano Branch Church, at seven venues in several cities including Brisbane, Sydney, and Melbourne, drawing a total of 124 participants. For the first time in three years, the event also took place in Perth, the only western city among the five major Australian cities where more than 70% of the country’s total population live. In the Oceania region, the Joyous Life Lecture has continued to be held almost every year since 2000.

In preparation for this year’s lectures, Rev. Tomoharu Matsui, head of the Oceania Centre, worked closely with those who were responsible for each venue. “I told them that inviting non-Tenrikyo people to the lectures would lead to salvation work,” said Rev. Matsui, who also made proactive efforts to increase participants in the lectures.

Working with the Oceania Meeting—the meeting between the Overseas Department and directly supervised churches that have mission facilities in the Oceania region—local followers made arrangements and preparations for the lectures.

In the lectures, Mrs. Takahashi shared a variety of stories about salvation work based on her own experiences. In Australia, where there are many Christians, a lot of people seem to be used to listening to preaching. Comments from non-Tenrikyo participants included: “I was very surprised to hear the lecturer, who is in a similar position to a priest, share personal stories about how she and her family members were saved. Her stories were very new to me and intriguing.” After the lectures, the lecturer and staff members administered the Sazuke to those who requested it. Some participants talked with the lecturer about their personal worries.