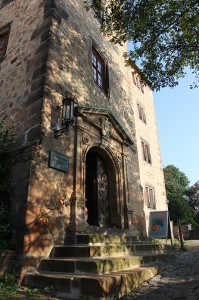 In 1975, for example, a Tenrikyo exhibition took place at Marburg University’s Central Library, which was attended by the third Shinbashira. The present Shinbashira later visited Marburg as well.

During the symposium, the participants made research presentations of their studies and held lively discussions on relationships between religion and material objects—such as works of art and architecture—from a variety of perspectives. Among the participants was Prof. Ulrike Wagner-Rau of Marburg University, who shed light on baptism with special reference to the use of water. She explained, “For Christians, water is not only a sacred tool used for baptism but also a constant reminder of their identity as Christians.”

Prof. Edith Franke, one of the first-time participants, reviewed the symposium, saying: “Through exchanging thoughts and ideas with those who are from various fields of study and different cultures, we can discover something new. This is what I admire about this symposium as a significant academic exchange.” 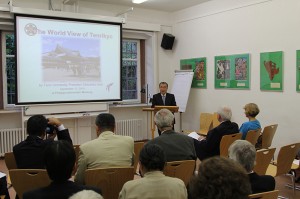 Prof. Yoshitsugu Sawai of Tenri University commented: “The second Shinbashira always hoped that Tenri University would become a central institute for religious studies in order for us to gain a deeper understanding of the teachings of Tenrikyo. We would like to contribute to the realization of his dream by continuing the exchanges with Marburg University—which have deepened over more than half a century—as well as this symposium into future generations.”

On the first day of the symposium, Tenri University President Masahiko Iburi delivered a speech on the teachings of Tenrikyo and the Divine Model of Oyasama while showing slides. He also explained that Tenri University aims to promote three underlying themes based on the teachings: religious awareness, international awareness, and the spirit of selfless service. He said, “In order to foster students’ global perspectives, we would like to actively promote collaborative relationships with universities in different countries.”

On the 18th, President Iburi also visited the president of Marburg municipal assembly to hold talks on the establishment of a sister-city relationship, which is currently under consideration between the cities of Tenri and Marburg.