Home News Tenrikyo Prays with Other Religions for Peace in Antwerp

Tenrikyo Prays with Other Religions for Peace in Antwerp 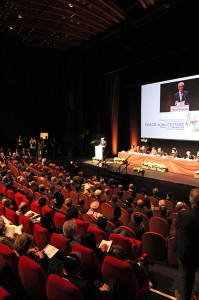 From September 7 to 9, nine delegates from Tenrikyo attended the International Meeting of Prayer for Peace, which was held under the theme “Peace Is the Future” in Antwerp, Belgium. With the participation of about 350 people including religious leaders, scholars, and government officials from many parts of the world, the meeting was organized by the Community of Sant’Egidio—a lay Catholic group headquartered in Rome. The Tenrikyo delegation included Honbu-in Noriaki Nagao, Europe Centre Head Yoshihisa Hasegawa, and Dai-Roma Mission Station Head Hideo Yamaguchi.
The meeting originally developed from the interreligious gathering convened in 1986 by Pope John Paul II, who invited religious leaders from across the world to gather in Assisi, a Catholic pilgrimage site in Italy. Each year after that, the Community of Sant’Egidio took the initiative to hold the meeting in a different city in Europe. Tenrikyo has participated in the meeting almost every year. Notably, the 2009 meeting in Krakow, Poland, was attended by the Shinbashira and his wife.
As in the past several years, Tenrikyo was asked to provide behind-the-scenes help due to connections and trust that local followers have developed with the community. This year, four followers served as interpreters.
The meeting started with the opening assembly on the evening of September 7. Notable participants included Mr. Herman Van Rompuy, the president of the European Council, and Professor Zygmunt Bauman, the world’s eminent sociologist who wrote Liquid Modernity. A message from Pope Francis was read as one of the welcome messages. “It is my hope,” His Holiness said in his message, “that these days of prayer and dialogue will serve as a powerful reminder that the pursuit of peace and understanding through prayer can forge lasting bonds of unity and prevail over the passions of war.” Then, European Council President Van Rompuy delivered a keynote address, in which he said, referring to the tension in the world today: “Living in peace means living with others in solidarity and with responsibility.” 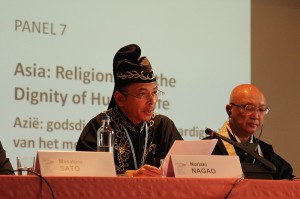 The next morning, Rev. Nagao served as a panelist in a session entitled “Asia: Religions and the Dignity of Human Life,” which was one of the twenty-five panel sessions featured in the meeting. Other panelists were religious leaders and scholars from India, Indonesia, and Japan. In his speech, Rev. Nagao emphasized the importance of life while explaining the core essence of the Tenrikyo teachings. In a question and answer session that followed, Rev. Nagao, basing himself on the teachings, gave detailed answers to the questions raised by the audience with regard to such topics as “death with dignity,” which has been an issue of argument in European countries.
Agostino Giovagnoli, who served as chairperson in the session, said: “Peace can be achieved only when the dignity of individual life is guaranteed. It was very informative to hear opinions from Tenrikyo and other religious traditions in Asia, where territorial disputes between nations are becoming serious issues.” 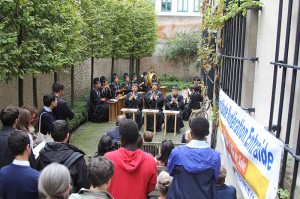 On the evening of the last day, participating religious groups were allocated separate venues to conduct their respective prayers for peace. The Tenrikyo delegation performed the seated service and the first half of the Dance with Hand Movements to the accompaniment of the musical instruments. In addition, Tenrikyo pamphlets were distributed to those who gathered. Among them was Odette Peterink, a museum curator, who commented: “I heard about Tenrikyo for the first time today. The teachings left me with a fresh feeling. Many religions pray for peace, but the Joyous Life World in the Tenrikyo faith seems like an idea that goes beyond peace. From looking at the solemn and gentle hand movements, I was able to imagine the kind of world Tenrikyo people are praying for.” 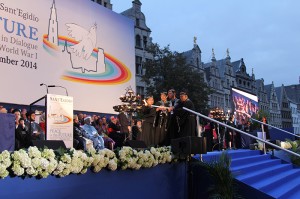 After the prayer, religious representatives marched in procession from their prayer locations to the square in front of the city hall, which is designated as a UNESCO World Heritage site. The final ceremony took place at the square in the presence of Queen Mathilde of Belgium. During the ceremony, leaders from all participating religions were on the stage, where they lit “candles for peace” and adopted an appeal for world peace.