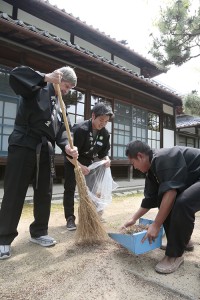 As part of the 876th session of Shuyoka—the three-month Spiritual Development Course offered in the Home of the Parent—the English class (attended by 16 students from seven countries and regions) and the Chinese class (attended by 15 students from Taiwan) were held from April through late June. With the participation of 13 students, the Thai class started on May 1 as part of the 877th session, which will continue till late July.

Shuyoka students start their day with the morning service at the Main Sanctuary. After a morning training session and breakfast at their followers dormitories, they go to class at Shuyoka. In the morning, there are classes on The Doctrine of Tenrikyo; The Life of Oyasama, Foundress of Tenrikyo; and the Mikagura-uta, The Songs for the Service, as well as service dance practices. In the afternoon, they practice the musical instruments for the service or engage in hinokishin.

Followers come to Shuyoka for a variety of reasons. In this article, five students share their feelings and experiences. Kyle Kikuchi, 30, returned to Jiba with firm resolve to make further spiritual growth in the lead-up to the 130th Anniversary of Oyasama. He came into contact with Tenrikyo five years ago when he was invited to join in hinokishin activities at Tenri Cultural Center, which is managed by the Mission Headquarters of Hawaii. “I had never been told thank you so many times as I was that day. I became interested in what the teachings were all about,” said Kyle.

In addition to learning the teachings and practicing the hand dance and musical instruments, he performed prayer services every day, wishing for his parents to recover from illness. Kyle said: “Instruction Three emphasizes salvation work. After Iʼm finished with Shuyoka, Iʼd like to administer the Sazuke not only to my parents but also to others who are suffering from illness. I also want to proactively convey the teachings to my coworkers.” 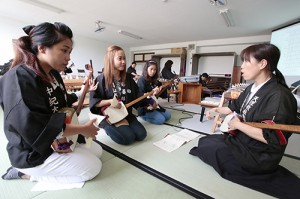 Santos Raquel, a 42-year-old follower from the Philippines, grew up in a non-Tenrikyo family. Ten years ago, her sister, Jaqueline, married the head minister of Honshintoku Branch Church, located in Aichi, Japan. Although Jaqueline invited her to return to Jiba, she had no interest at the time.

Last winter, when she was working in Dubai, the United Arab Emirates, she experienced acute headaches and vomiting and ended up losing consciousness. A medical examination showed that she had an aneurysm in her brain. The doctor told her that if the bulge in a blood vessel ruptured, her life could be on the line.

Prayer services were then performed at her sisterʼs church every day.

Earlier this year, when she had a pre-surgery check-up, she learned that the aneurysm was completely gone. In light of such a marvelous experience, what crossed her mind was Shuyoka, which she had been encouraged to attend. She readily made up her mind to enter Shuyoka.

“My Shuyoka friends are all nice. Iʼve been able to spend every day in high spirits,” Santos said. “In addition to sharing how I was saved with as many people as possible, I want to administer the Sazuke to people with illness without missing any chance to do so.” 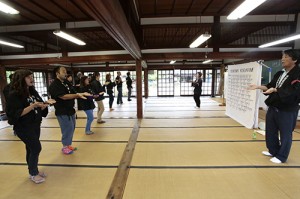 Meaghan Kaneshiro, 24, came to know Tenrikyo when she started dating the would-be successor to Koshinokuni Hawaii Churchʼs head minister three years ago. She became an active church member who attends the churchʼs monthly service every month and participates in hinokishin activities. Upon graduation from college, she came to the Home of the Parent for the first time to attend Shuyoka. Meaghan said with a smile: “I didnʼt have many chances to learn about the teachings. So what I learn in class is really interesting and new to me!” Particularly, the eight dusts of the mind seemed to stand out to her. “When I learned that the dust piled up in the mind can be swept clean with God as the broom, it clicked in my mind. My parents are not Tenrikyo, but I want to talk to them about the teachings in my own words.”

Lin-chen Shou-mei, a 77-year-old Taiwanese follower, came to the faith 35 years ago when her father-in-law was saved from an illness. She entered Shuyoka through the guidance of Mrs. Kazue Uemura, wife of the head minister of Akitsu Grand Church, who had visited her church in Taiwan last November.

Having had stiff knees since she was young, she was not able to sit on her legs for a long time. During Shuyoka, her classmates and dorm counselors administered the Sazuke to her knees every day.

After three weeks into Shuyoka, there was a sign of change in her knees. When she was doing morning Sanctuary cleaning, she felt her knees loosen up. She tried to sit on her legs. Though it was only a short period of time, she was able to sit down with her knees bent. “I felt Godʼs amazing workings first hand,” she said, adding with her eyes shining: “When I go back to Taiwan, I want to sprinkle the fragrance of the teachings and engage in salvation work as Oyasamaʼs instrument so that I can return to Jiba with many people from Taiwan.”

Benjawan Thongbut, 55, who received the truth of the Sazuke two years ago, returned to Jiba with her daughter, Thanwarat Saleephol, 19, to attend Shuyokaʼs Thai class. Last January, when Benjawan was dancing Song Four at the spring grand service of the Mission Center in Thailand, she thought that the song described the process of spiritual growth that enables the mind of wanting to be saved to become the mind of saving others. She felt that God the Parent was urging her to make further spiritual growth and help others be saved.

During Shuyoka, she proactively administered the Sazuke to her classmates with illness. She said, “After learning the teaching of a thing lent, a thing borrowed, I came to feel more strongly than before that I have to use my mind in a way that accords with the intention of God, who lends us the body.”

Last month, Benjawan attended the Oyasama 130th Anniversary Yoboku Gathering in the Home of the Parent. Referring to one of the films shown in the gathering, she stressed: “Colombian followers featured in the film were holding a study session at one of their homes. I want to use my home as a place to convey the teachings as well.”