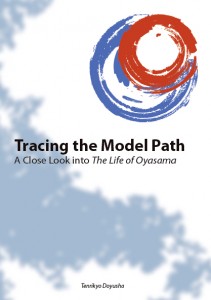 Published in 2014 by Tenrikyo Doyusha Publishing Company, Tracing the Model Path: A Close Look into The Life of Oyasama presents an English translation of Hinagata kiko—Tenrikyo kyoso den saiken, which was compiled from discussions among four Tenrikyo researchers with different areas of specialization and originally published in Japanese in 1993. Tracing Oyasama’s footsteps on the path of the Divine Model, the book seeks to provide an in-depth view into The Life of Oyasama, Foundress of Tenrikyo.

Well illustrated with maps, diagrams, photographs, and charts, Tracing the Model Path also provides chronologies of relevant events and a number of information boxes covering social and historical background, traditional cultural values and practices, and some early followers’ experiences in faith. Other features worth noting include numerous footnotes providing additional information, as well as a general index and an index of illustrations.

Take a look inside at www.kt2hf.com/sample_page/hinagata/