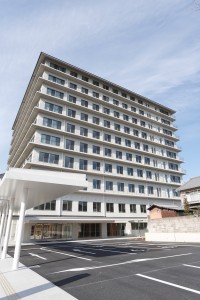 The construction of Ikoi-no-Ie Inpatient Center, which had been underway since November 2011, was completed at Bessho, Tenri, in January 2014. Upon the completion of the building, Ikoi-no-Ie Hospital held a celebration ceremony on January 12, 2014, with the presence of many distinguished guests including the Shinbashira and his wife, his successor-designate, Daisuke Nakayama, Director-in-Chief of Religious Affairs Hiroaki Yamazawa, and Director-in-Chief of Administrative Affairs Yoshitaro Ueda, as well as about 200 people who were involved with Ikoi-no-Ie Hospital or the construction work. The completion of the new Inpatient Center—which followed a series of improvements to Ikoi-no-Ie Hospital such as opening Shirakawa Branch Hospital in 2003 and the Outpatient Center in 2006—brought great joy to all parties concerned.

At 9:00 a.m., a service to offer thanks to God was performed in the South Worship Hall of Church Headquarters with Rev. Ueda officiating. The participants expressed gratitude for having been able to complete the construction work, which had lasted for about two years.

At 10:00 a.m., the Shinbashira and his wife as well as Successor-Designate Daisuke Nakayama arrived at the new Inpatient Center. They cut the ribbon at the entrance hall and proceeded to the first floor of the building, where Ikoi-no-Ie Hospital President Hidehiro Okumura reported on the construction and explained the facility. After making rounds to see the interior of the building, the guests moved up to the fourth floor and walked over the newly constructed connecting bridge to the adjacent Outpatient Center, where they attended the ceremony at its waiting lounge on the first floor.

At the ceremony, the Shinbashira delivered an address. After expressing appreciation for the great efforts of the parties concerned, he looked back on the history of Ikoi-no-Ie Hospital, which was founded as part of Tenri Seminary in 1935 based on Tenrikyo’s teaching of universal salvation. He stated that the mission of Ikoi-no-Ie Hospital is to take care of those who are suffering from illness with loving-kindness so as to guide them to implement the Joyous Life. He went on to say that the hospital is characterized by its attitude of exerting the full measure of dedication and kindness in pursuing the salvation of sufferers through the joint efforts of its three departments—namely, the Medical Treatment Department, which provides medical care, the Religious Guidance Department, which offers emotional and spiritual care, and the Service Department, which deals with various issues of life including post-recovery issues.

He then explained the stance of mind to be adopted by those who are involved with the hospital by quoting three Ofudesaki verses, which read: “The reason Tsukihi began human beings was the desire to see you lead a joyous life” (XIV:25); and “Though there should be nothing called illness in human beings, no one knows the beginning of this world. / Because of My desire to have you know this, I began doctors and medicine for weeding and fertilizing” (IX:10–11). He said: “What we should bear in mind is that receiving the blessings of salvation from illness or other troubles is not the goal of our salvation work. Rather, we should inquire into the intention of God the Parent, who grants us the blessings of salvation. It is of prime importance to remember that the purpose of medication or medical treatment—taught as weeding and fertilizing—is not limited to curing patients’ illness. It is also to help them settle in their minds the intention of God the Parent.”

Pointing out that what truly makes Ikoi-no-Ie (literally “house of rest”) a House of Rest is the fact that the hospital is run based on our conviction of faith, he emphasized that the most important thing is to continue to inherit and develop the enthusiasm and faith of successive predecessors—who have played a part in universal salvation to respond to Oyasama’s parental desire for single-hearted salvation—without being swayed by the current of the times or the changes in society.

Also, mentioning that the hospital marked a new chapter in its history when it was relocated from its original site to the Oyasato-yakata building-complex, which is intended to help us melt into the mind of the Parent and savor the joyous harmony of the Parent and children, he said: “The important thing is to connect our minds with the mind of God the Parent and Oyasama, make a sincere effort to straightforwardly follow Her Divine Model, and internalize the teachings by implementing them in the course of daily life. That is to say, our mission is to impart the joy of faith to those who stay at Ikoi-no-Ie for medical treatment. . . . We must critically reflect on ourselves with regard to everything, always using the teachings as our dependable guide.”

Furthermore, saying that we are in the middle of the season leading up to the 130th Anniversary of Oyasama, he asked those concerned with the hospital to exert their efforts to make Ikoi-no-Ie Hospital an indispensable place where people who are beset by illness and return to the Home of the Parent can feel a sense of security and joy at being at their original home, thereby regaining health in body and mind and discovering the hope to live the Joyous Life.

Before concluding his address, he said: “Ikoi-no-Ie Hospital is not merely a well-equipped medical facility that provides advanced medical care. Let all of us join our efforts to realize its ideal and draw closer to the mind of Oyasama, who is working to hasten world salvation.”

In response to the Shinbashira’s address, Tenri Yorozu-sodansho Foundation Executive Director Ichiro Yokoyama expressed his gratitude to the Shinbashira on behalf of the participants. A reception was then held at the assembly hall on the fifth floor of the Outpatient Center.

Ikoi-no-Ie Inpatient Center
The newly constructed Inpatient Center consists of the east and west wings, both of which are located to the north of the Outpatient Center, which was opened in 2006. The construction was proposed due to the concern that the former Inpatient Center in West Right Wings 2 and 3 of the Oyasato-yakata building-complex was both aging after 47 years of use and crowded because of a rapid increase in the number of inpatients.

The new Impatient Center is built of reinforced concrete (partly steel). The west wing has 10 stories above ground and one below, whereas the east wing has five stories above ground. The building occupies 11,014 square meters (118,600 ft2), and its total floor space is 36,145 square meters (389,100 ft2). It is a 512-bed facility that includes 111 private bedrooms as well as double and quad bedrooms, all of which are arranged facing an atrium that helps to fill the bedrooms with natural light. The entrance is on the east side of the first floor of the east wing, which has a connecting bridge on the fourth floor to access the Outpatient Center.

The west wing houses a 15-bed emergency room on the first floor and 10 operating rooms on the second floor, all of which are designed to maximize space to serve their purposes. 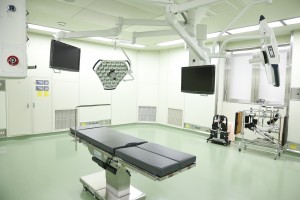 One of the operating rooms is a hybrid operating room equipped with a high-end fluoroscopy system. There are a total of 10 elevators in the building including the ones for carrying a stretcher and for emergency use.

The original Inpatient Center with 815 beds is to be partly renovated and continues to be used as an approximately 300-bed facility that includes a palliative care unit as well as the hospital’s administrative office.