On January 26, 2010, the Shinbashira led the congregation in the Spring Grand Service—which commemorates the lunar calendar date of January 26, 1887, the day when Oyasama withdrew from physical life—at the Main Sanctuary of Tenrikyo Church Headquarters. The weather forecast for the day was cloudy. The skies above the Home of the Parent were filled with thick clouds since morning.

Prior to the start of the Service at 11:30 a.m., the Shinbashira served Oyasama Her lunch at the Foundress’ Sanctuary. When the appointed time came, he then paid respects at the Foundress’ Sanctuary and the Memorial Hall together with the Service performers before they all proceeded to the Main Sanctuary. The thick clouds seemed to have been waiting for that moment to disperse and reveal a clear blue sky. 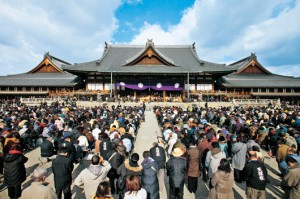 In his prayer, the Shinbashira declared: “This day today commemorates the significant and memorable day when Oyasama, out of Her parental love for humankind, Her children, opened the portals of the Shrine by shortening Her term of life by 25 years to step out and level the ground. We Service performers, therefore, will now conduct the Spring Grand Service by performing the Kagura Service and the Dance with Hand Movements with our minds in unison.”

He further said: “Today, all of us, including church head ministers and Yoboku, will once again take to heart the significance of the Service, which Oyasama urged us to perform out of Her deep parental love, as well as the truth of the Sazuke, which She bestows widely upon us. We are resolved to exert our utmost sincerity in proactively sharing the Parent’s intention with those suffering from various kinds of problems and guide them to the path leading to salvation.”

By the time the Kagura Service and the Dance with Hand Movements were performed, it had become a fine sunny day. The four worship halls in addition to the 4,200 benches that had been set up in the Inner Courtyard and in front of the South Worship Hall were filled with followers singing the Mikagura-uta, The Songs for the Service. The Service then concluded eight minutes before the daily 2:00 p.m. siren that sounds to signal the time Oyasama withdrew from physical life.

In his sermon (click here for full text), the Shinbashira first described the circumstances leading up to the lunar calendar date of January 26, 1887, the day of origin of the Spring Grand Service. He then related that Oyasama listened to the sounds of the Service contentedly and that not a single police officer appeared on that day because She had accepted the sincerity of the followers who had cast away their self-centered human thinking to perform the Service in single-heartedness with God. He then went on to warn that, while the Service today might have a sufficient number of performers, it would not do to be deficient in our single-heartedness with God and the harmony of unity of mind in its performance.

The Shinbashira further noted the gap between the minds of the children, humans, that pray to be blessed according to what they desire and the mind of the Parent that taught the Service in order to guide us to the Joyous Life. He stated that we ought to be grateful not simply for being saved from suffering and distress, but for being guided to the path of salvation that helps us reform the way we live and rewrite our destiny. 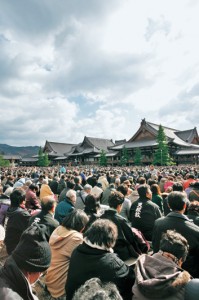 The Shinbashira spent much of the remainder of his sermon on the topic of joyous family togetherness, which he had brought up in his sermon exactly one year before, and mentioned how the Divine Model serves as an example of living a life thoroughly dedicated to the intention of God the Parent. The Shinbashira closed his sermon by quoting a Divine Direction delivered on July 20, 1902—“Adorn your mind with brocade, not your body. The mind clothed with brocade is the desire of God”—before asking all Yoboku to make strides toward world salvation.