Home News Tenrikyo Associations Announce Their Guidelines and Plans for 2014

Tenrikyo Associations Announce Their Guidelines and Plans for 2014

Between January 25 and 28—around the day of the Spring Grand Service—the Women’s Association, the Young Men’s Association, and the Boys and Girls Association held their respective first meetings of the year and announced their activity guidelines and plans for this year. 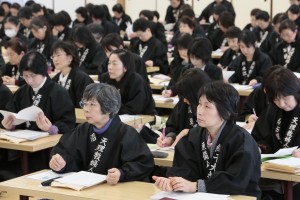 On January 27 and 28, Tenrikyo Women’s Association held a seminar for the chairwomen of directly supervised chapters and diocese chapters at Moya 38 with an attendance of 255 people. The association announced that it will continue to promote its slogan for spiritual maturity, “Let’s follow the Divine Model and become the foundation for the Joyous Life,” as well as its activity guidelines: “Let all of us Women’s Association members follow the path of making repayment for the blessings we receive. (1) Let’s implement the teachings and grow spiritually to be true Yoboku. (2) Let’s nurture those close to us into true Yoboku.”

At the seminar, Association President Harue Nakayama delivered her address. Referring to the Shinbashira’s sermon at the Spring Grand Service, she spoke about the Service that Oyasama taught as a fundamental component of the path of single-hearted salvation and hastened us to perform even by shortening Her term of life. After saying, “Performing the service exactly as taught by Oyasama is the primary mission of Tenrikyo churches,” she pointed out that it is important for all Yoboku and followers to connect themselves with their churches in order to make progress in their spiritual growth.

The president then requested that branch chapter chairwomen reach out to followers, encourage them to visit their churches, and try to create a congenial atmosphere at their churches whereby people will feel like visiting again. She said, “I believe that our most important task is to make sincere efforts so that we can be blessed with the state of churches that brings joy to God the Parent.”

She next mentioned that the Seminar for Branch Chapter Chairwomen will be held in the Home of the Parent between August and November this year; the seminar is designed to provide those chairwomen with an opportunity to receive the truth of Jiba and pledge together to make further progress in the anniversary-related activities. After noting that the chairwomen should bear in mind their role of nurturing others into true Yoboku, the president concluded her address by encouraging the participants to rely on the parental heart of God the Parent and Oyasama and live each day in high spirits with the mind of making repayment for the blessings they receive.

In addition to the Seminar for Branch Chapter Chairwomen, the association is scheduled to hold various events and activities this year. The annual Women’s Association Convention will be held in the Inner Courtyard of Church Headquarters on April 19. Other activities include regular events such as the Lecture for Mothers and various seminars, as well as hinokishin activities.

On January 27, the Boys and Girls Association leaders’ first meeting of the year was held in Dining Hall 2, drawing 1,738 participants—including heads of directly supervised chapters and diocese chapters as well as members of the nurturing committees of those chapters.

The meeting began with an address by the Shinbashira, who also serves as president of the association. Having made reference to the present season leading up to Oyasama’s anniversary, he spoke on things that the participants need to bear in mind so as to nurture boys and girls who will carry the path forward in the next generation.

Following the Shinbashira’s address, Association Chairman Daiichi Umetani announced the guidelines for association activities this year: “Let us embody an attitude of hinokishin and nurture children who put the teachings into practice.” He explained that the guidelines remain unchanged from the year before last so that the association members can further promote them. He then said, “What is more, we adult leaders must also implement the teachings honestly and straightforwardly in order to make progress in our spiritual growth together with our children, thereby bringing ourselves closer to the parental heart of single-hearted salvation.”

Mentioning that the association will be in its 50th year in 2016 (Tenrikyo 179), he put emphasis on promoting activities that reflect the original intention in founding the association and heightening adult leaders’ awareness of nurturing children. He then said to the participants, “I want you to conduct various seminars and study meetings, including the ‘Vertical Mission Seminar’ and ‘Nurturing Seminar,’ and encourage adult leaders around you to actively participate in those events.”

The points of emphasis for this year’s Children’s Pilgrimage to Jiba were announced as follows: (1) “Let every church form a pilgrimage group” and (2) “Let us work to be blessed with first-time participants.”

On January 25, Tenrikyo Young Men’s Association held this year’s first meeting, which was attended by about 250 people, including chapter chairmen from directly supervised churches and dioceses.

At the meeting, Association Chairman Masanao Nakayama announced the association’s guidelines: “Increase the number of active members and grow spiritually.” He explained the guidelines, saying: “Just participating in activities and events will not make us active members. We intend to increase those members who maintain the awareness of being Arakitoryo, pioneers of the path, and who make daily efforts to sprinkle the fragrance of the teachings and help others be saved.”

He then talked about an upcoming event called Gatherings to Build Momentum for Salvation, which will be held at all directly supervised chapters between July and December this year after the conclusion of the Oyasama 130th Anniversary Yoboku Gatherings. The program of the Gatherings to Build Momentum for Salvation includes a lecture given by a committee member of the association headquarters and missionary activities. Expressing his hope that the gatherings will add momentum to other association activities, Chairman Nakayama encouraged active participation in the events. He said, “I hope that as many members as possible, besides those who take a leading role in association activities, will attend the gatherings.” He continued, “By making the gatherings a driving force, I want all directly supervised chapters to promote the activities that they resolved to counduct.”

Toward the end of his address, Chairman Nakayama touched upon one of the points of emphasis for the association activities, “Promoting the Hinokishin Corps.” After noting that this year marks the 60th anniversary of the Oyasato Construction Young Men’s Association Hinokishin Corps, he requested that all directly supervised chapters strive to achieve their own targeted number of participants in the corps and put more efforts into increasing the number of young participants and first-time participants in the corps.

The association’s main activities for this year include the 90th Young Men’s Association Convention—commemorating the 60th Anniversary of Young Men’s Association Hinokishin Corps—to be held in the Inner Courtyard of Church Headquarters from 10:00 a.m. on October 27. Activities of directly supervised chapters include the association’s Missionary Campaign Week for All Chapters, scheduled for the week of September 7–14. As for regional activities, the association encourages members to participate with their families in the Heart-Clean Campaign, which is held on the first Sunday of each month expect in January and August (second Sunday) and in September (third Sunday). This year’s Action Day for the campaign will be conducted on July 6. Moreover, as part of activities to nurture young members, directly supervised chapters will conduct the Arakitoryo Orientation, which targets high-school-age members, between March and August.