The 36th English class of Shuyoka (the three-month Spiritual Development Course), which is drawing to a close, began in the Home of the Parent on April 1 as part of the 828th session of Shuyoka, which has a total of 523 students (as of June 21). This year, 30 participants have gathered from nine countries and regions: seven each from Hawaii and the Philippines, five from Myanmar, three each from India and Nepal, two from Kenya, and one each from Botswana, Canada, and the U.S. mainland. The instructors for this year’s English class are Rev. Motonao Yasui, staff member of Tenrikyo Overseas Department, and Rev. Colin Tsuneo Saito, head minister of Honolulu Church in Hawaii. Rev. Yasui serves as the homeroom instructor and teaches the classes on The Doctrine of Tenrikyo and the service dance, while Rev. Saito teaches the classes on The Life of Oyasama and the Mikagura-uta, The Songs for the Service. 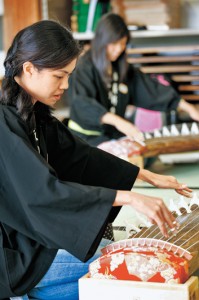 Prior to the start of Shuyoka, the Overseas Department conducted a weeklong preliminary training session at Moya 132, aiming to help the English class students get used to life in the Home of the Parent by studying and boarding together so that they could make an easier transition to life in their respective followers dormitories.

Rev. Saito, who has served as an English class instructor three times, commented as follows: “When it comes to the English class, you are not only dealing with native English speakers. You are dealing with people from multiple countries and cultures, with different levels of English ability. It is a challenge to teach the English class in that sense. Therefore, as far as my previous experiences with Shuyoka are concerned, we always utilize the Sazuke. From the very beginning we always have a number of Yoboku in our class. We arranged for them—as well as the two instructors—to administer the Sazuke at every chance we get. We organize a group session of the Sazuke administration, usually before and after hinokishin. We assign each Yoboku to do the Sazuke for sick persons, and we alternate as we go along. People who are not Yoboku—whether or not they are having the ­Sazuke administered to them—can watch and see the actual Sazuke. In the meantime, they are listening to the Besseki lectures and will eventually become Yoboku. To achieve the purpose of Shuyoka, we want to produce Yoboku who can understand and feel the love of Oyasama in their hearts and utilize the Sazuke to help others, grasp the heart of Oyasama and find good health and happiness in their lives.”

The daily schedule of Shuyoka is basically the same for all students whether in the English class or in a Japanese class. Their day starts with going to the Main Sanctuary for the morning service. After the service, they return to their dormitories and engage in a morning training program before departing for Shuyoka. In the mornings, they attend classes on The Doctrine of Tenrikyo, The Life of Oyasama, and the Mikagura-uta as well as practice sessions for the service dance. In the afternoons, students practice the musical instruments for the service and engage in hinokishin at various sites around the Home of the Parent. After returning to their dormitories, they engage in cleaning hino­kishin, attend the evening service, and participate in training programs.

In addition, they periodically have “Sanctuary cleaning”―in which the Worship Halls and Corridor are cleaned twice a day by Shuyoka students. The morning Sanctuary cleaning starts an hour before the morning service, thus making it necessary for Shu­yoka students to rise very early. Attending the Besseki lectures―three each month―is also an important part of Shuyoka life for students who have yet to receive the truth of the Sazuke. This year, 19 students of the English class became new Yoboku upon the bestowal of the Sazuke on June 22.

A Closer Look at the Students
Mrs. Kusum Kejriwal, 58, a Yoboku from Calcutta Church in India, enrolled in Shuyoka with her husband Madhusudan and daughter Mitu. When Mitu was seven months old, she was diagnosed with Alexander disease, a condition that causes mental and physical developmental delays in addition to spastic paraplegia. There is no known cure or established form of treatment. The results were the same when she was seen at hospitals in India, Singapore, and the U.S.

Seventeen years ago, Kusum was invited by a relative to come to Calcutta Church. Since then, previous head minister Akira Yamazoe and current head minister Hideki Kawaura have come to her home to administer the Sazuke to Mitu. 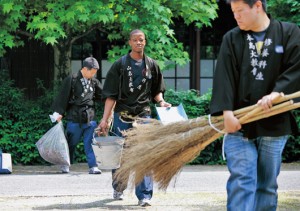 The following year, the Kejriwal family returned to Jiba and Mitu was seen at Ikoi-no-Ie Hospital. The examination results were still the same.
However, when Mitu was reexamined at Ikoi-no-Ie Hospital four years ago during the year of the 120th Anniversary of Oyasama, the doctor found that she did not have Alexander disease after all but a different disease that had only recently been discovered. The family saw a ray of hope as the doctor said that there have been cases where patients of this disease showed some improvement.

Kusum says: “Mitu seems truly happy when she returns to Jiba. In Shuyoka, people of different nationalities, sexes, and ages pray for and administer the Sazuke to Mitu. I’m so thankful.”

Among other students there are some who have made their own discoveries by putting the teachings into practice through doing hinokishin and administering the Sazuke.

Mr. Jensen So, 27, of the U.S., was encouraged to enroll in Shuyoka by his mother, Rev. Lynn So, the head minister of Taitan Church. He had previously participated in the English Course of the Oyasato Seminar and had casually thought to himself that he was getting yet another chance to live in Jiba.

As he made efforts in this way, Jensen thought to himself about what he could do to draw closer to the true sincerity God the Parent desires of us. “Just the fact that I’ve been able to seriously come to grips with my faith shows how big a change I’ve gone through. I’d like to use the remaining time I have to do my best every day and try in my own way to come up with how I can attain a mind of true sincerity.”